Today is the anniversary of the death of one of my personal hero's, Dorothy Day, who was born in Brooklyn, NY and died November 29, 1980 at age 84 years. If ever there was the common person’s saint, Dorothy is it. Unlike plastic saints this is a woman who struggled through life trying to find her purpose and making a lot of mistakes on the way. She is someone all of us sinners can relate to. 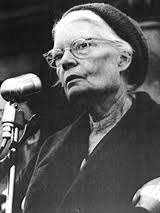 She was raised in San Francisco and Chicago. She was greatly influenced by the books she read about the social order and was moved by the poverty she saw as well as the situation of the worker. She attended the University of Illinois but dropped out after a couple of years. Moving to New York she found a job writing for the city’s only socialist daily newspaper. She lived a bohemian life. She scraped by buying her clothes at discount outfits to save money. She was active in anti war and women suffrage movements. In 1917 she, along with a number of other women all went to prison for protesting in front of the white house for women’s right to vote. They were treated badly and went on a hunger strike which finally resulted in their release.

She was convinced that the social order was unfair to the ordinary person and the worker. She was a socialist who was attracted to communist ideas, but she was also developing a spiritual awareness. In 1922 she roomed with three other women who went to Mass each day. Their spirituality greatly moved her. Later, when she got a job in New Orleans she would often attend evening services at the Catholic Cathedral. Moving back to New York in 1924 she bought a beach cottage on Staten Island using movie rights money for a novel she had written.

Then she met Forster Batterham who was an English botanist who was an anarchist, opposed to all religion and marriage. They began a common law marriage. However, even as Dorothy’s faith was becoming stronger his non belief was just as strong. She became pregnant. In fact, this was the second time she had been pregnant. Years before she had an affair with another journalist she was living with, but she terminated the pregnancy with an abortion. Now, she was determined to have the child, while Batterham thought it was wrong to bring a child into the cruel world he saw around him. There was conflict between them. She had the baby, Tamar Theresa Day in 1927 and decided Tomar should be baptized in the Catholic church, something Batterham strongly objected to. She went ahead anyway with the baptism which was the cause of a separation between them.

Dorothy then was baptized a Catholic as well. She and the baby were living in a apartment in New York when Peter Maurin, a French immigrant and former Christian brother, found her and proposed she used her journalism skills to publish a paper to publicize the needs of the poor and the workers as well as to provide food and shelter for the homeless and poor of New York. Peter was a deeply spiritual man who had adopted poverty and prayer. His dream was self sustaining farms for the ordinary person and to provide for the homeless. Dorothy was attracted to the idea and used her journalism skills to create The Catholic Worker, a thin newspaper which they sold for a penny a copy. It called for changes in the social order, took the side of the labor union and was anti war.

The down and out who read it, began to come knocking on the apartment door looking for a place to stay. She and Peter found a larger apartment that they rented which could accommodate ten women. The project continued to grow when they rented a house in Greenwich Village and then two buildings in Chinatown. Soup and bread was provided and a place to stay. The publicity about this attracted many volunteers and then grew into a national movement with similar Catholic Worker houses around the country.

During World War II Dorothy and the Catholic Worker movement remained pacifists which caused many supporters to become angry and contributions dwindle. She stayed true to her belief's in spite of the opposition. As part of her pacifist conviction, In the 1950's she and the movement refused to participate in the atom bomb drills. She and others were arrested and jailed for this. But, the crowds of support grew larger it was impossible to control and authorities left them alone.

Dorothy and the Catholic Worker movement were strong civil rights activists. She visited the South and participated in civil rights movements there. They were also strong supporters of the farm workers. She traveled to support the farm worker. All of this made her and the movement controversial, but Dorothy was always the calm eye in the storm. A daily communicant whose life was centered in prayer she was already being regarded as a saint in the latter years of her life, something she rejected firmly.

She continued to live her life into her eighty's as she had throughout her life. Living in poverty, providing food and place to stay for the homeless, as well as a very spiritual life of prayer. If we were to sum up this amazing woman’s life it would that she lived her life totally in love of neighbor. She was always living in poverty. She was often opposed not just by civil authority but by church leaders whose own lives were often closer to that of the rich then the poor. Through it all she treated all with great charity, humility and consistent love of the poor, the needy and the cast off’s of society.

She was proposed for sainthood shortly after her death and in 1983 Pope John Paul II granted the Archdiocesse of New York permission to open her cause in March of 2000. She was declared "a servant of God" in the eyes of the Church.

If you would like to know more about this amazing woman, she has written many books and much has been written about her. Her diaries have been published as The Duty of Delight: The Diaries of Dorothy Day edited by Robert Ellsberg. One of the best biographies is by Jim Forest Love is the Measure: A Biography of Dorothy Day. May her soul rest in peace.