Lita and I just returned from a short trip to Alaska where I gave a talk to the Alaska Trial Lawyers and I was again struck by the raw beauty of this great state. I first saw Alaska in high school when I began working  on the the Anacortes purse seine boats. I started  out as a 9th grader working in the skiff and boats with a crew of grown men, many of whom were from Croatia and spoke limited English. I continued fishing every summer through most of college over a period of years. 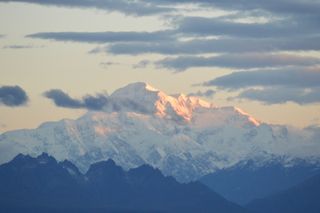 Depending on the size of the boats the crew could  be seven to nine men living together on a small ship. We  slept in bunks below decks near the engine and ate in a small galley area.We would  leave  with the other salmon boats from Anacortes in  late May and head for Alaska. We were loaded with groceries, tobacco,  wine and some liquor. The refrigeration was an ice container so we had little perishable goods. We moved along at about 7  or maybe 8 knots top speed going 24 hours a day taking turns around the clock steering the boat.

(PHOTO I TOOK FROM OUR ROOM WINDOW) )

This was before there were restrictions on areas of fishing so we fished in different areas. One year we traveled all the Aleutian chain and Bering Sea area. We fished Kodiak Island areas and Southeast Alaska around Ketchikan until it was time to return to  Puget Sound for the summer fishing which would last until I returned  to school  in September. The scenery  was  beautiful  and rugged. Small towns  and villiages. Fish canneries  in remote areas and an scenery that was unique.

Lita and I have been to Alaska many times over the years to fly fish and sports fish, but it had been a few years when I was invited to give this talk. Plus, it was at a resort at Talkeetna which is the base area for climbers who plan climbing Mt McKinley and the surrounding peaks which we had never seen before  so I accepted the invitation.

We flew from Seattle to Anchorage and spent the night at the Captain Cook hotel that has been there forever. In the morning we got on the Alaska Railroad train that runs to Fairbanks. it was a three hour train ride on an overcast and even rainy day. We had great seats in an observation car, but there wasn't much to see due to the weather.

We arrived at Talkeetna, which has a year around population of some 750 plus people, but it is the gateway to the national park area of Denali. There is an airfield with a lot of plane traffic. Climbers leave here  and  fly  to the  10,000 base camp to start their climb of McKinley (or as the locals prefer to call  it: Denali) In good weather, which is usually rare, small planes are continually taking off and  landing. They fly  people into the mountain range for a view and fly  them elsewhere. The local claim is that you can see  Denali  ten times a year if  you are fortunate. The rest  of the  time the Alaskan range is covered by clouds. The second day we arrived it began clearing and we could see the mountains. The next  day was totally clear and the entire range was clearly visible although many miles away. It was spectacular and we are lucky to have had the view.

There was  a shuttle to town so we  took it  and walked around the few stores. There are several places to eat and  there was a small market on Saturday with local crafts. There isn't  much there, but it was interesting. There was a wedding  below our room on the day after my talk. About 150 guests  were seated on a large porch area. The bride wore a beautiful gown and the mountains were shinning in the sun. It  was quite a sight.

We arranged a ride from the  lodge back to the Anchorage airport on Sunday. From there we flew  back to Seattle and were home by Sunday around 5:30 or so. We had flown to Alaska Thursday, so it was short trip, but  on the flight  out of Anchorage the snow covered mountains were absolutely beautiful and not very far below us. Another great Alaska view.

I'm glad we made the trip although it was tiring, but one can never tire of seeing the beauty of Alaska.