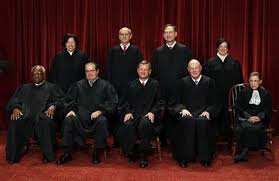 the right to terminate their law license. Virtually every state has a code of ethical conduct for state judges, including their highest court judges, with sanctions, including loss the right  to serve as a judge. The United States federal district and appellate judges are likewise governed by a code of judicial ethics with provisions to sanction for ethical violations. Well,federal judges with one glaring exception:  the United States Supreme Court. As  pointed out in the National Law Journal on August 19, 2013,  our Supreme Court has elected  not to adopt a code of ethical conduct other than the individual member's interpretation of judicial ethics. No outside body has any power of enforcing judicial ethics on the members of the court in the same way other federal judges are governed.

Three United States Senator's have joined sixteen House members in introducing a proposed law creating a code of ethics for the United States Supreme Court justices. They cite  the need based upon such ethical misconduct as  appearances of members of the court at fund raisers for partisan groups, participation in political partisan gatherings as  well as sitting in cases involving conflicts of interest and the failure to report the income of their spouses from political activities. We have seen on more than one occasion a refusal of a Justice to recuse themselves in high profile cases where any other federal judge would have been required to do so or suffer discipline. Members have been unconcerned about the appearness of fairness.

Justice Antonin Scalia and Justice Clarence Thomas have attended partisan gatherings where political strategy was being  plotted. Justice Samuel Alito has participated in fund raising for the conservative American Spectator. Justice Clarence Thomas failed, for six years, to report the income from his wife while she worked for conservative groups who promoted positions which reached the Court and which Thomas participated  in deciding without telling anyone.

These are just a few examples of ethical violations in the absence of any meaningful ethical code of judicial conduct. So, what is the response of the Court to this obvious need for change? Chief Justice Roberts responded defensively to calls for the court to adopt an ethics code and rejected the notion that it was needed. He is not alone as the chief violators take  the position they do not need a code of conduct. Of course, that makes  them virtually the only group in the United States that has no enforceable code  of ethical conduct to follow other then their own arbitrary interpretations. This is hardly the kind of example our nation's highest court should be setting. They should be, instead, like Cesar's wife – above reproach,instead of acting like royalty who are above the law.

A recent Gallup poll shows that for the first time more people have an unfavorable rather than a favorable view of the court. Their conduct deserves the public reputation they have earned.