On August  4th 19 year old Katie Lentz was hit head on while driving on a Missouri highway. It happened 9 am on Sunday morning. She was on a rural road with traffic backed up in each direction. She was trapped

in the twisted wreckage but conscious. The emergency workers and police could not extricate her with the “jaws of death” they had with them after 45 minutes of trying. The trapped girl had asked the workers to please pray for her when a Catholic priest with his priest clothes appeared. He asked to anoint her with holy oil and reached in doing so. He prayed for her and about that time the larger equipment to extricate her arrived. The girl was removed and flown to the hospital, but the priest had disappeared. No one seemed to know who he was and the media began a search to find out his identity. Over eighty photos were taken  at the scene and were examined to see if he was photographed, but no photo showed a priest at the scene. Soon the media was asking: “Did an ‘angel’ priest visit  this Missouri crash site that Sunday morning?"

When I read about it, I immediately thought of bilocation of saintly people identified  as being present in two places at the same time. The most historically recent person who was reported as having done this was Padre Pio, an Italian priest, but other spiritual and religious people have been reported over the centuries as having been documented for being seen in two places at the same time associated with a spiritual mission. One of Padre Pio’s reported bilocation’s (there were  several) involved Father Alberto in 1917 who walked  into a room at the Giovanni Rotondo monastery where Padre Pio was standing looking out  the window talking to himself. He approached and heard Pio clearly giving confessional absolution to someone. Father Alberto wrote that Pio then shook himself as waking up, saw him and said “you are here.I did not see you.”  Several days later a telegram was sent to the monastery thanking his superior for sending Padre Pio to Turin to be with a dying man on the very day and time Fr. Alberto had been with him many miles away.

Padre Pio s someone I’ve been devoted to and known about since my childhood. He died in Italy
1968 when I was thirty three years old. Known throughout the world for his holiness he was declared a saint in 2002. Over 300,000 people attended the ceremony. So, I was fully prepared to
accept the possibility it was a case of some holy person’s spiritual bilocation.

Well, it turns out there was an angel at Katie Lentz’s accident scene and he turned out to be Missouri 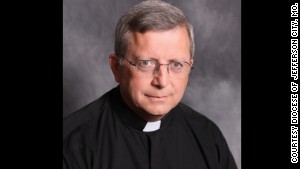 priest Father Patrick Downing, who had said Sunday Mass at a nearby town and was returning to his home parish when he came on the accident scene and after helping and praying for her left. After he was identified he said that:

I absolved and anointed Katie, and, at her request, prayed that her leg would not hurt. Then I stepped
aside to where some rescue personnel and the pilot was waiting, and prayed the rosary silently. I left when the helicopter was about to take off, and before I got to my car it was on its way to Quincy.

I think there may have been angels there too and, in this context, I congratulate the fire team from
New London and Hannibal, the Sheriff/deputies of Ralls County, the Highway Patrol personnel, the helicopter team, the nurses and all who worked so rofessionally. God has blessed your work. I hope the credit goes where it is due.

Well, I would have liked to been able to report an authentic angelic biolaction, but I'm just as pleased to learn about a real, living roadside angel who took the time to stop and do what he could. He prayed for her and that can be as powerful as using the jaws of death.