I've written about this extraorindary woman every year since her death. Elizabeth (Betty) Catherine Devitt, who was born December 5, 1910 in Butte,Montana and died December 20, 1985 in Puyallup. Her children included my wife, Lita, Devitt (deceased) Hollis, Barbara and Monica. She was a very remarkable woman in so many respects. She was also someone for whom I had a great deal of admiration, respect and love. For a complete biography of this amazing person please see https://paulluverajournalonline.com/weblog/2012/12/elizabeth-catherine-barnett-1910-1995.html.html     I loved and admired this woman and I think of her often. So, this is to my friend Betty Barnett. 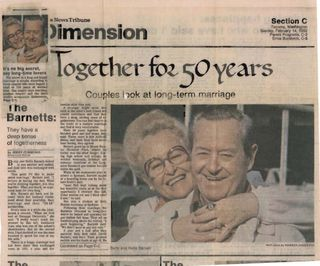 Betty's parents were Merritt John Devitt and Elizabeth McCarthy Devitt. She was baptized at St Patrick’s Catholic Church in Butte. She had a brother Jack and a half sister Doris Frasher Crowley from a previous marriage of her mother. At the time, her father was working as a miner in Butte. Later the family moved from Butte to Libby, Montana and then moved again to Spokane, Washington. In Spokane Betty attended Holy Names Grade School then continued at Holy Names High School. The Holy Names nuns taught the girls good manners, proper table settings and other social skills along with the normal courses.

When she was a senior in high school she met Hollis Barnett who was attending nearby Gonzaga University. They fell in love and were married November 16, 1931 at St James Cathedral in Seattle. It was a love affair that was to last for over fifty years of marriage. After the marriage Hollis dropped out of college to get work to support them. Times were difficult, but he found a job operating a gas station in Seattle so they moved there.

In 1937 Hollis was offered the operation of a small gas station located at Longmire inside Mount Rainer National Park. There was a only a very small apartment over the gas station and that became their home. Later Hollis learned that land owned by Judge Hall, who was the park commissioner, was for sale so he decided he wanted to buy it. The property was located right at the entrance to the park and he decided it was an ideal location for a gas station and restaurant. With the help of friends Hollis managed to buy the property and built a restaurant with a small room in the back where they lived. Log cabins to rent to people to spend the night were later added. Their son Devitt was born in 1933, followed by Hollis in 1939 and then Barbara in 1940. With a growing family the began to build a small house next to the restaurant in 1941. Monica was born in 1943 and Lita in 1950. This was a family run resort that served food, sold gas and provided small log cabins for overnight guests. They also rented ski equipment and had a small store inside as well. Everyone in the family worked at the resort.

Betty had many accomplishments and she loved poetry and literature. One of her favorite poems, which I read at her funeral, was by Sam Walter Foss: The House by the Side of the Road The poem concludes with words that I always felt represented how she felt about her fellow neighbor:

In addition to loving poetry, whe wrote some herself. On of her poems is this untitled one that I like a lot:

"The snow floats gently on my roof tonight from mountain clouds of high, while stepping gently past my door the gentle deer goes by.

The firelight flickers in this country inn, the pictures look down from the wall; the conviction is strong, but mournful too, each child must answer his call.

Time rushes on severing the span of youth. Was it yesterday one of them said ‘if I say my prayers and brush my teeth, could I maybe sleep in your bed?’

From memory;’s halls of yester years a hollow echo rings; The pictures smile and prove again, Life and youth are born on wings.

My fire is low and I hear the song lilting round a mountain high; Where the fir’s dark shadows paint the ground with a refrain pastel and shy.

If walking tall through life’s circuitous path along the horizons rim; You smile as you meet each stranger’s wrath , the shadows of life will be dim"

Another example of her skill as a poet and writer of prose is the following:

"In a wilderness Inn on a country road many people have talked of their life and abode; Each one is seeking a tension release by communing with nature. They are seeking peace,

An age old wisdom reminds us anew yesterdays errors are made not by the few; Those wise ones that work for a better tomorrow, They are the ones with the lessor sorrow.

The haunts of the forest and its inspired streams import to a lonely one the fantasy of dreams; Man’s destiny is shaped by everyday life. Conquering the evil and facing the strife. Alas, inherent in man is a myth that is strong others will succumb but I will live.