I'm reading Bill Bryson's book One Summer in America about events in 1920's. I was reminded of the fact that France had seized Germany's industrial center for failure of the German's to keep up with their reparation payments dictated by the truce that ended World War I. The result was inflation out of control. The German Mark had traded at 4 to the dollar before the war and now shot up to 600,000 to the dollar. Prices began to double daily and then hourly. In a short time it was 630 billion Marks to the dollar. People needed wheelbarrows or baby carriages to carry enough paper money for daily living. A street car ride that cost 1 Mark was now 15 Billion marks. 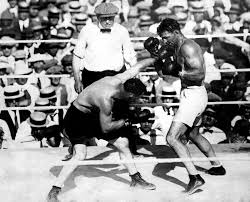 There are a lot of facts I didn't know about and one of them involves the great boxer Jack Dempsey. After a three year retirement, Dempsey agreed to fight Jack Sharkey who was a 6-5 favorite because Sharkey was twenty five years old and Dempsey was thirty two plus he had not fought in three years. For six rounds Sharkey was ahead on points, but in the seventh he made a fatal mistake. Frustrated by Dempsey's low blows, he  turned to the referee to complain. Dempsey took advantage of the situation and knocked him out cold.

The great tennis player Bill Tilden didn't start playing tennis until he was twenty seven years old but became one of the world's best players at that time as well as probably the best who had ever lived. He was number one in the world for seven straight years and never lost a match during that time. In 1925 when he was thirty two years old he won 57 straight games.

Originally early automobiles put the driving wheel on the right side of the car so that the driver could step out on a dry grass area or the wooden sidewalk to avoid the unpaved and muddy road conditions. Ford's Model T was the first car to change the arrangement figuring that women passengers would benefit and to give the driver a better view down the road. By the way Ford's famous assembly lines were not kind to workers. They were not allowed to talk, hum, whistle, sit, lean or otherwise have a break. They got one thirty minute break per shift. In 1914 Ford introduced the 8 hour work day and forty hour week plus doubling salary to $5 per day. It turns out he did so to avoid the enormous employee turn over with workers quitting their job. At it's peak a new car, truck or tractor rolled off a Ford assembly line in a Ford plant every ten seconds. With increasing profits Ford reduced the price of the car from $850 in 1908 to $260 by 1927.

In Babe Ruth's first year in New York, Yankee attendance more than doubled to 1,289,000. Owner Jacob Ruppert began building a new stadium. When finished it cost $2.5 million and was 50% bigger than the previous one. From the day it opened it was known as "the House that Ruth Built." Dozens of people would come to his hotel room (he stayed at better accommodations than the other players) and most of them he didn't know. Once someone counted 250 people who came by to see him in one evening. He loved women and food. Once he was seen downing 18 hot dogs in one sitting. He was an incredible hitter. In 1920 he hit 54 home runs when no other player reached even 20. In 1921 he hit 139 home runs, more than any other player had hit in their entire career.

These are a few of the interesting stories Bryson covers in this excellent book. I hope you get a chance to enjoy it.

One thought on “BILL BRYSON’S BOOK ONE SUMMER IN AMERICA”