Last night the President gave his 15 minute speech about immigration reform. Let me digress to say that no matter which way you lean on this issue, as a trial lawyer, I need to comment on his skill of  delivery and how much can be communicated well in only 15 minutes if prepared.  His timing was perfect and his genuine sincerity was palpable. It is a model for learning to give a talk well in a very short time.

We are in Scottsdale, Arizona so you can imagine the general reaction here. Sheriff Joe Arpaio who 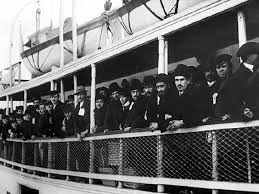 brags about being "America's Toughest Sheriff" was on TV announcing he was suing the president for exceeding his executive powers and all the rabid anti immigration foes (more border patrols and higher fences) were upset as well.

There are really two central issues here (1) whether the president has exceeded his authority and (2) what is the right solution for the existing situation. I don't intend to deal with the authority issue except to remind those who object that right or wrong Republican president Bush and his predecessor's routinely issued executive orders. I do want to examine the issue of immigration.

I have strong feelings about immigration in general and should offer the disclaimer  that I am a first generation of Italian and Croatian immigrants. I 've written about this subject and my family immigration history as well. See:

In addition, I was born and raised in Skagit County where, each year, waves of Mexican workers would come to the valley and work in the fields. Without them the famers would not have been able to operate and they  took no jobs from locals. In fact, this was before child labor regulations and most all of us local young children – 12 and old and up –  worked in the strawberries and pea harvesting process. As a result of my lif experiences I have a sympathetic view about immigrants.

With that acknowledgement, what is the legislative background in this regard? The recent history of immigration reform in Congress  involves the Senate in June 2013 passing a bipartisan immigration reform  bill  and sending it to the House of Representatives. House Republican leaders led by Speaker John Boehner, have have refused to bring the bill to the floor for consideration. At the same time they have refused to propose a bill of their own resulting in a stalemate with immigration stalled by Republican House leaders. who, of course, blame everyone other then themselves.

The Center for American Progress offers a resource of information about this subject:

What are the chief objections raised by those who feel strongly opposed to immigration reform? They can be briefly summarized  as these:

The center  argues that granting citizenship to undocumented immigrants would create jobs and increase tax revenues. They estimate that  the  undocumented workers would pay an additional $144 billion in federal, state and local taxes over a 10 year period.

Radical fear and bigotry towards immigrants is nothing new to America. In addition to the documented discrimination towards each wave of immigrants – the Chinese, the Irish and Italians – we have a history of extremism. I've written about this before: https://paulluverajournalonline.com/weblog/2007/02/p.html  In 1919 Woodrow Wilson was president and Mitchell Palmer was Attorney General. When an explosion was set off at Palmer's house it killed the Italian alien who had set it off. This and other bombings set Palmer on a program to round up and deport, without any hearing or trial, "suspected terrorists" most of whom were Italian immigrants. "Palmer's raids" resulted in thousands of people being rounded up and placed on ships to other countries. In spite of the illegality  there was widespread approval for it.

What are we to do? The anti immigration proposals involve everything from more prevention of entry as well as rounding up the estimated 11 million undocumented people from all countries and deporting them, charging employers of them with felonies and fines, denying any governmental benefits of any kind to them and variations of all of the above.

The reforms involve a variety of proposals as well including everything from granting citizenship ideas to providing documentation with a "green card" right to stay in the U.S. but denying any remedy to new immigrants who enter the country illegally after reform is adopted. The president's executive order essentially provides for additional measures to prevent unlawful entry coupled with documentation and "green card" status with a difficult path to future citizenship.

The reforms involve a variety of proposals as well including everything from granting citizenship ideas to providing documentation with a "green card" right to stay in the U.S. but denying any remedy to new immigrants who enter the country illegally after reform is adopted. The president's executive order essentially provides for additional measures to prevent unlawful entry coupled with documentation and "green card" status with a difficult path to future citizenship.

My own view is that we should have reasonable measures to guard against illegal entry from any country in the world, but they should not involve the hysterical nor the waste of taxpayer money just to gain political favor. We should reasonably enforce our immigration laws, but we need to avoid extreme measures that resemble the Palmer raids of 1919 as Sheriff Joe and his ilk would like. Most of all, we should replace compassion with bigotry where it is called for. This seems to me  to be especially appropriate involving children – those who cross  the border to escape violence, those who want to join their parents and those who have spent their young lives in this country going to school and being good, honest people.