By now everyone knows a New York state grand jury decided there was not enough evidence to file any criminal charges against the white police officer applying a neck hold and the other police involved in the arrest of a black man that resulted in his death. While the media has spent it's time focused on talking about the grand jury's failure to indict and the "guilt or innocence" of the 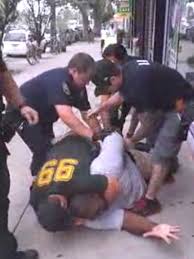 white police officer or officers, it is more complicated than that. Everyone has a viewpoint. Here's mine.

There are a lot of issues including was the police insistence on handcuffing justified? Was their method of subduing him appropriate? Did they appropriately react to his cries for help during the arrest? Was there sufficient evidence of a crime to indict? Was the high media affair handled correctly by the City and  prosecutor? Was there a crime involved?

It is a secret proceedings. The public cannot attend. The person against whom the evidence is presented likely doesn't even know that the hearing is taking place involving them.  Although, in this case the prosecutor took the unusual step of inviting the police office involved to give extensive testimony in his defense.

Now consider that the police and prosecutor's office always are working together. One investigates crime and reports it to the prosecutor who prosecutes the crime. They have a close working arrangement. Would you want the umpire in a baseball game who worked closely with the players  on the  other team?  Add to that this involved possible accusations against police officers making an arrest and in the secret  proceedings the prosecutor controls the show. There is no one monitoring the fairness and the person presenting the evidence has a relationship with the person "on trial." That raises justifiable doubts about the fairness of the outcome especially among African-American people who start our seeing themselves singled out by the police.

As to the arrest, a very important fact is that the entire arrest was video taped. It's not often one can watch the alleged crime happening and hear what is said in deciding guilt or innocence. People who watch the video tape feel they don't need a grand jury to advise them. They can see and hear for themselves what happened from first confrontation to the death of this man.

I understand that New York law defines first-degree manslaughter as acting with intent to cause serious physical injury resulting in death and that 2nd degree  manslaughter is when a person recklessly causes death. A person acts "recklessly" when he or she is "aware of and consciously disregards a substantial and unjustifiable risk that such result will occur or that such circumstances exist." The risk that the person creates must be of such nature or magnitude that his or her disregard of it constitutes a "gross deviation from the standard of conduct that a reasonable person would observe in the situation."

The likely cause of death wasn't primarily due to the grip around the man's neck but rather from the other police officers forcing him to the sidewalk resulting  in what is known as positional asphyxia – the bending of the body cutting  off the air to the lungs. I don't think for one second any of the police  involved in this arrest wanted to kill this man. Intent to  harm just isn't a consideration for me in evaluating this. The question for me is acting recklessly with a substantial risk of death. Or, more accurately, is it OK for the police to exert this amount of force by five officers to unintentionally cause death while the suspect is repeatedly telling  them he couldn't breathe, but without any reaction by the police?

The video shows several please officers forcing the man to the sidewalk in an attempt to handcuff him while the primary cop in the controversy is applying a neck hold. The significant words spoken by Eric Gardner, the black man, consists of eleven times telling the officers "I can't breathe." None of the officers react to his protests and the policeman with the hold around the neck never releases or changes his grip around the neck. There  is no dispute about the fact this method of arrest caused his  death.

Those who approve the grand jury outcome say that the hold around the neck was not the choke hold the police department prohibits. But, the total "take down" by these police was cause.  The police officer applying the hold insists he did not intend to cause death. But, intention isn't required for 2nd degree manslaughter. Others point out that if this man had submitted to the arrest he would be alive. But, you could just as easily argue that any wrong  by another could have been prevented if  the harmed  person hadn't have gotten up that day. And, the refusal to obey a policeman does  not give  them the right to kill you without substantial justification.

For me, the first troubling aspect is the multiple officers and the force used to make an arrest for a minor offense. Let's not forget this is not an escaping bank  robber, someone on the ten most wanted list or even someone with a weapon. This is an unarmed man accused of not having a city license to sell cigarettes. Hardly the crime of the century in New York. It has all the characteristics of a serious over reaction causing an unnecessary death. He was not violent and didn't threaten to hurt anyone. . He didn't attack the officer physically. What he did do was argue about the need to handcuff which led to the police showing who was in control – all five of them.

I am really troubled by anyone crying out "I can't breathe" over and over with absolutely  no reaction of any kind by the five cops. I don't care whether it was the prohibited choke hold or not. I do care that not one of the police says they should check and not one of them, especially the cop with the  neck hold, does anything to change the take  down. They do nothing.  They clearly are determined to show him he can't refuse to be handcuffed  and get  away with it without checking  to see if he can't breathe. With all those cops there he wasn't going anywhere. It doesn't take a medical degree to know if he couldn't breathe it could kill him – which it did. Isn't it reckless to ignore his cries  for help?  Wouldn't a reasonable person have reacted in some way? Can  this be excused by simply  saying "I didn't intend to kill him"? Doesn't the seriousness of the offense and the extent of force used while ignoring cries  of not breathing have significance whether a policeman or not?

Given all of this, the secret grand jury proceedings run by the prosecutor in complete control of  the proceedings does not satisfy the idea of a fair evaluation of whether a crime occurred or not. A secret hearing resulting in a decision there was nothing criminally wrong with causing the death of man under these circumstances causes more controversy than it resolves.

Yes, a civil damage suit can be filed, but what are the odds of a fair trial given high level media attention and the race issue? Besides, the case  would  be defended by the City and any verdict paid by the City and not the police involved. Even assuming a civil verdict that lacks the justice of an appropriate investigation of a crime in this case. It seems to me  to end up in a very unsatisfactory manner because of the way the issue was processed in New York.