These are the words of Dale Cox, a prosecutor and Caddo Parish Louisiana. As to the death penalty he insists "we need it  more now than ever." He has personally been the prosecutor in half of the death sentences in Louisiana since 2010. In a case where he convicted a father of wrongfully killing his child he told the jury that when it comes to a person who harms a child, "Jesus demands his disciples kill the abuser by placing a millstone around his neck and throwing them into the sea." 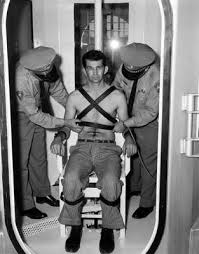 Cox is referring to Matthew 18:6 (King James Bible) "but who so shall offend one of these little ones which believe in me, it would better for him that a millstone were hanged about his neck, and that he were drowned in the depth of the sea." Or Mark 9:4 to (New International Version) "If anyone causes one of these little ones – those who believe in me – to stumble, it would be better for them if a large millstone were hung around their neck and they were thrown into the sea." Like much of Scripture which uses parables and metaphors this is hardly a clear cut expression of Jesus demanding death for child abusers. Millstone drownings were a form of  execution at that time and a more logical interpretation is that Jesus was saying it would be better for such a person to suffer the event than have practiced teaching a child to sin rather than saying He approved of execution. Didn't Jesus also say of Judas "But woe to that man who betrays the Son of Man! It would be better for him if he had not been born." (Mark 14:21) He is illustrating the seriousness of the sin & not proclaiming approval of a punishment.

Only 5% of Americans believe Jesus endorses executing criminals. This includes 2% of Catholics, 8% of Protestants and 10% of all practicing Christians. Christian leaders, including the US conference of Catholic Bishops have also been some of the most outspoken opponents of capital punishment. But overall, a majority of Americans back the death penalty.

On the other hand, Christians who oppose capital punishment cite Biblical arguments including these:

What it comes down to is that one can use a microscope to find passages of the Bible to support in some fashion  your position on capital punishment, but the real issue is it fundamentally consistent  with the life and  teaching of Jesus? Is it appropriate  for a civilized country like America? Does  it work, i.e. is there provable benefit which justifies doing it?

The USA is the only country in the Americas to have carried out executions in 2013, with 41% taking place in Texas alone. According to Amnesty International, 140 countries have abolished the death penalty. China executed more people than the rest of the world put together. Of the 638 confirmed executions in the region, three countries- Iran, Iraq and Saudi Arabia- accounted for 95% of them.

Whatever your view, mine is that we should abolish capital punishment in this country. We  need to re-evaluate our  entire criminal justice  system including our "drug war" philosophy and our treatment  of the mentally ill in the criminal system.

I do know that I am appalled by a lawyer empowered to protect the public as a prosecutor who advocates the goal that "we should  kill more people."