Last night I watched a portion of the fiasco falsely advertised as a “Republican Debate.” By anyone’s standards, it was anything but a debate. In fact it could only be described as an unruly group of schoolchildren in rebellion while their incompetent teacher struggles unsuccessful to regain control. It’s difficult to decide whether the spectacle was more an illustration of the absence of presidential qualities in the candidates or the ineptitude of those supposedly in charge. As a contest between candidate and moderators,CNBC lost in a rout. 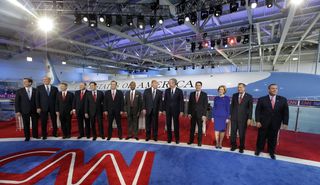 One would expect CNBC, in charge of this fiasco, would not only have firm and fair rules, but would also be prepared to have the means to enforce them. Instead it was a  night  of open revolt over rules or controls.  It became a contest between the candidates and moderators. Rules, if any, were ignored early in the evening and thereafter continuously violated without sanction. The candidates quickly figured out they could ignore the rules, ignore the moderators and ignore the questions. The moderators became irrelevant. What CNBC apparently failed to grasp was the need for ways to enforce established rules. One simple method was to give the moderator a switch to turn off the candidate’s microphone who was violating the rules.  As it was it became a contest between the candidate and moderator to see who had the loudest voice and who would give in first. What a circus!

Worse, this debacle had no resemblance to any attempt at an orderly discussion of substantive issues. Candidates ignored the question and made the speech they had memorized. In addition, they said whatever suited them whether truthful or not. Too often the moderator lacked either to courage or the documentation to hold the candidate’s feet to the fire of truth. On top of that, the moderators questions and even their demeanor was more dramatic and provocative than focused and designed to address substantive issues. There were entirely too many "have you stopped beating your wife yet?" questions.

On stage was this long line of Republican hopefuls all waiting for the chance to come up with a “look at me! Look at me!” opportunity which they did as often as they wanted. None of them acknowledged the real source of their long list of problems in our country. Eight years of George Bush, the insane invasion of Iraq and the gridlock by Republican extremist in Congress were never mentioned. No, it was all President Obama and Hillary Clinton’s fault. And, their plan to save the nation consisted essentially in dismantling the IRS & taxes, eliminating all federal protection regulations and giving business a free reign without controls. Their joint view is that will result in a kind of “trickle down” benefit by business spending, producing more jobs and taxes while eliminating much of government. Never mind that historically this approach has been a total failure because of the greed of big business which is why the regulations were adopted in the first place, but that’s a subject for another time.

The candidates all insisted individually that they had a “program” that would solve employment problems, tax issues and save the middle class if only they were elected. No one explained how as individual president they would be able to get any program through the obstructionist House of Representatives and the isolationists section of their party, the Tea Party.

In summary, this was a substantial waste of  time for anyone whose goal it was to provide all the candidates an equal and fair opportunity to  present their views on substantive issues.  And that was the fault both candidates and moderators.