Our loving, sweet, little dog, Josephine, unexpectedly died last night. After thirteen years of being entertained and greatly loved by her it was a gut wrenching experience for Lita and I. It was especially hard and painful for our friend Julie Albers and her husband Randy. Josephine died in Julie's arms with Randy trying to do CPR to save her, but it wasn't to be. Lita and I were in Seattle for the night and Julie and Randy were taking care of her when she became ill. Calls to the vet and everything that could be done, was done, but death came quickly. It is likely that the cause was a blood clot following a tooth procedure she had earlier that day under anesthetic. 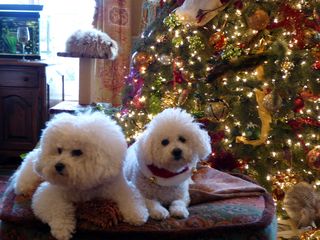 Josephine may have looked like a pretty white Bichon Frise, but to those who knew and loved her she looked to us like a beautiful little girl with pink pig tails who could explain whatever she had to say in her own mixture of sounds, noises and body language including a  little dance. If you didn't understand her that was your problem because she was convinced she had made herself very clear, especially when she wanted a treat.

She originally was one of two Bichon's who came to be part of our family. The other one was Napoleon who was the older of the two. She joined Napoleon and two wonderful Persian cats, Bogie and Bacall, so we had Napoleon and Josephine plus Bogie and Bacall. She came to us as a puppy and immediately decided that Napoleon was at a minimum her protector and maybe her mother. She followed him everywhere and did everything he did. They were inseparable and when he died October 4, 2008 she was absolutely lost. She searched the house for him carefully looking. She even spent time upstairs looking out the window towards the driveway waiting for him to come home. It took months before she seemed resigned to being alone.

Sometime later we got Valentino, a wonderful little male Bichon to be her companion. At the same time Julie got a sister to the same dog, Isabella. The three became close. Josie, being older, wasn't as active, but the three sent a lot of time together.

[Valentino & Josephine on the right]

Josie loved food. About 4 pm she would come and find you complaining that she was hungry and wanted to eat her dinner. She especially liked treats that weren't always all that healthy for her. In particular, she decided that the best treat in the whole world were Pepperidge Farm Chessman cookies. They were small cookies that came in small individual packages. I had bought a box at the store and shared with her once while Lita and I had coffee upstairs.  Soon, it was a habit. She would wake up early and get me up to go down to the yard and afterwards would want to hurry back upstairs to the bedroom where cookies were waiting. While having coffee with Lita we would share out of one of the small packages of cookies with Valentino and Josie, both carefully watching to make sure they got an equal amount. It became such a ritual that when stores stopped carrying the cookies in the little packages I had to buy them on Amazon by the carton and to suffer my wife's ridicule about how the dog ran my life. Josie also liked Green Bones and treats in general. She knew they were kept in the kitchen closet and often tried to lead me there dancing and talking all the way. if we were gone 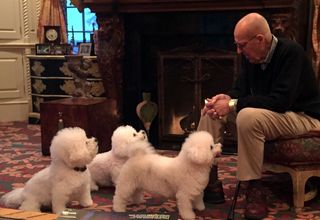 and came home, Josie would be waiting by the door not only to see us, but because she was hoping for a treat. 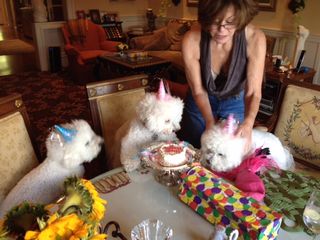 When she got tired at night she wanted to go to bed and would complain to us about staying up late. As she got older it was more difficult for her to jump or climb. We had small steps by the end of our bed she would use to get up on the bed. She would go up the stairs and wait until we came to the bed. Then she would roll over because she wanted her pink tummy rubbed. Afterwards she would climb down and go to her kennel where she spent the night. Valentino would wait on bed for us to pet him and then climb down for the night. They both spent the nights with us unless they were staying with Julie, Randy and their Isabella.

As Josie aged she need vet care. She had a successful cancer surgery and was treated for a lot of other problems. She had an eye problem that required a medicine three times a day and needed other medicine for her various problems.  Lita and Julie were faithful about giving her the medicine and taking care of her.  She was such a good patient. She endured it all with patience and love. But then she was a loving sweet animal. Not a mean bone her body. She loved everyone and we all loved her. Losing her has been as painful as losing a family member, perhaps because she had become a member of our family. I won't be able to have coffee in the morning with Lita without thinking about her.

The Rainbow Bridge is how I prefer to think about Josephine and all the other loving animals we have had and who have died:

When a beloved pet dies, the pet goes to this place. There is always food and water and warm spring weather. All the animals who have been ill and old are restored to health and vigor; those who were hurt or maimed are made whole and strong again, just as we remember them in our dreams of days and times gone by.

The animals are happy and content, except for one small thing; they each miss someone very special to them, who had to be left behind. They all run and play together, but the day comes when one suddenly stops and looks into the distance. Her bright eyes are intent; her eager body begins to quiver. Suddenly she begins to run from the group, flying over the green grass, her legs carrying her faster and faster. You have been spotted, and when you and your special friend finally meet, you cling together in joyous reunion. The happy kisses rain upon your face; your hands again caress the beloved head, and you look once more into the trusting eyes of your pet, so long gone from your life but never absent from your heart.

Then you cross the Rainbow Bridge together, never again to be separated.