In the TV series Newsroom Jeff Daniels stars as Will McAvoy, a veteran news anchor. It's brilliant writing is by Aaron Sorkin, his first  television show in six years. In one scene, McAvoy is  part of a panel at a college and  "snaps" when a young woman student asks the panel what makes the United States "the greatest country in the world?" and unloads his contrary view to the college audience. Here's an excerpt of  what he tells them: 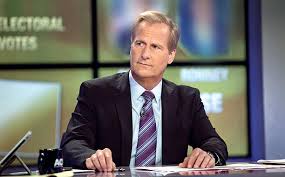 "Hey– – And with a straight face you're gonna tell students that America is so star-spangled awesome that we're the only ones in the world who have freedom? Canada has freedom. Japan has freedom. The U.K., France, Italy, Germany, Spain, Australia. Belgium has freedom! like 180 of them have freedom.

All right– – And, yeah, you, sorority girl. Just in case you accidentally wander into a voting booth one day, there are some things you should know, and one of them is there is absolutely no evidence to support the statement that we're the greatest country in the world.

We're seventh in literacy, 22nd in science, third in median household income, number four in labor force, and number four in exports. We lead the world in only three categories: Number of incarcerated citizens per capita, number of adults who believe angels are real, and defense spending where we spend more than the next Now, none of this is the fault of a 20-year-old college student, but you nonetheless are without a doubt a member of the worst period generation period ever period.

So when you ask what makes us the greatest country in the world, I don't know what the fuck you're talking about. We used to be. We stood up for what was right. We fought for moral reasons. We passed laws, struck down laws for moral reasons. We waged wars on poverty, not poor people. We sacrificed. We cared about our neighbors. We put our money where our mouths were and we never beat our chest. We built great big things, made ungodly technological advances, explored the universe, cured diseases, and we cultivated the world's greatest artists and the world's greatest economy. We reached for the stars, acted like men. We aspired to intelligence. We didn't belittle it. It didn't make us feel inferior. We didn't identify ourselves by who we voted for in the last election and we didn't– we didn't scare so easy. , we were able to be all these things and do all these things because we were informed."

There  was a lot of reaction after this show was broadcast. Some were outraged and others agreed. What is significant to me is that in my lifetime there have been profound changes in our political system and not for the good. Whatever the state  of our country it can be improved. This country was, maybe is and, at least, can be the best in the world.  We owe that to our children.

In my view, our problems all deal with the undermining  of the constitutional balance of powers that was intended to control the abuse of power by one group or one part of government over the other. Primarily starting at the time of Ronald Regan there has been a continuous removal of government controls, regulations and restrictions intended to control abuse in our environment, economics, legislative, executive and judicial functions. The flood gates of big money influence began with Citizens United U.S. Supreme court case. When Justice Scalia and Thomas refused to step aside given their involvement with the Koch brothers and their money, the court ruled in favor of big money. Had they stepped aside as they ethically should have, the vote would have gone the other way.  After that dark money  could secretly directly influence our legislatures and our executives as well as defeat or elect judges of  their choosing.  When  unlimited and secret millions determine our judicial elections and when Wall  Street, huge corporations and big business are no longer regulated the result is corruption, abuse of  power with a breakdown of  function of government. The purpose of constitutional balances of  power on the legislature, executive and judiciary was specifically to prevent this from happening. Once the limitations on millions and even billions of political dollars were removed, the balance begin was tilted to the right and no longer functioned as intended. Power corrupts and absolute  power absolutely corrupts. The political problems and governmental function failures are directly connected to millions and  millions of dollars influencing decisions over doing what is right for the country  as a whole.

Until the  American people become fully involved in the reality of the increasing influence of the rich and the powerful we will continue to spiral downward as a country. it is only through the ballot box we can restore our country and it's democratic function to what was originally created by our founders through our constitution. Until we have a congress that functions as it was constitutionally created, a court system that is  truly independent and fair and politicians who are not beholding to  rich contributors we will not be the greatest country in the world.