In the May 1st edition of the International New York Times I read an article by Sarah Wildman about Justus Rosenberg, age 95, who still teaches literature at Bard College. He is thought to be the last remaining member of a special World War II team assembled by a journalist, Varian Fry, in 1940. It was organized to provide safe passage out of Vichy France for intellectuals and important cultural figures fleeing the Nazis. Fry had been sent by a group of New York intellectuals to help rescue them from Nazi imprisonment or death. He had arrived in Europe with $3000, a passport and a list of 200 names to try to rescue.In fact, the team he created was highly successful in rescuing some 2000 men and women who would have been imprisoned or put death by the Nazis as Jews or intellectuals.

Rosenberg’s connection was a series of circumstances. Born in Poland in 1921 Rosenberg had a younger sister and parents who were successful in the import and 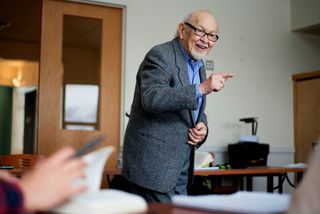 export business. After the Nazis rose to power and anti-Semitism grew his parents, in 1937, suggested that he leave and continue studying in England or France. He chose Paris. He was boarding at a prestigious French school his parents were paying for and quickly became fluent in French. He says that fact and the fact that he looked very young saved his life because he adopted a non Jewish identity. When the Nazis invaded Poland in 1939 he lost contact with his family and became penniless. To survive he took odd jobs and slept where he could. He left Paris just days before the Nazis arrived. The roads were clogged with families with all their worldly possessions in wheelbarrows and other means of transport. People slept on benches and hotels were overcrowded. His next fortunate break was that at a place he found to spend the night he was assigned a spot on the floor next to an American student Miriam Davenport who took a liking to him. She suggested they go to Marseille where she had connections to two young Americans who were working with Fry. He left with her.

Rosenberg became involved with Fry’s work when he was 19 years old. As a blonde blue-eyed youngster speaking flawless French he was able to fly under the radar even though he himself was a Jew. He was entrusted with scouting safe border crossings, delivering documents, often doctored, and running errands which range from the ordinary to the dangerous.After months of successful but dangerous work eventually Fry’s team was disbanded and Fry left Europe.
From this point Rosenberg’s life, took a series of turns with his serving with the French resistance and then assisting the United States Army and finally ending up in America.

When Fry’s team broke up Rosenberg needed to get out himself. He tried crossing the border to Spain but was arrested and jailed. After being released he was rounded up with several hundred other Jews who were going to be sent to a labor camp in Poland. However, someone with medical training suggested he fake a stomach problem to be sent to the infirmary instead. He pretended to have the symptoms the friend recommended. He was sent to the camp infirmary where he was able to find a way to heat a thermometer until it registered a dangerous fever. As result the doctors operated to remove his appendix. His plan was to escape from the infirmary but he had no clothes which had been taken away and was recovering from surgery. A sympathetic priest had arranged for a parcel of clothing to be hidden in the hospital toilet area with a bicycle below the window. Still recovering from the surgery, he climbed out the window and rode the bicycle to a safe house where he was able to get false papers and a new identity.

From there he managed to find and join the resistance until the summer of 1944 when he encountered the United States Army soldiers. He joined them in communicating with local people. As another fortunate turn of events, he recalled that one day the men he worked with were in a Jeep and decided to play a joke on him by driving away while he was standing talking to a farmer. He had to chase the Jeep and jump into the back because his regular seat in the front passenger seat was occupied. It then hit a landmine killing the man in what was his regular passenger seat and seriously injuring the driver but he escaped with only cuts and bruises.

After the war he returned to the Sorbonne. His parents and sister had survived but were interned on an island for several years. He would not see them again until 1952. In Paris he applied for a visa to the United States and in 1959 he obtained a teaching position joining the Bard faculty. He says that he tracked down Miriam Davenport and thanked her for her role in his survival after coming to America and she was delighted to talk to him after all the years.

He is quoted when interviewed as saying that: “I think of my life is what the French call a confluence of circumstances.” I would call it blessed and a truly amazing adventure.