From Russia we were on our way to Morocco. We left the four seasons Hotel in St. Petersburg at in the morning for our plane. On the way however, we stopped at Peter & Paul Fortress and we visited the Church of the Savior on Spilled Blood. The name is due to the assassination that occurred there. The Peter and Paul Fortress is St. Petersburg’s oldest structure and the cathedral is the burial place of all Russian emperors. This is the only church in the world completely covered by mosaics both inside and out. It is a truly spectacular work of art because the tiles creating the Mosaic represent stories from the New Testament and illustrate such things as miracles of Jesus. This stop was of itself worth making a trip to St. Petersburg to see. From there we continued on to the airport where our plane was waiting. It was a six hour flight from St. Petersburg to Morocco and the Marrakesh which was our destination. What isn’t reflected in the schedule for our trip is the significance of time changes. This often results in very long days with activities scheduled after our arrival based upon local time.
When we arrived at the airport I was startled to exit the plane in a hail storm with large pieces of ice and cold temperatures. . I had anticipated a desert climate. The weather did improve later but was changeable throughout our stay. At the four seasons hotel we were again greeted by people in costume singing and dancing for us. We checked into our room and, once again did not completely unpack but instead searched through our baggage to find what we would need for this particular stop. 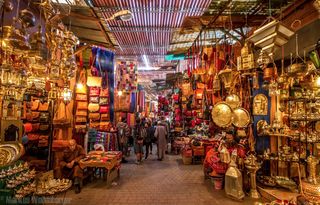 That night we ate the Italian restaurant in the hotel which did not feel normal given the fact we were in Morocco. The food however was good. That night there wasn activity scheduled for people who wish to attend involving a visit to the large square. Those that went were conveyed by horse driven carriages to the square where they could see all of the activities involving musicians, snake charmers, acrobats and magicians. The weather however had turned hold and overcast and we elected to make our own arrangements the following day instead. The next day after breakfast we accompanied our guide and a driver. The guide was very experienced in his job and made the visit to the square enjoyable as well as not becoming a burden for me. Lita had in mind specific things she was looking for and after stopping for a picture with the snake charmers we proceeded to the area with narrow paths between one shops after another.

Every kind of food and article were being sold in one small stall next to another along a very long winding alley full of people buying, selling and looking. When she stopped at the the place selected by the guide for what Lita was looking for, I continued walking along the narrow alley to an area that opened up into a smaller square surrounded by other stalls. The parade of local people in various kinds of dress was fascinating. An older man pushing a large cart full of yellow bananas went by followed by a man on a bicycle loaded with bundles that should have crushed the wheels. Everywhere around the square and in the square there was a continuous activity of selling talking and passing through. There was a small turtle walking along and other things being sold… I was able to get some good photographs.

As to photographing people, when we arrived we were given a small sack with coins in it to be given to people who were willing to have their photograph taken, you needed to ask first. I preferred to use my zoom lens for spontaneous photos. After that I walked back to Lita who had completed a purchase and had other places she wanted to go with the guide. At the place where she had just made a purchase there were men sitting on small stools right at the entrance, smoking and talking Arabic against the wall of the alley walkway.The guide commandeered one of these small stools for me and I sat with my cane watching the parade of continuous people going in both directions.

In addition to all of the people dressed in a huge variety of fashions, there were people on small motorbikes, bicycles, and even a small vehicle that somehow wove its way through. I sat there for well over an hour or more and never got tired of looking. There were small stalls selling a variety of things that were also intriguing. This included piles of olives, spices, colorful tassels and clothing of every kind. It was a bizarre of senses. After that we visited the place where past royalty was buried. The burial area was covered with colorful mosaics and the walls decorative. After that we went back to the hotel and ate lunch.
That night there was a farewell dinner which was held outside in a large garden after a roof top cocktail party. We went to the cocktail party held at the roof before the dinner took place. It was cold enough there was a fire and it was overcast. We went down with the rest of the group to the outside dinner. Moroccan food, belly dancers and entertainment were going to be featured during dinner. We sat at a table long enough to decide that it was too cold and windy to be eating outside. Instead we went upstairs and did some packing and went to bed.

The next morning we were up early for our nine hour flight to Boston. I thought of the limerick: “Here’s to good old Boston, the land of the bean and the cod. Where the Cabots speak only to the Lodges and the Lodges speak only to God.” We arrived midday Boston time and after our baggage was delivered we went to the farewell buffet party. There were raw oysters, Boston clam chowder, food and drink of every kind. By this time people had gotten to know each other and were having a good time on our last night. We we enjoyed the food, talk to people we had met said our goodbyes and went to bed.

The next day we were up early for our trip to the airport and the five at half hour flight home. It was a small Boeing 737 where the first class is tight enough that the only difference between first-class and coach is the seats are a little wider and they give you airline snacks. It was full.
We arrived in Seattle a little after noon to a glorious 84° day. We had federal expressed from Morocco the two large suitcases and had reduced our load to just two smaller cases plus our carry-on. As a result we got our luggage quickly and we got in our car with Anna who has been our driver for a very long time whenever we need one.

When we arrived in Gig Harbor and had unloaded the luggage, kissed our dog and held our cat I stood on the porch and looked out at the beautiful saltwater and Vashon Island with Mount Rainier on a glorious sunny day. We had flown over 25,000 miles and had spent over 48 total hours in the Boeing jet. We had flown from Seattle to Japan, China, the Maldives, Africa, Italy, Russia, Morocco, Boston and back to Seattle. We had been on several continents. We had experienced a large variety of cultures and experiences. It was an extraordinary adventure. But as I stood there looking out at the beauty of our Northwest, I thought of Dorothy in the Wizard of Oz who tapped her red ruby shoes together and said to herself: “there’s no place like home!” I agree.