The Statue of Liberty was a gift to the United States from the people of France. It was dedicated in October 1886 and was quickly seen as a symbol for welcoming to the United States to immigrants from other lands. The statue shows a female figure representing a Roman goddess of liberty and holding a tablet of law on which is inscribed the date of the American Declaration of Independence. Since then it has been a welcoming sight to immigrants arriving from abroad located as it is on Liberty Island in New York. An American poet Emma Lazarus wrote these words that appear on a bronze plaque at the statue which reads in part:

“Give me you’re tired, you’re poor, your huddled masses yearning to breathe free, and the wretched refuge of your teeming shore. Send these, the homeless, tempest tossed to me. I lift my lamp beside the golden door!”

The political hysteria over immigration today lies somewhere between these two positions on American's proper policy on immigration. To start with, what are the facts about immigration to America? There is no question a lot of people agree with candidate Trump. The Pew Research Center has found that the vast majority of GOP 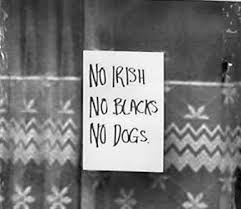 voters believe that the growing number of newcomers to the United States “threatens traditional American customs and values.” In addition public opinion data generally shows Americans oppose large numbers of refugees entering the country. About half of the Republicans say that immigrants to the United States make society worse in the long run compared with just 24% of the Democrats.

What are the facts? Academic economics find there is little evidence of any significant effect of immigrants on the personal economic situation of Americans. There is a broad agreement among academic economist that in the long run immigration has a small economic impact on American workers generally.

The reality is that there have been objections by some segments of society to immigration legal or illegal throughout history largely based on fears of bringing  crime and undermining American values. For example, the largest flow of German immigrants to America occurred between 1820 and World War I. They were met with the objection by Americans that the immigrants were threatening to destroy American values and democracy. They were accused of criminal activity. Politicians were called upon to restrict the rights of aliens and people claimed they were taking away jobs.

From 1845 to 1852 there was a great famine in Ireland with mass starvation due to the failure of the potato crops. That resulted in immigration by the Irish to the United States. Their immigration in the first half of the 19th century was met with strong bias against them by Americans who accused them of drunkenness and criminal activity. They were accused of taking away jobs from Americans and in many places it was common to see signs “No Irish need apply.”

Between 1880 and 1924 more than 4 million Italians immigrated to the United States with the majority fleeing poverty in Italy. Like the Irish they were targeted by lynching mobs in some places because they were seen as involved in crime and, like the Irish, they were hated for being Catholic. In addition they were seen as bringing crime, taking away jobs from Americans and undermining American values and traditions. Discrimination was widespread. For example, one of the most famous criminal cases involved two Italian anarchists Sacco and Vanzetti who were convicted and executed in a trial most historians agree involved a judge, jury and legal system that was extremely biased against Italian immigrants.

In November of 1919 we had the infamous “Palmer raids.” These were repeated rounds of law enforcement people arresting immigrants and others under the supervision of the United States Department of Justice. Their objective was to capture, arrest and deport people considered to be radical leftists especially anarchists. The raids arrests and deportations began in November 1919 and ended in January 1920 under the supervision of Atty. Gen. Mitchell Palmer.  Many were unlawfully deported without hearings out of fear of communist takeover or the “red scare” of the times. Over 10,000 people, most of whom were immigrants, were arrested, held without hearing and then many were simply put on ships heading to other countries without any hearing or legal process.

So, how should we react to the present widespread hysteria against immigrants both legal and illegal in this country? Do we support candidate Trump’s plan of building a wall to keep out Mexicans, rounding up 11.7 immigrants for deportation, barring Muslim immigrants and imposing strict immigration standards for all others?  The three important issues include: (1)  national security (2)  economic prosperity  and (3) cultural integrity. Certainly the government has a right and responsibility to protect the security of citizens by taking reasonable means against threats from our borders. We also have a right to economic prosperity. When threatened by immigration it is appropriate to reserve a greater share of resources for existing citizens over immigrants. It is also a reasonable concern to maintain the cultural integrity of an existing society against changes  resulting from emigration.

On the other hand, there is an issue regarding compassion and concern for all peoples. We might keep in mind the Bible Exodus 22: "do not mistreat an alien or oppress him, for you were aliens in Egypt." Exodus 23 says "do not oppress an alien; you yourselves know how it feels to be aliens, because you were aliens in Egypt." Whatever our position on immigration policy and enforcement, Christians should be at the forefront of ministering to people far from home and to "do unto others as you would have them do unto you."

From a practical standpoint we need to revise our visa program because as many as half of the people here illegally did not sneak over the border. Instead they came here with a visa legally and simply didn't leave when it expired but the United States doesn't have an effective system for dealing with that problem or enforcing the visa expiration. Under our laws there is no permanent penalty for being caught as an illegal immigrant. If you try to cross the border and get caught we send you back and you are free to try again. Our law should be that anyone who is caught coming into the country illegally is permanently barred from ever having legal status. These and other changes should be made in our immigration laws and enforcement policies,

However, House Republicans have consistently barred any attempts to pass comprehensive immigration legislation and have challenged in court Pres. Obama's executive orders that would have prevented mass deportation of illegal immigrants. This nation has always drawn much of its strength from having people from other countries immigrate and add to the energy and prosperity of the country. The United States has for the most part received the benefit of talented and committed citizens who have raised our standard of living. Our national policy should continue to encourage immigration. What we need is a comprehensive immigration policy that deals with the reality of our situation. To accomplish that the House Republican obstructionists who selfishly refuse to help America's dilemma for purely political reasons need to be voted out of office and replaced by rational people with a goal of doing the right thing for America and not just their re-election.

As to our outdated immigration laws, Congress, and in particular the Republican members of the house, need to address the basic issues. Certainly the borders need to be made secure in the sense of how we admit and who we admit to this country and the manner in which we deal with those who enter illegally. We need some sort of a worker program allowing people to come here temporarily to do work which is not being done nor is desired by Americans. We need to  revise and improve our immigration laws relating to visas and people temporarily admitted to this country. We also need a program which attracts the best and the brightest around the world and screens those who seek admission. In summary, the issue of immigration should not be a political football, but treated as an issue calling for a reasonable solution. But, in an  American manner and not one of  stereotyping or prejudice for political gain.