This Saturday September 17th we leave from Seattle on British Air to London and,after a short layover, continue to Barcelona, Spain where we spend the night. The next day we board a Seabourn ship, the Sojourn, for a ten day cruise. From Barcelona we sail to Valencia and continue on to Ciutadella de Menorca, Spain. We then go on to San Remo, Italy and then la jolicette France. We stop at San Tropez in France and Sanary sur Mer in France. From there to Santa Margherita in Italy. We stop in Portoferraio Italy and end the trip near Rome. After leaving the ship we are driven to the Hotel Santa Caterina in Amalfi for a few days and then we go to the Hotel Villa Clementina outside of Rome for the night. The next day we fly from Rome to London and back to Seattle arriving on October 3rd. 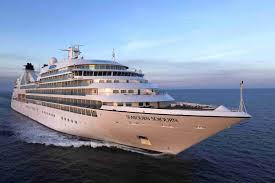 The Seabourn calls this cruise the Spanish Grandeur and Riviera cruise. We have booked an owner's suite in the bow of the ship which we have stayed in before and which offers a lot of room plus balcony. The ship was built in Genoa in 2010.The ship has 11 passenger decks and 225 state rooms. There are two outdoor swimming pools, four restaurants and nightly entertainment as well as all the other things you expect on a quality luxury liner.

Barcelona is the capital of Spain's Catalonia region known for its art and architecture. This is where the architectural landmarks designed by Gaudi are found including the famous church Sagrada Familia. The art museums are world class containing paintings such as Spain's great Picasso. it's a city of 1.6 million people in the central area of the city and millions more in the surrounding area.  There is a huge public market in the city, shopping, restaurants and an excellent place to experience eating Tapas.

Valencia has about 800,000 people and is located on Spain's mid eastern Mediterranean coast.it is the third largest city in Spain and was a former Roman colony. it's known as the city of arts and sciences with futuristic structures including a planetarium and an interactive museum along with beautiful beaches. It is a favorite for vacationers.

Our next stop in Ciutadella is a town on the western end of Minorca, one of the islands off the coast of Spain. there is a picturesque port and an old quarter with a historical significance.

San Remo, Italy is located on the Mediterranean coast of Italy with a population of about 15,000 and is a tourist destination on the Italian Riviera. Sometimes known as Italy's Monte Carlo this Mediterranean resort has a casino, luxury villas and Riviera style grandeur. It's known as the "city of flowers" for its colorful summer blooms. There is an annual music festival held here and a old town.

La Joliette (Marseille) France, is the second largest city in France after Paris. It is also a very old city. Cave paintings found nearby are estimated to be 30,000 years old and remains of brick buildings date from 6000 BC. Located on a beautiful harbor the city has fabulous restaurants and is only a three-hour high-speed train ride from Paris.

St. Tropez is a famous coastal town on the French Riviera. The town attracted the international "jet set" in the 1960s and remains known for its beaches and its nightlife. Located 62 miles west of Nice it is a tourist center on a beautiful coast.

Sanary sur Mer in France has a beautiful coastline with small beaches and is probably one of the  most sunny places in France with an average of only 61 days of rain in winter. Every morning there is a market with fresh produce and wonderful eating. The population is only 17,000 people. A quaint town popular with tourists.

Santa Margherita, Italy is about 22 miles southeast of Genoa and close to Portofino. it is an elegant seaside resort and a town of about 10,000 people. Many luxury yachts will be found in its harbor where international regattas are held during the year.

Portoferraio Italy is a small place with a population of about 8300 people. it is a town located on Elba Island connected to the mainland by a ferry. this is where Napoleon was exiled in 1814 after his defeats in Europe. There are many attractions in and around the town including historical ones.

That's our trip and I'm looking forward to relaxing without the need of rushing  ashore. We have been a number of cruises over the years and many on Seabourn so we know what to expect and it will be a good change of pace for us. The good news is that with our security cameras, alarm system and people at the house every day we can avoid worry about our property while gone.