On Sunday, we are flying to Mexico, to stay at the beautiful Las Ventanas al Paraiso, a Rosewood resort in Los Cabos. It is located on the ocean between Cabo San Lucas and San Jose del Cabo. The flight from Seattle takes four hours and it is a twenty five minute drive to the hotel. This is a five star hotel we have stayed at more than several times and have always enjoyed a very relaxing and pleasant experience. There are other outstanding hotels in this area we have stayed at as well including Esperanza and the One and Only Palmilla, but this is my favorite. With gourmet food and a outside bar on the beach, the place is spectacular. The service includes a butler assigned to your suite with attentive service. There are only seventy one suites, so it never seems crowded. I plan to do nothing but read and rest. After five days there we fly to Scottsdale to stay our Desert Highlands home for several more days before we head back to Gig harbor.

Given our Mexico trip I thought my subject line: "the wall" made sense as the immigration issue has been concerning to me. There is probably nobody on this planet who is not aware of the fact that President-elect Trump has repeatedly said that he would build a "big beautiful wall" along the Mexican border to keep immigrants out of the United States and that he would make Mexico pay for it. When asked how he might be able to require Mexico to pay for a wall he said "you force them because we give them a fortune. Mexico makes a fortune because of us. A wall is a tiny little peanut compared to that. I would do something very severe unless they contributed or gave us the money to 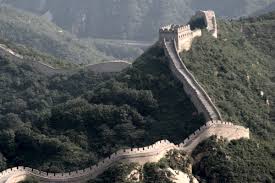 build the wall." He added "I'm very good at building things." Aside from the elephant in the room as to whether a wall of this kind could be built, would have any real benefit or how it would be paid for, there is the more significant question of whether there is a compelling problem involving immigrants and whether the goal of keeping immigrants out as well as  deporting the undocumented is a good idea.

Last night on the news on man was interviewed who said that his father was an immigrant from Eastern Europe and that he too was an immigrant, "but a legal one." He said he had voted for Donald Trump because he wanted to keep out illegal immigrants who committed crime and took away jobs for those already in the United States. I was startled by his passionate response. I would have guessed that a person who had immigrated to this country would be sympathetic to other immigrants wanting to do the same.  I suppose my views are shaped by the fact that my mother and her family immigrated Croatia and my father and his from Italy. Our family is a family of immigrants. We children were always reminded of the gift of immigration given to our families by the United States. Dad was extremely proud of the fact that he had become a naturalized citizen of this country as did my mother's family. Dad believed that this was the greatest country in the world and flew the American flag in front of our home daily. However, the man interviewed on television expressed a view that having made it as an immigrant he now wants to slam and lock the door behind him for everyone else.

The view expressed by those objecting to immigration and undocumented immigrants is that there have been dramatic waves of refugees from various parts of the world and Congress has not passed a comprehensive immigration law since 1965. In addition the racial composition of immigrants has shifted and includes more Orientals and Mexicans both legal and illegal with fewer European immigrants. These concerns have been expressed and while objections to immigration in the past were simply crude bigotry of race and religion, today's objections are mostly economic. The idea being expressed is that we are being swamped by immigrants which increases unemployment and costs us tax dollars plus an increase in crime.

However records indicate less, not more immigration since in 1910 about 14.6% of the population was foreign-born and in 1980 only 6% of the population was foreign-born. As to the claim of lost jobs, the research in the U.S. as a whole as  well as areas of relatively high immigration do not support this claim. In addition, in the agricultural area the facts show a shortage of workers willing to accept the position done by many of the immigrants. As to the immigrants becoming public charges, draining taxpayer money, there is reliable evidence to disprove this claim. Undocumented immigrants receive little in welfare benefits because of their undocumented status.In addition the tax records indicate that the immigrant families pay taxes. The charges made are not borne out by the facts.

In addition to the immigration promises made, resident-elect Trump promised he would deport millions of the nations immigrants as soon as he was elected. So, what is the right attitude from a moral, ethical and right nationalistic standpoint about all of this?  On one hand there are moralist's who argue that there is a duty to obey legal authority and since government is within their power to control  immigration agreeing with these policies is acceptable.  They would argue for tightened border security,deportation of undocumented immigrants and restrictions over the number of immigrants as an appropriate exercise of power of government. They would cite the right to national security, economic prosperity, and cultural integrity as being compatible with Christian-Judeo beliefs and justification for supporting these measures. Others argue that these ideas are not Christian, right or moral. Nor, they argue, are they positions which Americans should take. They would say these proposals are mean spirited, selfish and not in the American spirit of an immigrant nation.

My view is that this country should have a general welcoming one about immigration to this country, but with appropriate control and limitations. Certainly we must put our national interests first and our immigration procedure ought to have effective screening. There should be border controls which are effective as well as protective. While it appears the estimate of 11 million undocumented workers in this country is a very big over estimate, the idea of rounding up thousands of people and deporting them in mass numbers is too reminiscent of Nazi Germany and the Jews for me. In addition, that kind of response  would inflict extreme  emotional harm on families where children are entitled to be here but their parents aren't and other situations where there has been long-term residence. Certainly a reasonable program of identifying the undocumented immigrants and a procedure for controlling  their stay in this country where appropriate is called for.

I have no perfect solution, but I have clear opinions about what is extreme measures involving human beings because of self concern and personal interests. I also know a totally simplistic knee-jerk "build a wall" and "round them up" solution is both cruel and ridiculous especially in the United States of America.

That's my view and you certainly are entitled to your view as well. I only ask that whatever we do as a nation we do consistent with our national history and constitutional obligations.