The morning after the presidential vote was counted, I was walking in downtown Seattle, hurrying to get back to our hotel when I tripped and fell landing on the sidewalk splitting my lip and breaking a tooth. I had planned to blame it on Donald trump's election because I was upset but, the truth is I was not being careful. A very kind young man, Albert, helped me  up and then walked me the remaining several blocks back to the hotel and made sure I was all right. I was upset enough that I didn't get his full name to later thank him, but I'm struck by his kindness and caring about me. There are kind young people in this world.

But, that's not what this post is about. I want to  discuss the election polls.  I have been skeptical about the accuracy of the polls that reflected Hillary Clinton winning the election. Now it has proven to be justified.  Has  this  ever happened  before? Yes,in  1936, the American weekly Literary Digest was a very widely read and respected magazine. The magazine had correctly 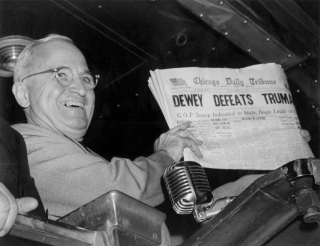 predicted outcomes in four previous presidential elections. That year Al Landon was running against Franklin D. Roosevelt. The magazine spent thousands on a telephone and postcard survey as to who would win the election, The results were overwhelming in favor of Republican Landon winning  by a landslide. Instead, just the opposite happened. Roosevelt won by a landslide losing in only two states. So, after the thousands of dollars spent in this nation wide survey what happened? Well, the names for the survey were taken from telephone directories, club memberships and magazine subscribers. But, what wasn't considered  was  this was during  the depression and these sources were wealthier people who were heavily Republican. There were over nine million unemployed people most of whom who had no phones and many thousands living in rural areas of America who did not even have electricity who were  not surveyed. But they voted and when they did,  it was for the  Democrat. The poll had it dead wrong. Not long after this the magazine went out  of business.

In 1948 incumbent president Harry Truman, Democrat was opposed by New York Governor Thomas  Dewey, Republican and Dixiecrat Strom Thurmond plus Progressive Party candidate Henry Wallace. The Gallup, Roper and Crossley polls predicted a clear Dewey victory  of  between 5 – 15 percentage points. Republican leaders were so sure of victory they played golf on election day and the Chicago Tribune distributed its newspapers  with the headline announcing Dewey won before the results were known.  But, to everyone's shock Truman won by 4.4 percent of the vote. It turns  out that the Roper poll had  stopped doing surveys in September and the other polls stopped several  weeks before the voting. Truman had continued barnstorming and energized voters in the days just before the election most of whom were never surveyed.

In this election, the Los Angeles Times poll predicted a Clinton win by 352 electoral votes. The CNN poll had Clinton up by 5 points nationally. The general polls predicted a 47% favorable vote by Clinton over 42% for Trump. Polls consistently predicted a Clinton victory at figures from 70%  to 95% of the vote. The polls were wrong again and by a big  margin. While it isn't clear what went wrong,  it is clear the polling in many swing states was unreliable. Some have speculated  that people were not all honest about their voting intentions because of social intimidation. More probably it was due to the polling model used to predict who  will vote and using their opinions to project. The traditional likely voter models may have been wrong especially in the  Midwestern and Rust Belt states. These models use sampling from voters they believe are most likely to vote and the total is extrapolated from these sample models. it's likely the models did not correct reflect who the traditional voters were who actually voted  in the election.  Once again, the polls were wrong.

Unrelated to polling, there is the also the widespread misconstruing of the effectiveness  of Trump's message. While the political intellectuals were disdainful of Trump's message, words and delivery, communication experts  recognized the validity of his techniques. Appealing to triggers in the reptilian brain for  self protection and survival, while offering simple, but total solutions to complex issues concerning Americans. Connecting values (same sex marriage, abortion etc.) to the Supreme Court vacancy with the promise to appoint a religious conservative. This is the same kind of communication technique Joseph Goebels used in Germany's propaganda for Hitler's rise to power. I don't mean Trump is a Hitler. I am talking about his skill in using proven communication techniques where primary causes of a nation's problems are blamed with assurances for simple but total solutions if given the chance. It worked in 1933 and it works  in 2016 because human nature hasn't changed. When our personal lives are threatened, whether physically or economically, there is an automatic subconscious primitive brain response. In addition, when our important values are at stake we will always identify with them, even over our personal interests. The results are more complex than just these factors, but they played a significant role in the  results of this  election.

Well, at least the political ads and the political screaming is over or maybe over for  awhile. We will survive and the sun will come up tomorrow.