Jimmy Buffet's 1976 song "Havana Daydreamin" has the lyrics: "My head hurts, my feet stink and I don't love Jesus. It's that kind of mornin' , really it was that kind of night." Well, except for the reference to Jesus, that's how we are feeling this morning. Our return home started in Lucerne at 4:30 am when we were up and getting packed for the drive to the Zurich airport and our flight to London It's a hour's drive. While the airport isn't large there is check in, security and walking plus waiting which take its toll. The plane we flew on was a miserable Airbus where first class means the seats are just as tight as 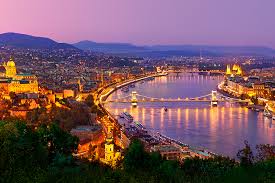 economy, but the middle seat of three is empty. With knees up against the seat in front I can always count on an inconsiderate idiot in front of me pushing the seat back ensuring a painful flight to London which, of course, did happen. We had to go through security again in London and had a long walk to the BA lounge. There was a several hour wait for the flight to leave for Seattle. Coming to London,  British Air was 24 hours delayed leaving Seattle for London and this time they were over two hours late taking off for Seattle. First class is a huge step up over economy and more room than business. But, it's a ten hour flight to Seattle. Then the walk to the customs, collecting baggage and passing through customs to leave bags again. The Global Pass really helps at customs. After customs we pick up bags at the far end of the terminal which is a walk. The ride to Gig Harbor is another hour plus which means a travel "day" of many hours. So, getting up this morning was painful and we are still exhausted.

Our flight from Seattle landed in London and after a layover on to Prague in the Czech Republic. Prague is home to famous culture attractions including the Prague Castle, the Charles Bridge, the old town square with the Prague astronomical Clock and a historic center that is a World Heritage. We stayed at the lovely Four Seasons in Prague for a couple of nights. Prague is a beautiful city and we had a guide who took us on a tour of the city. It is a place where one could spend considerable time touring with unique buildings and beautiful cultural sights as well. The last morning there we joined the other passengers on a comfortable bus ride to Nuremberg, Germany were we boarded the ship. On the way there we made a stop at a small German town Pilzen for a short tour and moved on.  Nuremberg is on the main Danube Canal in Bavaria. There are some 517,000 people and historic sights from World War II. This is where the war crimes trials took place. 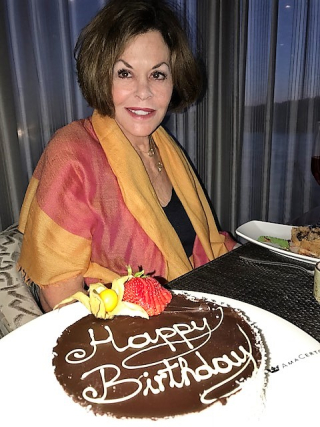 The ship is AMA River Cruise: AmaCerto built in 2012 in the Netherlands. It is 443 feet long and 38 feet wide, built to fit in the river locks. There are 81 staterooms plus three suites and a crew of 51. It has a full restaurant on the 1st level, a large reception area and state rooms on the second and a third level with staterooms plus there is a upper level outside for viewing with a swimming pool. It is a comfortable ship with small cabins and not very comfortable beds. It  also has impossible closet space, at least in our suite. Large box areas to stack clothing and a small closet. The important lesson for this travel is: Do not over pack!" This line features free daily laundry. You deliver it in the morning and you have it back in early afternoon. I could have gotten by with a change of clothes. Plus, at least on this cruise, no one dressed  up. Everyone was in shorts or causal clothes including dinner time. The food was good to average and the service very accommodating. Tours at every top were included in the price and the cruise director very informative.

There are many locks on this waterway and their function is an engineering marvel. Think of this waterway as if the water had to go up over a small mountain and down the other side. To accomplish this locks on one side are designed to lift the ships upwards through a series of systems with circulated water stored in adjacent ponds. After reaching the upper level this system then allows the ship to move downwards using the same technique of multiple locks. Some of these locks are 60 plus feet high. They were really interesting. The Danube is the most important international river in the world  because it flows through ten countries and four capital cities. It is the second longest river in the European Union after the Volga. There  are some 4000 species of animals  and 1000 species of birds. There are some three hundred bridges across the Danube. The first bridges across were built by the Romans and the oldest is the  stone bridge in Regensburg, where we stopped.

Our first stop was  Regensburg, Germany. It is Bavaria and while only 140,000 people it is a UNESCO World Heritage city. At each stop there are organized tours. In some cases the ship stops for the night and others it continues to travel all night along the Danube. Our next stop was in Passau also in Bavaria. At town of 50,000 it has a large university and is also known as "the city of three rivers" because the Danube is joined by two other rivers. We celebrated Lita's birthday on this trip although the cake was delivered a day late and they first sang to me until I corrected them. I don't think this was her best birthday.

Our stop in Linz Austria was about 19 miles  south of the Czech border with historical buildings. From there we went on to Melk Austria where the famous Benedictine monastery, known as Melk Abbey is located. There are only 5,257 people in this town.

From there our next stop was famous Vienna Austria.It is the capital of Austria with a population of 2.6 million within the metropolitan area. It is the cultural, economic and political center of Austria. It borders Czech Republic, Slovakia and Hungary. It is known as the city of music because of  it's musical legacy and numerous musical facilities. It has beautiful and classic architecture,  castles and gardens. It is the home of many historically important people. This very unique place is worthy of a much longer time than we were able to spend here.

Our last stop was in Budapest Hungary. Since we got off the ship here and stayed for several days at the Four Seasons were we spent more time than elsewhere. The beautiful Four Seasons here was built in 1827 and in 1880 The London Gresham Life Assurance Company bought the building which became known as Gresham Palace. The founder was known for "Gresham's law" "bad money drives out good." It suffered damage in World War II and the Red Army used it as a barracks. During the communist control it was used for apartments. In 1999 $85 million was invested in restoring the building and by 2004 it 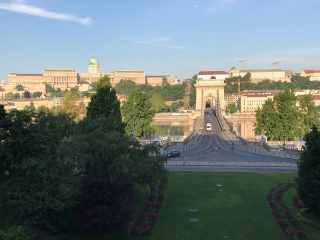 was a Four Seasons Hotel. With ornate figures on the outside, mosaics, stained glass windows and decorative structures inside, it is lovely. It faces the Danube River and the Chain Bridge. The view from our suite's balcony was across the river towards Buda. Budapest is two cities, Buda and Pest. Our stay at this hotel was a memorable one. The manager upgraded us to the $6,000 a night Royal Suite at no additional cost. I suspect our Four Seasons around the world jet tour last year may have been the reason. The room had a large living room, a dining room, kitchen and master suite. The large outside  balcony was directly in line with the famous Chain Bridge and it was an extraordinary suite. Across the river were the huge palace and other historical buildings. At night it was all lit up in a grand fashion. One night there was a long fireworks display at the palace which was wonderful. This was a very unique experience. We walked around. Lita did a lot of walking. There are many tourists here and some were traveling on rented segway's  which they ride on the sidewalk through pedestrians. Many look like they would be a lot more safe walking.

After staying several days we flew from Budapest to Zurich in Switzerland. After having a problem locating our driver, we were driven for an hour to Lucerne where  we stayed at the Palace Hotel. This historic hotel has a beautiful exterior but is very tired  inside. Our suite was rather ordinary with beds that were as bad as the ship, but a beautiful location. There was a regular flow of large lake boats taking people on lake tours. The lake was about 64 degrees but people were swimming and laying in the sun. We visited the stores which featured watches of all kind and jewelry. Buses arrived on a regular basis discharging dozens of tourists most of whom were Korean or Asian. Still, it is a very beautiful town on the lake and a nice place to see.

I've already described our departure and trip home. We are happy to be home and like Dorothy in the 1939 movie The Wizard of Oz, there is no place like home, at least when you live in Gig Harbor.