It is not an exaggeration to point out that the president, his staff, Congressional leaders and appointed agency heads are continually exposed for their lies, political hypocrisy and evasion of truth. Concealment and attempted cover up is regularly exposed. Appointed agency heads are grossly unqualified for their job or just plain incompetent. Worse, they have an open agenda of undermining the purpose for the agency as a regulatory body. Personal financial or political interests are too often the motive for actions and statements. There are  numerous instances of congressional politics held behind closed doors to avoid public scrutiny  The Republican leaders of the Senate and House blocked actions of the Obama administration. Now, in power, they reject all bipartisan cooperation, even when it is in the best interests of the country. In addition, this predicament extends throughout local and state governments as well. Honesty, integrity and duty to the office they hold are the losers in the existing  political environment. The important factor isn't so much whether their political goals are worthy, but their lack of moral and ethical standards to achieve their goals. Is it morally acceptable that the ends 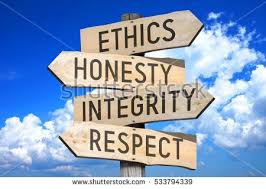 justify the means or are their obligations that go with public service?

There is simply no room for debate about that question. The concept of duty, obligation and accountability expected from public officials has been part of the constitutional framework of this country since it's foundation. Our Constitution begins with the words "we the people." Our political and civic organization in the United States is based on the idea that public officials perform their duties in the public interest. As such elected or appointed officials are accountable to the American people as performing public service. Dishonesty and lack of integrity by these public servants has been traditionally regarded as a betrayal of their duty to the American people they serve. Public figures who use their office for their own profit and advantage undermine our country. As a result of the Watergate scandals in the 1970's Congress passed the Ethics in Government Act of 1978 which, among other things, established the U.S. Office of Government Ethics (OGE). OGE is an independent agency responsible for exercising leadership in the executive branch to prevent conflicts of interest on the part of public officials and to resolve those conflicts of interest that do occur.

If we are to create a democratic culture; if we are to avoid the cynical conclusion that public officials merely use their public offices for their own profit and advantage or that lies, hypocrisy and political self interest are acceptable in America we must have people of integrity serving. If we are to ask people to have faith in Government and to believe that all will be treated fairly, we must have institutions and systems that ensure that public officials are held accountable for what they say and do. To function as a democracy Government must be truthful, operated for the general public interest and be open to public scrutiny.

America's political problems of lack of integrity are directly related to the money required to run for public office. So long as there is no limit on how long political campaigns can continue for office or a limitation on political contributions, we will continue to suffer moral dishonesty in public government. From local elections to the white house, it takes substantial money to run for office. Those who contribute receive, in exchange, influence over the elected. When it takes millions to run for the white house, large corporations, multimillionaires and the wealthy exercise significant influence over those they supported. That is a big reason for concealment and lack of transparency in order not to expose the obligation owed to contributors.

Someone has pointed out that:

"In the United States we have come to rely on this level of transparency as a crucial check and balance on the Government. Public scrutiny brings an added measure of confidence to our system of democratic governance and further reassures the American people that senior public officials uphold the highest standards of integrity. Moreover, public financial disclosure demonstrates the Government's commitment to keeping the citizenry informed and involved in the decision making process of their leaders. It sends a clear message that citizens have a role to play in ensuring the effective and honest functioning of Government. In addition to informing the public, financial disclosure provides ethics officials with a tool to counsel senior officials on possible conflicts of interest. The act of filing public financial disclosure reminds senior officials of the ethical standards they must meet and the high level of transparency and integrity that their position demands."

Today, the very definition of "truth" has become confused with claims of "fake news" as well as misleading statements from Congress and the administration. Truth has been explored for centuries. In the Bible we read of the conversation between the Roman leader Pilate and Jesus, when Pilate asked Jesus "What is truth?" (John 18:33) We know what is not truth:

1. Truth is not what works. Pragmatism says an idea is true if it works. Cheating and lying often work, but that does not make them true.

2. Truth is not whatever you want it to be. Relativism says that truth is whatever I declare it to be. But no one can live this way. If I say a traffic light is green when it is really red, there will be serious consequences. As Daniel Patrick Moynihan said, “You’re entitled to your own opinion but you’re not entitled to your own facts.”

3.    Truth is not always what the majority believe. Majoritarianism says truth is what most people agree to. But the crowd can be wrong. Most Germans believed Hitler was right in the 30s and 40s. But they were clearly wrong. Truth is not based on majority vote. Indeed, truth can easily not be known by the majority.

What is truth then?

1. Truth is universal. Truth is something true for all people, for all places, for all times. Different cultures, different historical eras, different nationalities, do not change what truth is.

3. Truth is objective. It does not reside in us or in our opinions. Personal experience is not the basis of truth. Truth is something that is external to us. We discover truth that already exists. We don’t make it up or create it.

Our country cannot function as an efficient government unless it is administered by people who are truthful and honest. We must restore honesty, integrity and character in those who are elected or appointed to serve us. Bravery is also vital for leaders; they don't shrink when they face a threat or difficulty. It can be lonely at the top – or any level for leaders – and they need the courage to take the lead on unpopular actions. It's been pointed out that we must support as well those who are “morally injured” due to their faithfulness to the demands of their oath. Such injury occurs whenever public servants witness action that violates the oath — and often when they exhibit moral courage in trying to bring such action to light and change it. Unfortunately, the response of agency superiors to the morally courageous has too often been ostracism or retaliation, not support.

The human race always recognizes good character in leaders with honorable conduct. Honor is as important as life. By having honor, moral values are achieved. BY having honor, truth will prevail. By having honor, virtue is realized. Leaders with integrity walk the talk. They are consistent, honest, moral and trustworthy. Their deeds match their words. Leaders without integrity can't be trusted – by their colleagues, their bosses or the public – and inevitably that will lead to problems.

"Let the public service be a proud and lively career. And let every man and woman who works in any area of our national government, in any branch, at any level, be able to say with pride and with honor in future years: "I served the United States government in that hour of our nation's need."

America's political future rests with the election of people with honor, integrity and dedication to the public good.

One thought on “PUBLIC SERVICE INVOLVES AN OBLIGATION OF HONESTY, INTEGRITY AND CHARACTER. SO, WHAT HAPPENED TO AMERICA?”