In 1918 a 47 year old Japanese man, Tokichi Ishii, was hanged for murder in Tokyo. The story of his life and conversion to Christianity has been written by the man himself, while waiting in prison for his execution. His autobiography,  A Gentleman in Prison, The Story of Tokichi Ishii, Written in Tokyo Prison, was translated to English and published in 1920. His story became one of the most famous in Japan. He was a notorious Japanese thief and murderer. He had been jailed more than twenty times. His story is unique.

A geisha had been murdered in Tokyo and her lover, a man named Oharu, was charged with the murder. He confessed to the crime to the police, however at his trial he denied the charge and insisted that torture had been used by the police to obtain his confession. The circumstantial evidence against him involved 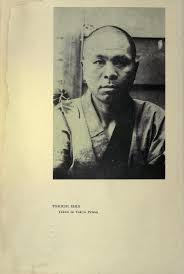 the fact that he was the last one to be seen with the girl, it was known that they had quarreled and he had confessed to killing her. Oharu was convicted and sentenced to be hanged. While waiting in prison for his execution Tokichi Ishii was arrested for one of his many crimes and was put in the same prison as Oharu.

There were seven or eight other men being held in the same cell with Ishii. During their discussions they talked about the man sentenced to be hanged for the murder of the geisha. Ishii told them he was the one who had actually killed the geisha and not the man who had already been convicted. Prison officials were notified and Ishii admitted to the crime. This caused a great sensation in the newspapers and among officials. As a result the condemned man was released and Ischii was required to stand trial.

Ischii Was put on trial based upon his confession. However, the court found no evidence to connect Ischii to the murder and in light of the circumstantial evidence Oharu to the murder, acquitted Ischii In spite of his confession. Ischii protested the acquittal and the public prosecutor appealed the verdict. The public publicity was intense because of the strange circumstances. Here, a man confessed to a crime, then denies it,  but is sentenced to death on circumstantial evidence. Then another man confesses to the same crime, insisting the other man is innocent, but  he is acquitted in spite of his confession. The notoriety of the case resulted in it dragging on in courts for years. At the second appeal trial, evidence was produced which confirmed Ischii's confession and he was sentenced to death.

Tokichi Ishii had little education and had lived a life of crime with cruelty and no regard for others. While in prison, two women, who were Canadian Christian missionaries, visited him to talk to him about Christianity, but he ignored them. They left a Bible for him to read. Having nothing else to read he decided to look at it. He began to read the story of Jesus and trial and execution. His attention was riveted to the words: "Jesus said, Father, forgive them, for they know not what they do." That sentence transformed his life. The words moved him very deeply and in his book he wrote:

"I stopped: I was stabbed to the heart, as if by a five inch nail. What did the verse reveal to me? Shall I call it the love of the heart of Christ? Shall I call it his compassion? I do not know what to call it. I only know that with an unspeakable grateful heart, I believed."

After the conversion and his belief in Christianity his mental attitude was profoundly changed. As he wrote in his book:

"People will say that I must have a very sorrowful heart because I'm jail waiting the execution of the death sentence. This is not the case. I feel neither sorrow nor distress or any pain. Locked up in a prison cell 6' x 9 in size I am infinitely happier that I was in the days of my sinning when I did not know God."

One of the missionaries later wrote that during her visits, after his conversion, he said his reaction to being sentenced to death was: "God's own judgment and I am satisfied." She described how, during the days of waiting for his execution, he wrote down the circumstances which led him to crime, the story of his repentance and conversion which became the book. She said he worked night and day until the book was finished because he did not know the precise date when he would be executed.

Since translated into English in 1920, the book has remained well-known among Christian workers and is an extraordinary story of a dramatic change In a man whose life was one of evil until he reached the end of his life. It's an inspiring story of redemption and repentance. Lessons for all of us.