Thomas Joseph Tobin is an American Bishop in the Roman Catholic Church at Providence Rhode Island. He was born in 1948 and after studying in Rome was ordained to the priesthood in 1973.   Pope John Paul II appointed him Bishop in 2005.

Bishop Tobit falls into that category of American prelates whose self-righteous conviction that they are on the exclusive high moral ground closes all doors to other viewpoints. This is a Bishop who became involved in a public dispute with Rhode Island Congressman Patrick J Kennedy over the Congressman support for the right to abortion during the health care debate. Kennedy's view about the importance of separation of church and state and his objection to passing laws imposing moral views resulted in Tobin barring him from the receiving communion. When President 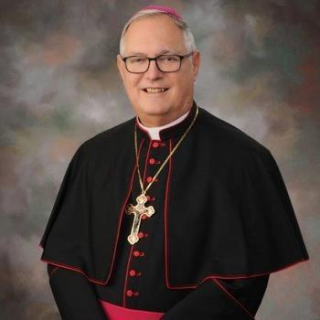 Obama announced his support for same-sex marriage, Tobin said it was "a sad day in American history." His public stance is  that it is morally wrong for anyone to vote for a pro-choice, feminist, or pro-gay rights political candidate.

He has joined the other right wing American prelates who have attacked Pope Francis as a moral liberal who is damaging the church. In one interview he said:

"The other thing I want to say though, is that I'm a little bit disappointed in Pope Francis that he hasn't, at least that I'm aware of, said much about unborn children, about abortion, and many people have noticed that. I think it would be very helpful if Pope Francis would address more directly the evil of abortion and to encourage those who are involved in the pro-life movement.

This interview he had published in his own diocesan paper as a direct affront to the Pope. His continued defamatory attack on the Pope ignores the fact that the Pope has spoken frequently about human dignity. The Pope has by word and deed supported the absolute, unconditional love God has for us all. In spite of this, Bishop Tobit joins the "tea party" like conservative branch of Catholic leaders whose goal is to return to the days of Latin mass and pre-Vatican II theology.

Bishop Tobin, along with his fellow conservative prelates of the church, blame the increasing number of Catholics who are leaving the church and joining other churches or simply not participating any longer on their "lack of faith." For these self-satisfied, self righteous religious leaders, the problem is not them, or their failure to relate to the problems people have today, but rather a failure on the part of the disillusion Catholics who no longer relate to their narrow theological viewpoints.

Worse, Bishop Tobin has it exactly backwards when he blames those leaving the Church for a lack of faith. The reason Catholics are voting with their feet is because of sanctimonious and imperious bishops, like himself, who have no understanding or relationship with their ordinary parishioners. These are religious leaders who are unwilling to even consider the need to examine the concerns of the faithful. Like the mother watching her son in the army parade who said “Look, everyone is out of step except my son Larry” he views everyone else as out of step with him. He refuses to grasp  the distress of the people with a smug & complacent attitude of self-righteousness. Not only that, he feels comfortable correcting and criticizing Pope Francis. When Francis said we should freely give beggars Tobin published his article “Three reasons  not to give to Panhandlers.” He hasn’t been hesitant to say he is “disappointed” in Pope Francis as well as making accusations “Pope Francis is fond of creating  mess. Mission accomplished.” All I can think of, when I read this is Luke 18:

The Parable of the Pharisee and the Tax Collector

To some who were confident of their own righteousness and looked down on everyone else, Jesus told this parable:  “Two men went up to the temple to pray, one a Pharisee and the other a tax collector. 11 The Pharisee stood by himself and prayed: ‘God, I thank you that I am not like other people—robbers, evildoers, adulterers—or even like this tax collector. 12 I fast twice a week and give a tenth of all I get.’

“But the tax collector stood at a distance. He would not even look up to heaven, but beat his breast and said, ‘God, have mercy on me, a sinner.’