There can be a lot of wisdom in stories created for children and in the  form of fables passed from one generation to another. Here are just a few examples I believe represent learning experiences for us all

The Velveteen Rabbit is a children's book written by Margery Williams and illustrated by William Nicholson. It chronicles the story of a stuffed rabbit's desire to become real through the love of his owner. It was originally published in 1922. This selection from the book is a discussion about what makes a genuine human being. One that's "real." What our world needs right now is a government of leaders who are honest, truthful and genuine. There is a lot of wise 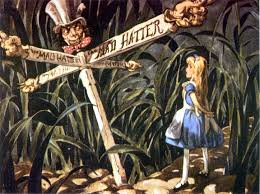 advice in this short passage applicable to us all.

"What is real?" asked the Rabbit one day, when they were lying side by side near the nursery fender, before Nana came to tidy the room. "Does it mean having things that buzz inside you and a stick-out handle?" “Real isn't how you are made,' said the Skin Horse. 'It's a thing that happens to you. When a child loves you for a long, long time, not just to play with, but REALLY loves you, then you become Real.'
'Does it hurt?' asked the Rabbit.
'Sometimes,' said the Skin Horse, for he was always truthful. 'When you are Real you don't mind being hurt.'
'Does it happen all at once, like being wound up,' he asked, 'or bit by bit?'
'It doesn't happen all at once,' said the Skin Horse. 'You become. It takes a long time. That's why it doesn't happen often to people who break easily, or have sharp edges, or who have to be carefully kept. Generally, by the time you are Real, most of your hair has been loved off, and your eyes drop out and you get loose in the joints and very shabby. But these things don't matter at all, because once you are Real you can't be ugly, except to people who don't understand. Once you are real you can't become unreal again. It lasts for always.”

In 1885 Charles Lutwidge Dodgson published a book Alice’s Adventures in  Wonderland commonly abbreviated to “Alice  in Wonderland. He published it under a pseudonym Lewis Carroll. It is a tale about a girl named Alice falling through a rabbit hole in a fantasy world populated by peculiar characters. There are many selections of the book of relevant subjects  that remain current today. Here are some examples:

Advice about telling a story  "Begin at the beginning," the King said, very gravely, "and go on till you come to the end: then stop.”

If you don't have an objective you will never accomplish anything

“Alice asked the Cheshire Cat, who was sitting in a tree, “What road do I take?”
The cat asked, “Where do you want to go?”
“I don’t know,” Alice answered.
“Then,” said the cat, “it really doesn’t matter, does it?”

Fear is better than love Niccolo Machiavelli in his classic book The Prince wrote: "It is much safer to be feared than loved because love is preserved by the link of obligation which, owing to the baseness of men, is broken at every opportunity for their advantage; but fear preserves you by a dread of punishment which never fails.” Lewis Carroll shortens this to: The Red Queen: "You're right, Stayn. It is far better to be feared than loved."

Communication is what the other person hears, not what you say:

Aesops Fables or the Aesopica, is a collection of stories credited to Aesop, a slave and storyteller believed to have lived in ancient Greece between 620 and 564 BC. The fables were repeated by oral tradition until some three centuries after his death when they were put in writing. This is his story about the man, the boy and their donkey, with a good lesson for us about trying to please other people.

The Man, the Boy, and the Donkey

A man  and his son were once going with their Donkey to market. As they were walking along by its side a countryman passed them and said: “You fools, what is a Donkey for but to ride upon?”

So the Man put the Boy on the Donkey and they went on their way. But soon they passed a group of men, one of whom said: “See that lazy youngster, he lets his father walk while he rides.”

So the Man ordered his Boy to get off, and got on himself. But they hadn’t gone far when they passed two women, one of whom said to the other: “Shame on that lazy lout to let his poor little son trudge along.”

Well, the Man didn’t know what to do, but at last he took his Boy up before him on the Donkey. By this time they had come to the town, and the passers-by began to jeer and point at them. The Man stopped and asked what they were scoffing at. The men said: “Aren’t you ashamed of yourself for overloading that poor Donkey of yours—you and your hulking son?”

The Man and Boy got off and tried to think what to do. They thought and they thought, till at last they cut down a pole, tied the Donkey’s feet to it, and raised the pole and the Donkey to their shoulders. They went along amid the laughter of all who met them till they came to Market Bridge, when the Donkey, getting one of his feet loose, kicked out and caused the Boy to drop his end of the pole. In the struggle the Donkey fell over the bridge, and his fore-feet being tied together he was drowned.

That will teach you,” said an old man who had followed them: “Please all and you will none."