I was going through the wonderful Anacortes Museum (https://www.anacorteswa.gov/333/Museum) photo collection and was reminded of my own life growing up in Anacortes. I was reminded of the lines from Lewis Carroll's classic book Alice in  Wonderland. Alice asks the White Rabbit, "How long is forever?" 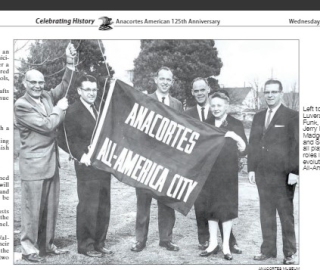 The White Rabbit responds "Sometimes just one second." In my case, while the events may have happened a "forever" ago, in my mind it seems like just yesterday. For example, I clearly can see what is shown in this photo from the 1950's, when the city was declared an "All American City." That's dad on the far left holding the rope, next to Wally Funk.

This is a picture of the house directly across from our family house, where I grew up.  Located at the end of 9th street, the house was built in 1923- 1924. After the death of the husband, it was sold to Douglas and Cora Almond, who lived there when I was a child. Later Jim Funk, Wally's 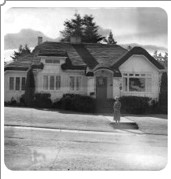 brother, and his wife bought it. The thatched roof was the only one in town. I remember when it had to be re-roofed. As a youngster I was paid to help pick up while the roofing went on. Most of the wood shingles had to be steamed and bent to fit the rounded roof structure. It was a large project. The Almond's had a maid and I was very impressed with that fact.

The Museum had a lot of photos of sports at Anacortes High school. There were  photos of basketball players I admired growing up. The player on the far left is Gene Lundgaard and in the middle, Johnny Jurkovich. Both were outstanding players. On that team was Jack Hoskins who was of particular significance to me because, while a youngster, he coached our neighborhood team of six basketball players. We were in the 6th or 7th grade and our team was named the "Termites." We played basketball together. Jack later became an attorney, I believe, and moved to another state. 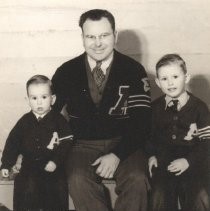 Anacortes basketball was an important part of my life. From the early 1940's until long after I graduated from Anacortes High school in 1953, basketball was a city obsession. The gym would be packed, standing room only, for home games. The entire town would empty to travel for away games. That was in large part, due to coach Richard "Boots" Wooten. He was basketball coach from 1943 to 1947 and his teams were winners. The whole town was caught up in following the games. After he left to become head coach in Walla Walla, Ray Cook took over. It was not until Bill Taylor became coach the town became basketball obsessed again. With Bill's winning teams, the town caught the basketball fever again. Bill's career record of winning exceeded that of Wooten.

I've previous written about the profound influence Taylor had on my life and the debt I owe him for the life direction he gave me. He taught his players to be professional and ethical. Unfortunately, my team wasn't great. Here's a photo of the team from the Museum files. 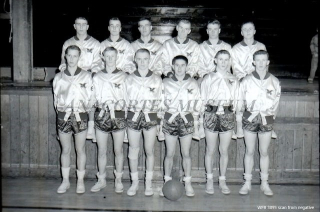 As a result of my childhood experiences in Anacortes, I saw it as primarily a logging and fishing community. Salmon purse seining was a very important part of the community as were the many sawmills and timber mills in Anacortes in the early 1940s through the 50s. There was a large fleet of boats boarded Anacortes. Anacortes was the main point of departure for all of the fishing fleet during the summer season. Each week the boats would stock up with groceries for the week fishing. Our family grocery store provided supplies to almost the entire fleet. The boats would leave late Sunday afternoon for the fishing grounds, fish for the week and return on Friday. They would phone and their orders on the way in on Friday and the store would employ a crew of people to box up groceries that were ordered for each boat. Our store had trucks to transport the groceries to the docks where the boats were tied up. The men in the trucks would carry the groceries from the vehicles to the boat itself. Sometimes five boats would be tied together and you had to cross over them to the last boat.

Many of the boats left for Alaska fishing in late May. Before leaving they would buy a large supply of groceries for the Alaska season. Our store would deliver the groceries to the boats for the Alaska trip and season. These boats returned in late June for the fishing in the San Juan Islands. Fishing season would generally last until late August. There was however, a smaller fleet of boats that fished in the Fall of the year. When the fleet was in town, Anacortes was a "jumping" place. The bars were full. There were often street dancing. The salmon fishing industry was a huge part of Anacortes business and a major influence in my life.

Through dad's grocery store connection with  purse seine boats, I was hired to fish on the boats beginning in the 9th grade. The boats had crews of seven to eight men. In addition to the captain, there was a cook, an engineer, two men in the skiff and men to pull the net aboard. I elected to work only in the skiff which avoided being too close to the captain and the other crew members demands on board the boat. Before the advent of powered devices to pull the net on board, our role in the skiff was to be disconnected from the main vessel with one end of the net tied to the skiff. The other end was connected 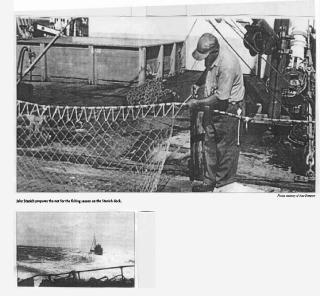 to the main boat. Together we would pull the net into a  "U-shaped" open net.

We also released a shorter net that extended from the opposite end of the net, called a "lead." After leaving the net open long enough for salmon to swim into the center of the open net, we would pull Into the skiff the shorter net. We would then tow our end of the net back to the main vessel. The end tied to the skiff would be transferred to the main boat. It was then my job to get on the main vessel and pull the excessive corks that collected over the rail of the boat. We would then go to the stern of the boat and manually pull the net, stacking it on the stern until the end of the net,  where the fish would be located, was alongside the boat. Depending upon how many fish had been caught, a large hoop with a net was lowered and the fish scooped up, dropping them into the hold of the boat. If there were not a lot of fish the crew would pull the end of the net with the fish inside onto the deck where the fish would then be put into the hold of the boat.

It was hard work. Each time the net was put in the water and retreat back onto the boat was called a "set." Depending upon how good the fishing was and the skill of the captain of the boat, there could be five or more sets a day.  Fishing began around 3:30 AM for breakfast and to begin the fishing day. It was hard work. However, it was also my privilege to have made many trips to Alaska fishing on these boats from my high school through college years. I worked with men who usually were significantly older than I was. Many were from the old country and spoke to each other in their native language. Some were not well educated, but all of them were good at arithmetic. Playing card games with them was dangerous because cribbage and pinochle (which involved counting) were favorite games. The truth is, that my experience fishing on the purse same boats over the many years I fish was worth substantially more than any college education I received and better training about dealing with people that I was taught in law school. I am indebted to the fishing trade and the people who tolerated my immaturity for the education they provided me. Not only that, I enjoyed the work and made money doing it.

It was a privilege to have grown up in Anacortes. It was even more of a privilege to have had parents who were from immigrant families.  They high standards of  morality and their belief that living in America was a gift to us, had a profound influence on my life.