This year's annual Skagit Pioneer picnic will honor my mother's family, the Babarovich family as Pioneer Family of the Year. It takes place on Thursday August 2nd as the 114th Annual Pioneer Association Picnic. It will take place at Pioneer Park from 11 am to 2 pm at Pioneer Park in La Conner. T

he park is located near the Rainbow Bridge and admission is $15 per person. Music, speeches and a salmon BBQ are featured. My sister Anita Mayer and I, along with other family members, will give very brief talks. 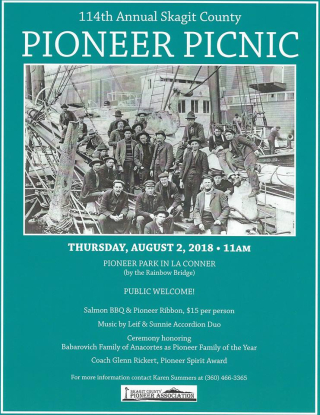 Babarovich was born April 12, 1861 in the village of Splitska on the island of Brac in the Adriatic Sea, Austria. He died in Anacortes, Washington March 5, 1935.  I was born 12 days after he died. My grandmother Marija was born September 9, 1863 on Brac and died in Anacortes on August 8, 1953.

He and my grandmother had seven children all of whom, except my mother, Mary, who was born in Anacortes, immigrated from a small island named Brac off the coast of Split, Croatia. I've written about their journey from the old country to America which happened as a result of contact with one of my grandfather's brothers who had previously left for America and then lost contact with the family back home.

The brothers, including my grandfather left first and moved to an island off  of Anacortes. My grandfather in 1902 sent for my grandmother Marija, who, along with her five children, traveled in 1902 with his brother Spiro's wife and children to their homestead. They were met by one of the brothers at the Burlington railroad station with a wagon pulled  by horses. They went from there to Anacortes and then by mail boat to Sinclair Island where the brothers had a homestead.

After tiring of farming my grandfather rigged a wooden scow with a homemade sail and navigated them all to Anacortes. They found a rental house and finally settled at 1108 6th Street in Anacortes. In addition to their large garden and catching seafood of all kinds they survived by grandmother boarding people and grandfather working as  a commercial fisherman. Their youngest child Mary, my mother, was born in Anacortes in 1905

Peter and Marija considered themselves Austrians. Peter had served ten years in the Austro-Hungarian navy before he married. He kept a framed portrait of Emperor Francis Joseph Ist  and his  wife hanging in the parlor of the Babarovich home. He was proud of his service in  the navy where he had learned to read and write. The kitchen in the old house on 6th street was huge. The house was rectangular in shape and two stories high. The front parlor of the house was kept very clean and neat where you entertained visitors, but everything else happened down the long narrow hall in the huge kitchen. I have clear memories of that house, the large vegetable garden next to the house and the back area with chickens and rabbits. This was a wonderful and inviting kitchen where there were always unusual smells and food cooking with people sitting while eating and talking.

Peter supported the family from the garden and ocean. He caught crab which were sold and fished for both income as well as food for the family. They had chickens and a garden to feed the family. He rowed a boat to place his crab pots and to get around. They hunted duck and lived off the land in many respects.

I'm pleased our family is being honored this year.