In February of this year I lamented the apparent demise of honesty in American government, with particular focus on our president. https://paulluverajournalonline.com/weblog/2018/02/public-service-involves-an-obligation-of-honesty-integrity-and-character-whats-happened-to-american-.html

Michiko Kakutani has written a book The Death of Truth. It was reviewed by Chris Hayes in the Sunday, July 29 New York Times. Hayes, who is a host of "All In" on capital MSNBC, begins his review: 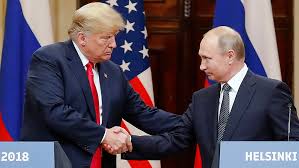 Americans either believe what he says or delight in his obvious deceptions."

Certainly he is not the first president to tell public lies. From Dick Nixon "I'm not a crook" to Bill Clinton's "I didn't have sex with that woman" lies about significant events have been said by presidents. But, never in the history of the country, lies of this magnitude and volume by a sitting president.

The most recent example was in Helsinki. At the press conference in Helsinki following his meeting with Vladimir Putin, he was asked a straightforward question as to whether he believed the United States intelligence agencies conclusion that Russia had interfered in the presidential election. His response was: "My people came to me… They said they think it's Russia. I have President Putin; he just said it's not Russia. I will say this: I don't see any reason why it would be…" When he was met with a firestorm of outrage by the American public and members of his own party, he was quick to reverse course and then say that he had simply" misspoke." He claimed that he had meant to say "wouldn't" instead of "would." That's the equivalent of someone publicly saying "I hate you" and then claiming they misspoke by leaving out the word "don't." The two statements are diametrically in conflict with each other. That makes it difficult to explain why he didn't correct the statement at the press conference when he was asked additional questions about it and why it took several days of extreme adverse reaction before he realized his "mistake" of using the wrong word.

"What you're seeing and what you're reading is not what's happening." That's what Donald Trump recently said regarding media coverage attacking the wisdom of his trade tariffs. It is very close to the line from the Marx Brothers 1933 movie Duck Soup When Chico Marx says the line" who are you going to believe, me or your lying eyes?" Comedians have used that line for years to get a laugh out of audiences. But, Donald Trump wasn't joking. He said it seriously. That's so outrageously ridiculous it should have nationally evoked laughter and jeers. So, why wasn't there any from his supporters and why wasn't he embarrassed or worried about losing the trust of his supporters? Because he was confident it wouldn't bother them. In fact, afterwards his favorable standing among his support group was at 62%.

This situation is not due to confusion over the philosophical meaning of truth like that raised in the Bible. In John 18 Pilate, when Jesus tells him that "everyone on the side of truth listens to me" responds with: "what is truth?" There is no confusion about recognizing what truth is or what lies are.  Every school child, politician and & president of a country knows the difference between truth and lies. This situation is due to Mr. Trump's conclusion that he can tell lies, both large and small, and get away with it  if you're Donald Trump. Based on the enormity and frequency of the lies, it appears he is right.

People are likely to continue to lie if they are not held accountable for it. People are not held accountable for their lies until there is a punitive response. The liar is held accountable if punished through the justice system or, as a politician, by being voted out of office. Otherwise, in the absence of a personal moral code, there is little incentive not to lie. That appears to be our present situation at the highest level of government in this country. There are a myriad of psychological principles that explain in part why people continue to support a politician whose conduct they may find personally morally objectionable. The most fundamental one, however, is self-interest. A strong motivator, in that regard, is self protection or the fear of harm. This is the selfish motive to support a protector against harm in spite of disagreement with the individuals moral or ethical views or actions. Another motivator is also connected in that regard. The phrase "the ends justify the means" refers to the willingness to accept wrong conduct in order to achieve a goal that is beneficial to the individual. This is the idea that if the end result is good, at least for you, then it doesn't matter if the means to that end are wrong. All that matters is the end results. When that idea is expressed by people who claim to be fundamental Christians it reveals a flaw in their moral reasoning because it condones breaking God's commandments in order to achieve a moral outcome they want. That's fundamentally in conflict with the Bible and with the teachings of Jesus as well. Yet, approval ratings of Mr. Trump by his supporters, a great deal of who claim to be evangelical Christians, demonstrate they do accept the premise that the ends justify the means even if the means are immoral. For this group the favorable achievements since Donald Trump has become president apparently justify support for a man who is acknowledged to lack a moral code in a variety of ways.

I think this tells us as much about Americans who accept unbelievable explanations, implausible promises and repeated moral misconduct from our president and other political leaders than it does about them. The baseball cap should read "Bring back honesty & Dignity to America."