Prince Machiavelli once said: "politics has no relation to morals." Nor does it appear to have any relation to logical thinking and honest reasoning  as far as president Trump, Mitch McConnell and the Republicans are concerned. Let's start with the facts and then examine the arguments they are making about the government shutdown.

FACT: There is only one reason and one person who is responsible for the shutdown- Donald Trump. He famously took credit for it on public television: "I am proud to shut down the government." In addition, he assured Democratic leaders he would not blame them for the shutdown. 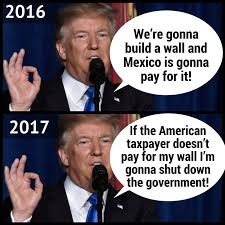 FACT: The shutdown is an arbitrary decision totally made by Donald Trump.

FACT: There is only one reason for imposing the shutdown and that is to use it as a political ploy to force Democrats to agree to a $5.7 billion use of taxpayer money to construct the wall. That's because he is determined to complete a campaign promise. His tactic is that the political fall out by people suffering from the shut down would result in blame for Democrats and force them to agree to spend billions. Millions of people endure the pain of the shutdown as political pawns in this political game.

FACT: During the campaign Donald Trump repeatedly assured voters that Mexico, not U.S. tax dollars, would pay for the wall. It was only when it became  clear that that was not going to happen that he decided to force payment in tax dollars instead.

FACT: Donald Trump,in addition to being the sole cause of the shut down, also has absolute power to immediately end the government shutdown if he wanted to. However he has refused end it until he gets his way.

CONCLUSION: The shut down was a totally arbitrary choice made by Donald Trump alone. Democrats had no role in the decision.  He has the exclusive power to end the shut down immediately and does not need anyone else's assistance or permission to do so. The shut down, as well as ending it, is totally the responsibility of Donald Trump.

The lack of logic about the situation is illustrated by President Trump threatening to declare a national emergency in order to claim the power of appropriating billions in taxpayer money to build the wall. However, assuming that there was a "national emergency" as a result of the shutdown, that emergency is solely and totally due to the actions of the president. It would make as much sense to use a national emergency claim as it would be for a  child murdering his parents then asking the court for mercy because he was now an orphan. Any claim of "national emergency" rests upon the fact Donald Trump created it and could end it any time he chose.

Think about the situation logically. The person who is fully responsible for creating the shut down and has the power to end it anytime he wants, refuses to do so, causing enormous difficulties for millions of taxpayers. He insists his demands for billions in tax dollars are consented to by political opponents before he will do so. This is nothing short of ordinary blackmail causing significant public misery. He willing to punish innocent taxpayers to get his way.

It's an embarrassment of totally illogical thinking for president Trump, Mitch McConnell and Republicans to blame Democrats for an unwillingness to "negotiate" over the demand by Trump for billions in taxpayer money. Their position is like a child kidnapper blaming the parents for refusing to bargain over the amount of ransom the kidnapper is demanding for freeing the hostage child. It makes no sense.

I'm sorry for all the people who are being punished by the choice of President Trump, with full cooperation of Republicans, because the President wants taxpayer billions in order to satisfy a campaign promise, while choosing to ignore his repeated public promise to voters that Mexico, not American taxpayers, would pay for it. I am equally appalled by the lack of courage or honesty on the part of Mr. Trump, Mitch McConnell and Republicans to step up and take the responsibility instead of ridiculously illogical excuses.