The concept of karma teaches a cause and effect function in life. Good intent and good deeds contribute to good karma and future happiness, while bad intent and bad deeds contribute to bad karma and future suffering. The same idea is found in Ralph Walter Emerson's famous essay "Compensation" where he argued life has a cause and effect rule. He wrote:

"Every act rewards itself, or, in other words, integrates itself, in a twofold manner; first, in the thing, or in real nature; and secondly, in the circumstance, or in apparent nature. Men call the circumstance the retribution."

And the Bible, in Luke 6:38, says: "Give, and it will be given to you. Good measure, pressed down, shaken together, running over, will be put into your lap. For 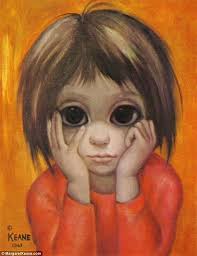 with the measure you use it will be measured back to you.” So, here is a story about karma involving famous paintings of the 1960's and a story that was made into a movie.

Walter and Margaret Keane were married in 1955 in Honolulu. He was a real estate sales person. Margaret was a painter. She began painting when she was a child and took art classes at the Watkins Art Institute in Nashville. After their marriage she began painting children with distinctive large eyes. Her husband gave up real estate and began to market her paintings. They became commercially successful and were sold nationwide. But, unknown to Margret, Walter sold them while claiming he was the artist who painted them. By the early 1960s the paintings, prints and postcards, Margret created, were selling in the millions. Celebrities like Natalie Wood Dean Martin and Jerry Lewis were buying the originals. They were a financial success. Her husband handled all of the money and  She was kept in the dark regarding their earnings.

Margaret did not discover her husband’s deception of claiming to be the creator for several years. When she did find out, he 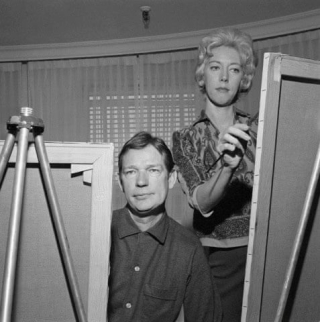 convinced her to remain quiet because he claimed they would sell better if he were the painter. Margaret felt trapped but remained in the marriage until finally, she had enough and they were divorced.

After the divorce Margaret moved to Hawaii and started painting the big eyed children again. For some time she said nothing about the truth of who painted the pictures until a radio interview in 1970 when she disclosed  that she had painted all of the paintings. As as result of the publicity, a reporter for a San Francisco newspaper arranged a “paint out” between Margaret and Walter, and challenged Walter to show up, but he declined.

Some months later, when Walter told a newspaper reporter that Margaret was only now claiming credit for his paintings because she thought he was dead, Margaret sued him for defamation. At the trial, Walter represented himself. During the trial the judge decided to give them both the opportunity to demonstrate who the painter was. He allowed them each an hour to paint the big eyed children in front of the jury while in the courtroom to determine who was telling the truth. Walter declined claiming he had a sore shoulder. Walter didn’t paint anything while Margaret finished a picture of a big-eyed child in 53 minutes. The jury awarded her $4 million for her damaged reputation and the emotional distress Walter had caused. She was declared the real painter and not Walter by the jury verdict.

Walter Keane remarried and divorced once again, spending his last days penniless, bitter, and alone. Until his death in 2000, at the age of 85, he still claimed that he was the real painter of the “Big Eyes” paintings. As one newspaper wrote: "It was absurd. He kept comparing himself to Michelangelo. He doubled down on his whole lie." Margaret, on the other hand, remarried in 1970 and found some peace in Honolulu where she continued to paint. She later moved back to San Francisco.