We leave in a few days for the French Riviera for a couple weeks visit. We have been to this area often in the past, but this trip we are locating there as our central location. The Cannes Film Fesitival is going on from May 14th through the 25th and the hotels on the French Riviera are crowded during that time. As a result of accommodation issues we are staying at three different hotels in the general area rather than one hotel.

us to the hotel Cap Estel at Eze France. This unique hotel is built on a private peninsula on the edge of the Mediterranean Sea. Located between Nice and Monte Carlo, it is fifteen minutes from Monaco and thirty minutes from Nice. There are only fifty guest rooms with Michelin starred food and botanical grounds in a private hideaway setting. It is a five star luxury hotel still owned by the same family. It is a unique hotel where we will be for three nights. In addition to enjoying the exceptional hotel location there are towns to visit and explore. It's a good place to rest after our travel.

From there, we will be driven to the Hotel Belles Rives located in the town and health resort of Juan-les-Pins. This place is west of the town of Antibes. This Art Deco hotel has been owned the by the same family since 1929. It was totally restored and exhibits many of the 1930's features and furnishings. There are palm trees, a beach and a spectacular view of the sea.  The hotel location is famous for having accommodated F. Scott Fitzgerald and his wife Zelda in 1925 who stayed in a Villa and a cove at Cap; d'Antibes. Fitzgerald wrote his masterpiece Tender is the Night while staying there. The area was frequented by such celebrities of that era as Rudolph Valentino, Hemingway, and Pablo Picasso. In 1929 the villa became the Hotel Belles Rives. The town of Juan-les-Pins is a major holiday destination, popular with the international jet set with casino, nightclubs. The seaside resort town has a large number of shops, restaurants and cafes. We spend three nights at this luxury hotel before moving on.

Our next stop is my favorite hotel in Europe, Hotel Du Cap-Eden-Roc. We stayed in this incredible luxury hotel for several days once before and thought it one our 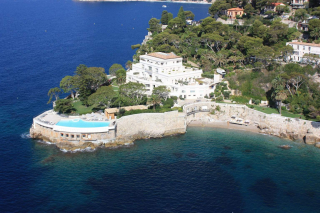 favorite places to stay. It is located at the Mediterranean Sea on the southern tip of Cap d'Antibes. Antibes is a ten minute drive away and the Cannes is twenty five. This seafront hotel has thirty three private cabanas and 118 guest rooms with stunning views of the sea as well as the beautiful hotel gardens. This wonderful hotel has been voted Best European hotel by Conde Nast travelers. The many accommodations include a luxury limousine service with drivers that are fluent in French and English. 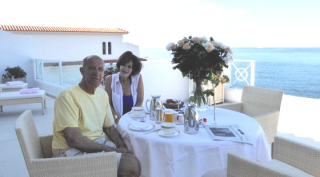 World War II the pavilion was bombed by the United States Navy attempting to destroy German cannons. The hotel was later restored to its former glory. In 2007 the hotel began a seven year restoration project. The multi million euro project was completed in 2013. In 2014 the hotel celebrated it's 100th anniversary. In 2016 this five star hotel was awarded the "Palace Distinction." It is truly an extraordinary luxury hotel on the sea. We are there five nights before we return to the Nice airport for our flight to London and then on to Seattle.

This trip is also a test of my endurance and agility to travel. With four joint replacements and age eighty four, all travel is a challenge for me. Nevertheless, I am looking forward to the trip which has been beautifully planned by Lita with our long time travel agent Inger. Lita has had all the challenges of the many details required for this kind of a trip. I am thankful she is able to do this for us.