Our trip to France began on Sunday, May 19. We had a 7:30 PM flight from Seattle to London Heathrow Airport. We arrived at 12:45 PM on May 20. Our connecting flight from London to Nice France left at 4:15 PM arriving at 7:25 PM in the evening. By the time we arrived in Nice it had been a very long travel day. We collected our luggage and met our driver for the trip to the hotel Cap Estel located in the Côte d'Azur on the French Riviera. 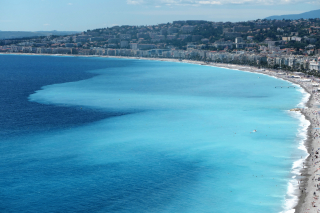 Lita's planning of the trip had been complicated by two major events in France. The Cannes Film Festival took place in May ending shortly after our arrival. This international film festival attracts celebrities and people from all over the world. Not only that, the 77th  Monaco Grand Prix was also scheduled for May while were were in France. Since 1929 this famous race is considered the most prestigious automobile race in the world. The race is held on a narrow course laid out in the streets of  Monaco, with many elevation changes and tight corners as well as a tunnel, making it one of the most demanding tracks in Formula One racing. Crowds of people from all over come there for the race. As a result of these two events we had trouble finding available hotel accommodations. We were able to book a stay for three nights at Cap Estel. Then three nights at the Belle Rives Hotel, followed by a week  in Hotel du Cap-Eden–Roc for a two week trip to France.

The Cap Estel hotel is a five-star luxury hotel  located on its own 6 acre Peninsula that juts out into the Mediterranean Sea. Its location is unique. Surrounded on three sides by water with magnificent panoramic 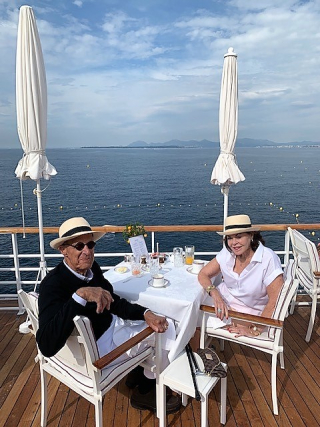 views it has been voted the best seafront hotel in France. It is only 10 minutes away from Monaco and 30 minutes from Nice France. It's a central place to explore the beauty of the area. There are only 28 rooms including a few large suites. Originally built as a private mansion in 1899 it is secluded and surrounded by beautiful gardens. It was extensively renovated in 2003. There are two swimming pools, a private beach and fine dining. The restaurant has a Michelin Star. Our suite overlooked the water, with a large balcony and included access to a very big common area shared by other guests. What a wonderful place to rest after our trip. Great suite, great view and wonderful food. We were able to book a large suite with a balcony overlooking the property and the sea.

While at the hotel we were driven to Monaco. The city was "under construction" for the great race. Bleachers for observers and barricades for the race course and preparations made it difficult to get around. To further complicate things, cruise ships had discharged their hundreds of guests into the town and the sidewalks were crowded. Nevertheless, it was enjoyable to see the great casino, shops and activity.

It was a relaxing place to stay with wonderful accommodations and excellent food.

From the Cap Estel, we were driven to the Belle Rives hotel located in walking distance to the small town of Juan-les-Pins. The hotel is located right on the water, 6 miles from Cannes and 14 miles from Nice. The hotel is famous because F. Scott Fitzgerald and his wife Zelda, in 1925, rented it when it was a private mansion. It was in this place he wrote his masterpiece Tender is the Night. His famous book The Great Gatsby was based upon their experiences while staying here. It was the time of the roaring twenties and they entertained people like Rudolph Valentino, Hemingway and other famous people of the time. In 1929 the property was purchased and converted to a hotel. Renovations were made to convert it to a hotel. More recently there was an extensive renovation as well.

Our suite was named the "Zelda" suite because it was her bedroom area while they were living here. The hotel interior is all in Art Deco and Picasso. The elevator is the old fashioned kind with an outside door and two interior doors. ;The interior is richly decorated and would fit into the 1920's in appearance. There are only 43 rooms, including 5 suites, with a gourmet restaurant and a private beach. The town of Juan-les-Pins is walking distance away. Lita walked to town daily while I relaxed at the hotel. The actress Andie McDowell (think movie: Ground Hog Day) was staying at the hotel after attending the Cannes Film Festival.The hotel location is perfect. It is right on the water and close to other places of interest. Close by are other towns. While staying at the hotel we were driven to the nearby town of Villefranche-sur-Mer. Villefranche is a delightful small town on the water. After touring we had lunch outside at a marina where we had eaten on past trips.

From the Belle Rives we were driven to our last location, the five star Hotel du Cap Eden-Roc. This hotel has been taking care of guests since 1870. This was our second stay at the hotel and we were in the exact same suite as our last stay.  Located in Cap D'Antibes, this famous luxury hotel is located on 22 acres of pine groves along the 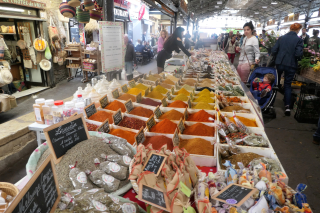 sea.The private residence was made into a hotel in the 1880's. It has accommodated the rich and famous over the years including the Windsors, Kennedys, Churchills and countless movie stars. The saltwater infinity pool was carved out of the basalt rock of a cliff and has two terraces of restaurants overhanging the sea.  Our suite featured a very large balcony with a hot tub pool. The suite faced the water and was so beautiful we ate in our suite several nights.

One day we were driven to Antibes where there is a outdoor market. We enjoyed going through the market with all the fresh products for sale. Lita toured the town shopping while I had a coffee near the market while watching people. On another day we were driven to Cannes. They were still cleaning up the town after the film celebrations and the red carpet was still out. Lita explored while the driver and I toured the city.  We met at the Carlton Hotel in Cannes. Directly in front of the hotel and on the beach, the hotel has a restaurant. We had a wonderful lunch on the beach by the ocean.

On another day we were driven to Nice. Lita enjoyed the Old Town area of Nice which has a very large outdoor market. She said the flower market was particularly huge and impressive. She spent some time exploring it and the small shops. I did some walking and found a comfortable area to sit on the walkway right at the water. The sea was an incredible color of bright turquoise near shore with bright green Mediterranean sea beyond that. While the beach near Cannes is sand, this beach here is totally rocks. That didn't discourage lots of people laying on blankets in the sun. We had lunch there and then were driven to the top of a hill overlooking the city. It was a magnificient view of the town, beach and ocean.

While we were staying on the French Riviera there were enormous yachts anchored all along the coast line. These are super yachts 500 or more feet long 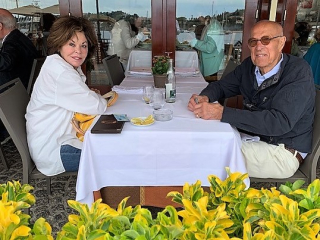 with landing pads for helicopters. One very large yacht costing multi millions of dollars was anchored close by our hotels while we were there. It was owned by a Russian billionare who had a villa nearby and kept it ready for his use when in the area.

While we were in Nice we heard a loud explosion at noon. We both immediately thought of terrorists. Lita asked about it and found out it was a tradition to set off a loud firework explosion device every noon. She learned that there is a famous history behind the practice. It turned that in the 1800's  a wealthy Scottish man and wife spent months in Nice at a mansion during the winter in Nice. Every morning the wife would go for a stroll, meet other Scottish wives and spend time together. She often neglected to return for lunch with her husband. He became exasperated by her failure to return home. He got permission to have a cannon fired every noon to reminder her to come home. A servant would raise a flag on his command and the cannon would be fired. For years the cannon was fired during the months the couple stayed in Nice. People became accustomed to counting on the cannon firing at noon. When the couple stopped coming the citizens asked the municipality to continue the custom. The city agreed and in 1886, the municipality replaced the cannon with a loud firework to be fired by a city employee at noon. The same person has had the job of firing it since 1992. Apparently he has occasionally fired it at 11:00 am on April Fool's Day.

That was a trip to the beautiful French Riviera. We were up at 4 AM on Friday, May 31 to get ready for our pickup at the hotel at 5 AM to return home. We drove to the Nice airport for our flight to London. Unfortunately, we had to get our luggage on arrival and check in for our flight to Seattle. We arrived in London at 9 AM and did not depart for Seattle until 3:30 PM. Our flight to Seattle took 9 1/2 hours arriving 5:10 PM Washington time. It was a long and difficult travel day. As Lita said to me when we got home: "The trip was wonderful but Dorothy was right 'There's no place like home.'