On June 5, after the legislature passed new abortion laws, Catholic Bishop Thomas Paprocki of the diocese of Springfield Illinois issued a "decree" ordering that Illinois legislative members who promoted or voted for the law were not allowed to receive communion at church and should not try to receive it. Not only that, his decree even identifies by name two specific people: the House Speaker and the Senate president. He alleges they:

“Have obstinately persisted in promoting the abominable crime and very grave sin of abortion as evidenced by the influence they exerted in their leadership roles in their repeated votes and obdurate public support for abortion rights over an extended period of time.”

He further directed other Catholic lawmakers who backed the legislation and “thus cooperated in evil and committed grave sin” to not try to receive  Communion "until they had reconciled with the church." 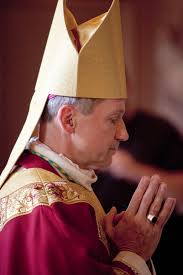 This is the same bishop who had previously issued a decree prohibiting Catholics in same-sex marriage from receiving Communion as well as from receiving ecclesiastical funeral rites "unless they show signs of repentance before death."

In contrast to this bishop's castigation of the legislators,  Cardinal Blase Cupich of the archdiocese of Chicago said about Bishop Paprocki’ actions: “I think it would be counterproductive to impose sanctions …"

Bishop Paprocki originally attempted to influence the voting on the legislation by threatening Catholic legislators with the sanctions he has now imposed. His political lobbying efforts were unsuccessful and he then decided he would influence future voting on religious issues through imposing these religious sanctions and naming key legislators as public sinners. In doing so he is in flagrant violation of IRS tax code 501(c) (3) which grants to nonprofit organizations a tax free status with restrictions. These restrictions include a prohibition against endorsing or opposing candidates for public office at local, state or federal levels as well as contributions to political campaigns. Even public statements for or against candidates as well as lobbying violates the law and authorizes the IRS to strip the organization of its tax-exempt status.

When the obvious violation of the law was pointed out to the bishop as improper attempts to intervene in state politics, his excuse was his decree was issued after the law was passed and “therefore was not a political document.” The hypocrisy of pretending there was nothing political about his actions is shameful, especially for a Catholic bishop.The punishment for such a flagrant violation of the law should be the immediate revocation of the tax-exempt status for the Bishop and his diocese. His diocese should not be given the benefit of tax free status while its bishop decides he can get away with ignoring the law.

But, there are other serious ramifications of unlawful and improper mixing of religion and politics. It violates our democratic and constitutional separation of church and state. It involves a judgmental self righteous and Unchristian determinations by a religious leader. It also means a bishop can dictate how Catholic elected officials must vote or suffer religious sanctions which violates our  democratic and constitutional form of government.

As to the first issue, there is a legal requirement of separation between church and state. The First Amendment of the United States Constitution provides: “Congress shall make no law respecting an establishment of religion, or prohibiting the free exercise thereof.” Article 6 of the United States Constitution says that “no religious test shall ever be required as a qualification to any office or public trust under the United States.” We have observed a legal and constitutional separation of church and state ever since Thomas Jefferson’s articulated the concept. It became a part of the United States jurisprudence in the U.S. Supreme Court case of Reynolds vs US in 1878. Quoting Thomas Jefferson the court concluded that the concept of separation of church and state was an authoritative declaration of the scope and effect of the First Amendment. This bishop believes his moral views should be made the law. Religion imposed by passing laws. The law doesn't allow mixing religion and politics. The punishment for religious non profit groups who enjoy a tax free status but engage in politics ought to be immediate revocation of the tax free benefit.

But, the far worse danger of tolerating the conduct of this bishop is the ultimate consequence of doing so. If this bishop had his way Catholic's elected to public office would have to abide by the bishops determination of what is in conformity with Catholic teaching or his views of morals.  Were that the American way of political action, Catholics running for office would be obligated to tell the public "if you elect me, I am obligated to vote the way my bishop decides on any issue he sees as involving Catholic teaching or morals." However, according to the Gallup poll 48.9% of Americans are Protestants 23% are Roman Catholics 1.8% Mormons 18.2% no religion 2.1% Jews and 0.8% Muslim. If Bishop Paprocki had his way Catholic legislators would be obligated to ignore all voters whatever their religious or non religious views whenever the local Catholic bishop decided the issue involved Catholic teaching. Under bishop Paprocki's idea of America they would have to vote the way he instructed them irrespective of majority of voters views or the individual legislator's own conscience. That's the bishop's view of American democracy. Does that conform to your view of how America functions as a democracy or does it appear to be more like a case involving a judgmental religious leader trying to dictate laws to conform to his religious views through blackmail sanctions?

From a moral standpoint the bishops actions are that of a self righteous and judgmental person which is contrary to the teachings of Jesus. The bishop has decided he is able to judge the two legislators he names, as having  "cooperated in evil and committed grave sin."  In Luke 18, when Jesus tells the story of the Pharisee and tax collector who go to the temple to pray, it is prefaced with: "He spoke also this parable to certain people who were convinced of their own righteousness, and who despised all others." Being convinced of ones own righteousness and passing judgment on others is condemned throughout scripture. It is hard to imagine a better of example of this than a bishop who decides he can determine someone has committed grave sin outside of a confessional.

Not only that, it is an abuse of assumed religious authority to use a sacrament as a weapon to impose one's moral views on everyone else through the passage of laws. In addition, it is an improper use of sacraments and unfairly applied. How many Catholics in his diocese are pro-choice, or use birth control, or support marriage equality? Should he deny them communion? If he were equally "pro life" he would also deny communion to those who support refugee children being stolen from their parents and kept in cages, or who celebrate the death penalty, or the many other attacks on human life around the world. The position of Cardinal Cupich is consistent with the teaching of Pope Francis that Holy Communion is not “a prize for the perfect, but a powerful medicine and nourishment for the weak.” Jesus did not intend the Eucharist to be a food for saints and perfect people; otherwise he would not institute it for sinners here on earth.

In my view the bishop should apologize and be "reconciled with the church" before he receives communion.