We have just returned from Sonora Resort. This beautiful resort is located on Sonora Island in British Columbia, Canada.  Sonora is off the North end of Vancouver Island. Lita and I left on Thursday from Kenmore Air on Lake Washington. We flew in an Otter float plane that is one of the fleet of 10 the airline owns. These planes, and the other Kenmore planes were built by the De Havilland aircraft company which was founded in 1920. The planes are now some 65 years old and still flying. They are, of course,, well-maintained and with new motors. There is a 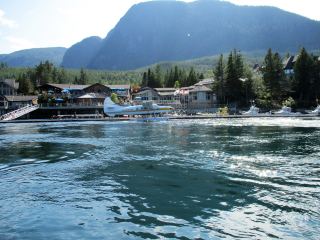 regularly scheduled flight to and from Kenmore to the resort. The flight takes approximately two hours and lands right at the resort which is accessible only by air or water. There is a helicopter flight as well from Vancouver, Canada. Our children and their spouses joined us the day after we arrived and it was a wonderful experience. There were sixteen of us in the party.

This Relais & Chateaux luxury resort has multiple swimming pools, a full size indoor tennis court, a basketball court, an excellent menu with daily changes. There are multiple activities which include, in addition to guided salmon fishing, an indoor tennis court court and a putting green as well as virtual golf. There is a twelve seat cinema, a games room and a very lavish spa. There is helicopter fly fishing and connected activities. There are multiple eco-adventure tours which include grizzly bear watching and whale watching. Other activities include ocean kayaking and multiple trails for hiking. The scenery is spectacular. The tides in front of the resort can be 14 feet high which create some of the world's most impressive tidal rapids. These rapids can reach speeds of 20 knots and produce large whirlpools. There are abundant seals, seal lions and bald eagles as well as other wild life. We had orcas and even humpbacked whales come through the area. You see porpoises following the boats going out to fish. 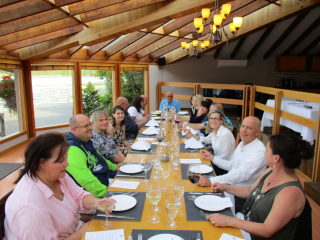 After we unpacked we had lunch. I went fishing while Lita went to the spa. I went out at about 2 o'clock and return at about 4:30 PM. The guide was someone Lita and I have fished with for several years and is very accommodating to my limited ability to stand and play a fish or even set the hook. The day was sunny and even warm. We were at a fishing area known as Denton Bay. Fishing was excellent. I caught and released four coho salmon. I also caught four Chinook 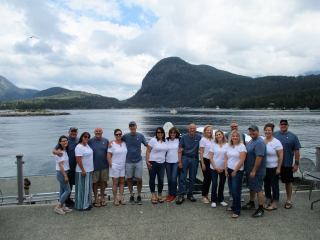 salmon and kept one. We had other fish on that we were unable to catch. The Chinook was bright and about 13 pounds. After resting and changing, we had the great dinner and went to bed.

The next morning Lita and I went fishing with a new guide, Cam McDonald. We had not fished with him before and he was excellent. That morning we fished in a new area that was about 20 minutes away. Fishing was slower but still excellent. At one point we each had fish on our fishing rods at the same time. We caught and released fish, but we kept one Chinook salmon. At noon we returned to the Lodge for lunch and that afternoon we fished another area with slower fishing but still caught fish.

The children were scheduled to arrive at about noon on Friday. Unfortunately, there was a software failure that impacted all of the airlines using it and which prevented the required passport information to be sent to Homeland Security as required by law. As a result no international flights could leave that were dependent upon this service. Having arrived in the early morning hours, the children were forced to wait until late afternoon before they could leave when the repair was completed. They didn't arrive until about 4:30 in the afternoon. Lita had arranged a family dinner in a separate room for us. It was delightful and we were well taken care of. 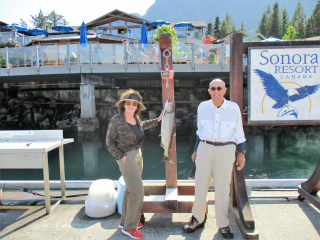 There was a lot of laughing and noise along with excellent food.

Over the next couple of days they took full advantage of the facility and in the evening we had a family dinner. Everyone caught a salmon who fished and enjoyed the experience. The spa was well used and people enjoyed all the activities. The weather was great. No rain and while overcast in the morning the sun was out in the afternoon. Even though Kenmore 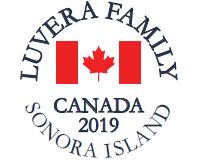 limits each passenger to a carry on weighing no more than 25 lbs the resort provides full rain gear and boots plus any other accessory needed for activities. We didn't need any rain protection and it was very pleasant weather. We had a wonderful family trip.

Lita had ordered men's and women's tee shirts from LL Bean before we left for everyone. The tee shirts had a small embroidered patch with "Luvera Family Sonora Island Canada 2019" and we took a family photo wearing them on the last day.

Lita and I left on a noon flight back to Seattle. The children left that afternoon. Great trip which I'm thankful we took. Hopefully we'll do it again next year.