On Wednesday of this week President Donald Trump sat in the oval office holding up a map which he claimed confirmed his earlier assertion that Alabama was in the path of Hurricane Dorian even though the National Weather and Service had immediately denied his statement saying: "Alabama will NOT see any impacts from Dorian." Worse, the map he displayed had obviously been doctored by adding a felt tip line extending the official storm path so it now went into Alabama. Instead of admitting the obvious misstatement he had made, he instead 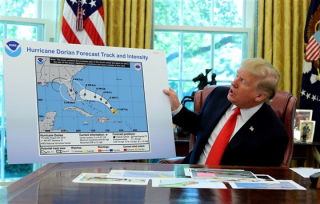 dug in his heels and offered doctored evidence to justify it. Social media quickly labeled it "sharpiegate" after the Sharpie felt tip pen company product. On social media people mockingly suggested the president might use his Sharpie felt tip pen to add the wall on the Mexican border or use felt tip stick figures to prove his disputed claim about the number of people at his inaugural. Commentators generally characterized his use of the altered map as "just so obviously ridiculous."

Why are all of us reluctant to admit we made a mistake? In the book Mistakes Were Made (But Not by Me): Why We Justify Foolish Beliefs Bad Decisions and Hurtful Acts the authors suggest that the psychological phenomenon of cognitive dissonance is to blame. This occurs when we hold certain opinions or values and are confronted with conflicting facts. Our reaction is to find reasons to reject the facts and continue with our present belief. There are other factors involved including issues as to how significant the mistake was and people not wanting to be wrong because it makes us appear less-than-perfect. We tend to view mistakes and apologies as a sign of weak character while in fact they require strength.

Certainly, we can understand that politicians have to be acutely aware of the significance of making mistakes and admitting them. Opponents will seize upon the acknowledged mistake and offered apology as a reason for the individual not to be elected to office. Presidential hopeful Joe Biden has had to deal with frequent gaffes on his part. However, an important aspect of evaluating the response to a mistake involves the significance of the issue and the mistake that was made. Acknowledging an mistake like this has minimal importance politically. This president is however unique regarding a lack of basic honesty and truthfulness which are defects of character. President Trumps lack of truthfulness stands apart from any other president in recent memory. No other president has had the media and other fact finding organizations maintaining ongoing tallies of the number of proven lies by a President of the United States and his refusal to admit he was wrong.

Against that backdrop however, is the fact that the most offensive aspect of the president's conduct was the enormous importance of people suffering from and in danger from this record storm while he instead was concentrated on trying to cover up his mistake rather than simply acknowledging it and moving on. That moral choice is a clear and significant reflection on the lack of his moral code, ethics and honesty. Many of his supporters have been quick to brush this aside as insignificant. Those supporters rationalization is consistent with the psychological concept of cognitive dissonance – the difficulty in abandoning one's previous views in the face of conflicting evidence. Here, however, the most glaring fact is his use of such a obviously altered document to avoid having to concede a somewhat insignificant misstatement. In my view his choice to have done so is a clear reflection on his narcissistic ego and his absence of a moral or ethical code about the importance of truth.

Perhaps my view is biased by what I like to claim was my mother's teaching on morals: "Son, never lie, never steal and never, never vote Republican."