We all know the extraordinary record regarding the crowd of people Donald Trump has selected for administration posts and praised as exceptionally qualified for the position only to fire them a short time later or have them resign.This never ending rotation of people first in his favor and shortly thereafter attacked by him as utterly unqualified and then totally contemptible reminds me of Shakespeare's play of Henry VIII. There is the famous speech of Wolsey about his downfall from favor which seems to me to capture the picture so accurately. Shakespeare writes the scene this way:

"So farewell to the little good you bear me. Farewell! a long farewell, to all my greatness! This is the state of man: to-day he puts forth The tender leaves of hopes; to-morrow blossoms, And bears his blushing honours thick upon him; The third day comes a frost, a killing frost, And, when he thinks, good easy man, full surely His greatness is a-ripening, nips his root, And then he falls, as I do

I have ventured, Like little wanton boys that swim on bladders, This many summers in a sea of glory, But far beyond my depth: my high-blown pride At length broke under me and now has left me, Weary and old with service, to the mercy Of a rude stream, that must for ever hide me. Vain pomp and glory of this world, I hate ye: I feel my heart new open'd. O, how wretched Is that poor man that hangs on princes' favours! There is, betwixt that smile we would aspire to, That sweet aspect of princes, and their ruin, More pangs and fears than wars or women have: And when he falls, he falls like Lucifer, Never to hope again."

When he tells blatant lies and makes totally false statements, which occurs virtually daily, I am reminded of a couple of well known movie scenes. One line about lies from a movie is still used by comedians today. It's from the 1933 movie “Duck Soup” starring the Marx brothers. Chico Marx was playing the character Chicolini. This exchange occurred between the actress Margaret Dumont playing Mrs. Gloria Teasdale and Chico Marx:

"Teasdale: Your Excellency, I thought you left.

Chicolini: Oh no. I no leave.

Teasdale: But I saw you with my own eyes.

Chicolini: Well, who ya gonna believe me or your own eyes?"

That's Donald Trump's classic position when caught in a flagrant lie or totally wrong claim. "Who you going to believe, me or your lying eyes and the fake news?" 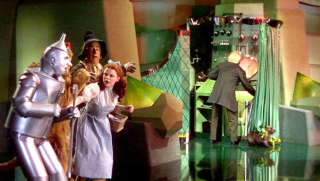 There is a second movie with a scene that illustrates Trump's refusal to concede he has made a flat out false statement or claim. It's from the wonderful 1939 movie The Wizard of OZ produced by Metro-Golden-Mayer. Dorothy is swept away by a tornado to the magical land of OZ and works to get back home. Dorothy and her dog Toto, accompanied by the Tin Man, The Scarecrow and the Cowardly Lion, set out to OZ to get the help of the great and wonderful wizard, played by actor Frank Morgan. They make their way to the throne room and the Wizard refuses to help, ordering to leave. While there are lights flashing and the wizard loudly ordering to leave, the dog, Toto, goes to a curtain and pulls it back with his teeth exposing an ordinary man manipulating switches to appear like a wizard. When he realizes the dog has exposed him as a fake, he says to Dorothy and her friends "Pay no attention to that man behind the curtain. I am the great and powerful …" Dorothy says "You are? I don't believe you." The scarecrow says "You humbug" and the wizard admits "Yes. Exactly so. I'm a humbug."  What a powerful and accurate description of Donald Trump and his conduct as president.

My last observation is the "Narcissist's Prayer" cartoon which needs no discussion or explanation: