Last Thursday, November 21, we flew from Seattle to Cabo, Mexico to stay at the luxury five-star hotel, the One and Only La Paimilla. While we had to get up early, our trip through security and the flight itself was relatively painless. That may be because with my limited walking ability we are now using a 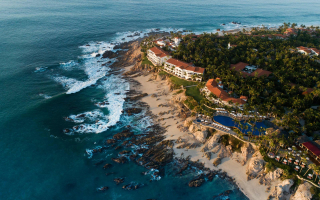 wheelchair for me which seems to facilitate the process. We flew Alaska airlines and were met by hotel representatives who drove us the twenty minute drive to the hotel.

The original hotel has been at this location for many years. We begin coming to this part of Mexico probably 30 years ago and have stayed at this hotel several times. However, it has undergone a significant amount of renovation since we first stayed there. It now is a vegetation shrouded ultra luxury hotel located on Pelican Beach. It is a secluded location but is only a 15 minute drive from the town of San Jose Del Cabo. It is a 30 minute drive from the airport. The hotel has two beautiful pools, with an infinity pool, waterfall and swim up bar. It features an upscale steakhouse and a more casual but beautiful restaurant open to the outside and with a fantastic view. As you might expect it has a spa, a gym, tennis courts and a Jack Nicholas golf course. There is free Wi-Fi and yacht charters are available through the hotel as well. One unusual feature is that it has a small hilltop chapel which is operated as a mission by the diocese. Mass is held there every Sunday at 9 AM.

Clearly this is one of Mexico's more luxurious hotels and resorts. There are 175 rooms as well as villas. Many the have their own private pools. 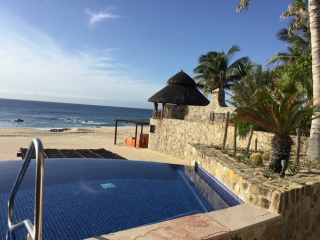 The beach where the hotel is located is one of the few in the area where swimming is possible in the ocean.

Lita had decided we should stay in one of the large suites just above the beach since it had a large pool and we would be able to spend time there. The unit had a large living room space, a large bedroom area with both an outdoor and indoor shower. There was a hot tub and we were assigned a butler for any of our needs. That turned out to be very convenient since the butler was able to drive us in a golf cart anywhere we wanted to go when we requested it. He was also able to take care of any of our needs. Actually, there were two butlers one for the daytime and one for the evening hours. That was a luxury.

Once again, we both over packed. Since we spent most of our time enjoying the room in the comfort of the pool and hot we didn't need a lot of clothes as a T-shirt and swim suit were adequate most of the time. We were at the resort from Thursday until our departure on Monday, November 25th. We had some meals in the room and we also enjoyed the two restaurants as well. Our view of the ocean allowed us to see whale moving through. We also witnessed the strange behavior of Dorado fish that would jump high out of the water as if to escape some pursuing fellow water creature. We watched the early rising fishermen leave in a small fleet of boats for fishing while we enjoyed coffee at 7 AM in the morning. The sunrises were spectacular. The weather was warm but not hot. It was in fact perfect weather. On Sunday we attended Mass at the Chapel. The priest spoke less than perfect English but we found it to be inspiring. There were probably 25 people there and and we surmise that a number of them were people who owned villas on the property and were staying there for the season.

On Monday morning we packed our suitcases and said goodbye returning to the airport. At the airport we were fortunate to have a young man who was pushing me in the wheelchair to take us to the airplane. He was able to get us through security and customs with relative ease. We boarded an American flight to Phoenix Arizona. We had arranged a driver there to pick us up and drive us to our home in North Scottsdale at Desert Highlands community. We will be here through Thanksgiving and fly home on Saturday. Unfortunately, the weather prediction is for a downpour of rain starting Wednesday night and through Thanksgiving with some rain into Friday as well. We are meeting Lita's sister Barbara and her son Damon for Thanksgiving. Alex Kairis and his wife Kelsey live near our Arizona home while she is attends osteopathic school. They are not here at Thanksgiving in won't be able to join us.

The flight home on Saturday is truly a luxury since we have chartered a small jet from Seattle that lands at the North Scottsdale airport which is 20 minutes from our home. On the return flight it lands at the Tacoma Narrows Airport with a 15 minute drive to our home.

So far are vacation has been relaxing and enjoyable. However, when we get home we are faced with a number of projects including addressing and mailing Christmas cards, end of the year charity designations and all of the usual activities around Christmas. I'll be glad to see the dog Valentino and simply to enjoy our house in Gig Harbor with its view of Vashon Island.