Someone has said: "coincidence is God's way of being anonymous." Brett Lunsford, who is the director of the Anacortes Museum, recently sent me a photo of my mother and I standing next to a 1953 Chevrolet Bel Air car. That car is connected to my living in Gig Harbor Washington and the role of fate in my life. The connection involves being born and raised in Anacortes and ending up in Gig Harbor.

After graduating from Gonzaga law school in Spokane we moved to Mount Vernon where I had obtained a job working as a deputy prosecuting attorney. 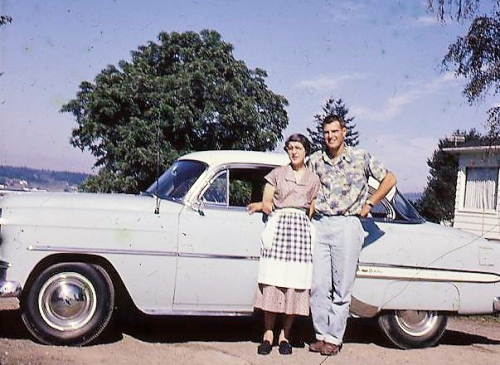 After three years there and several in a partnership I opened my own law firm in Mount Vernon. Over time my law practice involved more major and significant cases resulting in going to SeaTac to fly around the country on our cases. We also opened an additional law firm in Seattle. We were spending more time in Seattle. As a result, in 1983, Lita and I  bought a condominium in Seattle to spend time there and avoid all the travel. For the next 30 years we owned condominiums in Seattle where we would spend several days a week. Eventually, we decided to move to the Seattle area since we were spending most of our time there practicing law. When we were unable to find saltwater front property in the immediate Seattle area, we began looking elsewhere. Lita located eight acres with extensive beachfront in Gig Harbor. We decided to buy it and build a home there. For the last twenty three years we have been Gig Harbor residents.

The connection between the car and Gig Harbor involves the fact that I had been spending my summers from the ninth grade working on the salmon boats each summer. When school would get out in the Spring I would leave on a fishing boat for Alaska. This was before there were area restrictions for fishing. As a result we sail to Alaska where we could fish anywhere. We would sometimes go as far as the Aleutian Islands, move down to Kodiak or Southeast Alaska for fishing. We would then come back to Puget Sound and fish until fall when school would start.

The work was hard. When I started fishing, the boats used cotton nets which had to be tarred to preserve their shape and keep them from rotting. Part of the cew's job, before leaving, would be to soak the nets in hot tar, then wring the net through rollers and spread it out in a field to dry. As a crew member on fishing boats I was involved in doing that in Anacortes where we tarred the net and spread it out on a field near where the Guemes Island ferry dock is now located. Crew members were also expected to know how to "hang the nets" which involved a process of tying the net to a rope with the floating corks. There was a skill in knowing how to do this right.  We also were expected to know how to repair or mend the nets with torn areas. I was rather good at this process using a wooden needle with thread.

The Gig Harbor connection involves a John Stanich, a Croatian captain of a purse seine salmon fishing boat who lived in Gig Harbor. John Stanich was one of four children whose parents were born in Dubrovnik, Croatia. His parents moved to Gig Harbor in 1910. His father built a home and net shed on the waterfront in Gig Harbor. He built a purse seine fishing boat at the Skansie shipyard in 1920. The vessel was named "Welcome." Both the net shed and the shipyard exist Gig Harbor today as historical sites. John's father purchased property next to his home and net shed in 1924 where he built the Stanich Grocery Store. John's oldest brother Tony manage the grocery store and John, who had been fishing since he was 16 years old, took over the job of operating the Welcome in 1920 after his father retired. John skippered that fishing vessel for over 50 years.

The Stanich Store served the commercial fleet supplying groceries on credit at the beginning of each busy fishing season with family members helping in the store as needed. The store offered credit to customers and in particular to the fishing fleet from Gig Harbor who they counted on paying their bill at the end of a successful fishing season. Our family operated a similar family grocery store in Anacortes. Our family also provided groceries to the majority of fleet of purse seine fishing boats during the Puget Sound fishing season. Like the Stanich family store, our family grocery store also offered credit to the fishing fleet. Dad and John were friends because of this connection and John always bought his groceries from the "Luvera Market." Because of their friendship I was hired by John in 1954 to work on the Welcome as a "skiff man."

Crew members were paid by sharing a percentage of the net profit at the end of the fishing season. The expenses, including the cost of food, fuel and other expenses,  would be calculated. The net profit would be divided on a percentage basis. The captain took a major percentage, other calculations were made and the crew was paid an equal percentage. If fishing was good, you were well paid. If fishing was bad, you didn't get paid much or even the possibility of not being paid at all because there wasn't enough to cover expenses.

In 1954, however, there was a major run of sockeye salmon in Puget Sound. John Stanich and the Gig Harbor fishing fleet were experts at fishing at a location in San Juan Island known as "the salmon banks." It turned out to be one area with abundant sockeye and we had a very successful fishing season. In fact, it was the best of my fishing career which extended from high school through college. That year I earned enough to buy a one year old Chevrolet Bel Air automobile and have enough additional money left over to cover college.

The picture was taken after I bought the car. I was very proud of it and mother and I were posing in front of it. It was all because of a Gig Harbor fishing boat I had worked on that summer.  In 1954 I had no idea that I would end up living in Gig Harbor where the Welcome was berthed. It it wasn't for John and his Gig Harbor fishing boat I wouldn't have earned  enough to own that car or pay for college. Life has strange coincidences and this is one I'm thankful for.

John died in 1974 and his boat the Welcome was sold the following year. It sank near Foulweather Bluff in 1978.