Today is the anniversary of the death of my father, Paul Nicholas Luvera Sr. Born on March 25, 1898, he died in Anacortes, Washington on November 4, 1990 at the age of 92. I've published details of his extraordinary life many times. See https://www.paulluverajournalonline.com/weblog/2013/11/dad-1.html for a complete history of his life.

Dad was born in Reggio Calabria, Italy, the son of Niccola and Fillippa Luvera. His father and oldest brother left for Canada where they worked for the Canadian Pacific Railroad installing tracks until they earned enough to send for his mother, oldest sister Janet and dad in 1910. They moved to Coleman, Alberta where he and his father worked in coal mines, then to Anacortes in 1918. At that time Anacortes was a small town with four sawmills, six shingle mills, six salmon canneries and two codfish plants. My grandfather got a job as a section hand for the Great Northern Railroad company working on the railroad tracks with other laborers. Dad found work with the Morrison Mill company in the boiler room feeding the furnace. It was a hot and miserable job. After fifteen days he was able to find a new job at Anderson Shingle mill stacking shingles for the dry kiln. Then, after working there some time, he was able to find a "white collar" job working for a local Italian grocer, as a delivery man working six days a week 7 am to 6 PM. Dad decided he could run a grocery store with his father.

Using their small savings and a loan from a Grocery wholesale house they leased space and opened a store in 1922 at 7th and Commercial in Anacortes he named "Luvera’s Fruit Store." Everyone in the family was involved. Dad’s sister was a clerk in the store. His father quit his job in the saw mill to run the fruit and create a daily vegetable display. Dad's mother also helped out. This small grocery store featured home delivery complete with putting the groceries on the shelves at the customer’s home if they requested. Credit was given and people could phone in their orders for delivery to their home. There was a fresh meat market with a butcher shop in the back of the store. Store products stacked high to the ceiling. A long wooden handle with grasping tongs was needed 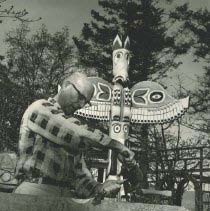 to reach those items. Huge wheels of cheese were on display from which slices would be cut to the customer's specifications. Fresh coffee was ground from beans in a larger coffee grinder. The front of the store along the sidewalk had a large colorful vegetable display created by my grandfather who worked at the store well into his eighties.To promote business, drawings were held for grocery prizes and dozens of people would show up for the drawings. Times were tough. The black and white photos of that time show huge crowds of people gathered outside the store waiting for the winning ticket to be drawn and prizes to be given. The struggling store survived. Dad met my mother, Mary Babarovich, in Anacortes. They were married in 1926.

The mainstay of the store economy was the commercial fishing fleet. Literally hundreds of commercial purse seine boats would come into Anacortes docks during the summer fishing season. Most were Croatian’s and since mother could fluently speak the language this was a big drawing card for the boat cooks many of whom spoke only limited English. Dad gave the boat owners credit for the season and they would pay off the bill from the summer earnings at end of the season. Not all seasons were successful and some accounts were carried for more then one season. But dad said they never lost a dime even though some took several years to pay.

Mother and dad spent sixty four years together until Dad’s death in 1990. While neither achieved more then a 6th grade education they impressed upon my two sisters and me the need for an education. There was never any doubt we were going to college. Any money we earned was always earmarked "for college" and it was driven home to us that education was the key to success in the United States. In fact all three of us children 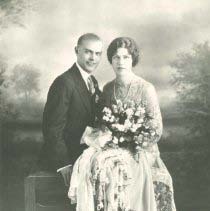 a college education. My two sisters were always outstanding students and achieved college degrees with scholastic awards. In my case, dad was very pleased that I graduated from high school since I as always far more interested in athletics than grades. He was particularly pleased when I graduated from law school.

In his retirement, dad started a second career as a wood carver. Among his many wood creations, his totem poles were very popular. He carved many poles during his retirement and his totem poles are displayed in such places as Rotterdam, the Netherlands, Yokohama, Japan and Stockholm, Sweden. His totem pole carving resulted in his self published book, How to Carve Totem Poles. It was self published with his savings after being rejected repeatedly by publishers. Dad was very active in community service for his entire life in Anacortes. This unique man, whose education never got past the 6th grade, was elected to the Washington State Senate and was responsible for securing the construction of a new highway into Anacortes because the existing one often flooded.

Many years later and after his retirement, the state legislature designated that highway as the Paul Luvera Sr. Highway. He was very proud of becoming a United States Citizen and flew the American flag at his house daily. He believed this was the greatest country in the world and taught us children that we owed a duty of contributing back to this wonderful country.

He was a truly amazing story of the American dream who arrived with nothing, had only a grade school education and achieved so much for his family and his community. Here's to you dad, rest in peace.