grandmother should. She Nonna spoke no English and was a wonderful cook who was always feeding us children something whenever we visited. I've written about her before: https://paulluverajournalonline.com/weblog/2013/12/phyllis-flippa-luvera-1870-1946.html.htm

ELIZABETH "BETTY" BARNETT 1910 -1985 Betty Barnett was my wife Lita's mother who died December 20, 1985. I've written about this remarkable woman many times. See https://paulluverajournalonline.com/weblog/2013/12/my-mother-in-law-elizabeth-barnett-1910-1995.html It was my privilege to have known her. She was extraordinary in so many ways. She was very intelligent, wise and a great judge of people. I loved her like my own mother for her many qualities and her understanding.This is a woman who attended Holy Names in Spokane where she was taught proper table settings, good maners and social skills.

She met Hollis Barnett when he was attending Gonzaga and after they married he took this refined lady to Rainer National Park where he ran a small gas station. they lived in a small attic area above the gas station. Later they built and operated the Gateway Inn at the enterance to the park. Their marriage 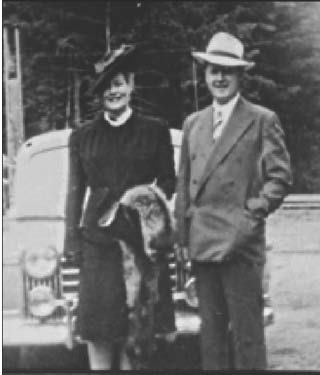 lasted over fifty years and produced son Hollis and daughters Barbara, Monica and Lita. Their story is unique. Betty had many accomplishments and she loved poetry and literature. One of her favorite poems, which I read at her funeral, was by Sam Walter Foss The House by the Side of the Road The poem concludes with words that I always felt represented how she felt about her fellow neighbor:

In addition to loving poetry, whe wrote some herself. On of her poems is this untitled one that I like a lot. So, here's to this wonderful woman who made the world a better place by having lived here: "The snow floats gently on my roof tonight from mountain clouds of high, while stepping gently past my door the gentle deer goes by.The firelight flickers in this country inn, the pictures look down from the wall; the conviction is strong, but mournful too, each child must answer his call.Time rushes on severing the span of youth. Was it yesterday one of them said ‘if I say my prayers and brush my teeth, could I maybe sleep in your bed?’From memory;’s halls of yester years a hollow echo rings; The pictures smile and prove again, Life and youth are born on wings.My fire is low and I hear the song lilting round a mountain high; Where the fir’s dark shadows paint the ground with a refrain pastel and shy.If walking tall through life’s circuitous path along the horizons rim; You smile as you meet each stranger’s wrath , the shadows of life will be dim"

Also, Nick Petrish died in Anacortes on December 19, 2011. We had a long friendship. We went from grade school through high school together.We worked together from 1977 until his illness in 2011. He was a friend and a good man. I've written about him previously: https://paulluverajournalonline.com/weblog/2012/12/nicholas-petrish-dec-19-2011.html.html