Retired Pope Benedict is at it again, undermining the authority of Pope Francis. Now he has co-authored new book “From the Depths of Our Hearts: Priesthood, Celibacy and the Crisis of the Catholic Church," along with his fellow conservative, Cardinal Robert Sarah, who heads the Vatican's liturgy office and has been a critic of Pope Francis. The book strongly reaffirms priestly celibacy which is in direct conflict with Pope Francis who wants the policy discussed and re-examined. It is a  public attempt by the former pope to sway thinking on the  matter. Benedict’s intervention is extraordinary, given he had promised to remain “hidden from the world” when he retired in 2013, and pledged his obedience to the new pope. Yet he has continued to voice opposition to Francis ideas and to support traditionalist who oppose Francis. 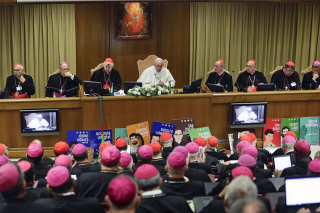 His latest violation of his promise to remain in the background lends support to the current opposition to Francis by conservatives and traditionalists. This group is nostalgic for Benedict's orthodoxy, some of whom even consider his resignation illegitimate. It is likely to fuel renewed anxiety about the wisdom of Benedict's decision to call himself “emeritus pope," rather than merely a retired bishop, and the unprecedented situation he created by deciding to live in the Vatican gardens and wear the white cassock of the papacy.

Conservative groups have jointed in attacking Francis on the issue of discussing married priests. For example,  LifeSiteNews – https://www.lifesitenews.com is circulating a petition asking Catholics to join in opposing Francis re-examining the policy of celibacy. Like other groups doing the same, this organization is a far right wing biased group which always favors evangelical Christianity positions.

What is being ignored by these traditionalists is that it is undisputed Peter, who was personally selected by Jesus to be the lead disciple, clearly was married. We know for certain that Peter was married because he had a mother-in-law (Matthew 8:14). In addition, the apostle Paul, who was not married, asked the Corinthians whether he also did not have the right to take a believing wife (1 Corinthians 9:5), as did “the other apostles and the Lord’s brothers and Cephas [Peter].” From this, we can assume that Peter was not the only apostle and follower Jesus selected to have a wife. Clearly Jesus did not require celibacy to be his disciple.

Last year a CBS News poll found that nearly 70% of American Catholics supported allowing married priests. In spite of that fact the conservatives oppose even talking about it. The problem with the hysterical opposition to even discussing the celibacy policy is that it is not a moral commandment of Jesus or the Catholic Church. Jesus didn’t require his disciples to be unmarried. In the original church celibacy wasn't required for disciples. Celibacy is merely a policy adopted very late in it's history. It is a policy of the Church that can be changed like the previous practice of no meat on Friday was changed. The fact is the Church was a thousand years old before it definitively took a stand in favor of celibacy in the twelfth century at the Second Lateran Council held in 1139 and in 1563, the Council of Trent reaffirmed the tradition of celibacy. However, priests and even popes still continued to marry and have children for several hundred years after that date. In fact, the Eastern Catholic Church still has married priests. There is no divine commandment against married priests. It is a matter of church policy choice. Given the situation in the Church today Francis has asked bishops to explore the issue. Opponents who insist on their point of view – pre Vatican II may disagree but they have no moral rule or definitive commandment to rely upon. Their conduct has been one of disobedience and attack on Francis to try to undermine the legitimate Pope. Their public comments and actions are a personal attack on the only Pope in authority – Francis.

Pope Francis wants the issue of married priests explored. Retired Benedict and his group of followers are opposed to even talking about it. They want the Church to remain like it was half a century ago even though our world has had enormous change that demands examination. They are unwilling to have open theological and policy discussion about it. It's their way or the highway. I fail to understand how they can consider their conduct good Catholic and Christian conduct.