At 86 years of age I have some childhood  memories of growing up in Anacortes Washington. Memories that have no particular significance but which have stayed with me. For example, when I was a youngster, Anacortes had a large commercial salmon fishing fleet. The skippers of the purse seine boats used cotton nets which had to be tarred for preservation during the fishing season. Later the cotton nets were replaced with Nylon that did not need treatment. There was a large field near the water at sixth and K St. in Anacortes where the fishermen would set up a heated tar stove and would heat the tar so it could be applied to the fishing nets. After applying the tar, the nets would be spread out on the field to dry. The smell of the tar was strong and the work resulted in tar on the workers. From there the nets would be moved to the fishing boats where they would be piled  on the stern of the boat. When I began working on the fishing boats in the summer I found that the tar would 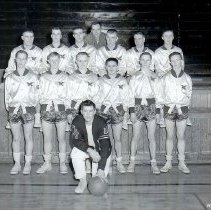 get on you in the hot weather.

We lived in a house at 2102 9th Street in Anacortes. It was located  on a high bank above the Sebastain-Stuart Fish Company cannery in Guemes channel below. Near our house was a empty field at the end of eighth Street. My friend Pat Malloy, who died in Thailand where he had moved, lived just across the street from the field. My other friend Matt Brown lived a couple of blocks up the street. The field was a place where neighborhood children played and where we had neighborhood baseball games. The field was in the shape of a triangle with the end of the field dropping off to the water below. We played baseball on the field. The hazard was hitting the ball too far and having it lost over the far end of the field and down the slope to the water. Hitting the ball too far to water side meant that it ended up in the brush and down the bank on the water side.  On the other side of the field was the Hensler Estate which had multiple trees and bushes where the ball could be lost. We probably spent as much time searching for the ball as we did playing baseball. Even though we played with a softball we lost fair number of them.

Dad had a talent for carpentry even though he operated a family grocery store by profession. In his retirement he was known for his totem pole and other carving skills. He and mother were busy operating our family grocery store. Yet, when I was in the 6th or 7th grade somehow he found the time to build an eight foot plywood skiff and paint it green as a gift for me.  We moved it to the beach near the state ferry dock about a mile or more from our house where we chained it to a log. It was a time before rampant theft and it remained stored there safely for several summers. The family dog was a Cocker spaniel named Sally. In the summer, Sally and I would take the steps dad had built from our house down the bank to the railroad tracks along the water and beach below our house. Carrying the oars for the skiff over my shoulder, Sally and I would walk the railroad tracks to the place where the boat was kept. I would launch the skiff at the beach and Sally would hop in with me. Together we would row along the water where there were multiple fish canneries and docks exploring or fishing.  We also would take a fishing rod and salmon fish in Guemes Channel. We spent a lot of time in that skiff. I also frequently rowed across the channel, about one and a half miles, to the beach at Guemes Island across from us. I’d beach the boat and Sally and I would get out to explore the area together. On one trip, Sally went exploring alone and did not come back in spite of my calling her. I was frantic until, after she was through exploring, she decided to come back.

It was not uncommon for me to also just row across the Channel to Guemes and turn around to row back just for the experience,. Sometimes I would cross several times without stopping.  On one occasion when I had done that and pulled the boat up on the Anacortes side beach, a man called to me who was standing by his car in a line waiting to get on the next ferry. He leaned over the rail

on the dock and talked to me for some time about my rowing. He asked me how old I was and said that he was the rowing coach at the University of Washington. He said that if I attended college I should go to the University of Washington and sign up for the crew team.  I later found out that he was Al Ulbrickson who was the famous crew coach at the University of Washington.  His family had a vacation house on one of the San Juan Islands and frequently took the ferry to get there. When I did attend the University of Washington, after my high school graduation in 1953 on a basketball and football scholarship,  I did go to the the crew house where the shells and crew were located. I was fortunate enough to find George Pocock, the famous builder of the shells used in rowing, there. He was patient enough to talk to me about rowing. Pocock had been featured in Daniel James Brown’s best-selling book “Boys in The Boat.” After talking to him I decided that in addition to basketball I would sign up for the freshman crew team. The training was at a different time than basketball.  The training consisted of being on a barge equipped with rowing chairs. Along with other potential crewmembers you rowed this heavy barge around. At the same time I was doing this, I was also turning out for the freshman basketball  team. I quickly learned how really difficult and what hard work it is to row. Especially A heavy barge and before long decided to drop out. I did however make the starting basketball team and letter in football as well, but I had a new appreciation for members of the crew team.

When I was in grade school Dad also built a small one room building on the edge of our property located on the edge of the bank going down to the water. It was very small, but had bunk beds, a woodstove and he even built a trapdoor (he called a “secret door”) in one corner. Our family called it “the shack.” At the time I did not appreciate the amount of work and effort he put into building the structure with a roof, siding and windows. It was a place for me to have secret things and hid out with my friends. It was really special. My regret is I didn’t fully appreciate the effort that went into it for me he had made in building it. After I left home it became a storage area for garden and other supplies.

When I was in grade school, Anacortes was a basketball town. When the basketball team played out of town on Friday night, the Anacortes downtown virtually shut down because the people left to attend the game in another town. There would be a parade of school buses of students and cars full of fans all heading to the town where the game was to be played.  We had winning teams and the town was fully engaged. Our Anacortes high school gymnasium was not large but always full for the games. The gymnasium was not only full,  there were people standing on the sidelines in the corners watching as well. Even the basketball turnouts before games had spectators who came to watch turnout. It was very much like the 1986 movie Hoosiers starring Gene Hackman. The town was a true basketball town. As a result, from my childhood I was a basketball fan and my heroes were the players on the Anacortes basketball team. Dad installed basketball hoop above the garage with an outdoor light. I spent many hours practicing my basketball skills. My friend Pat Malloy had a uncle Bill Kasch who lived in Everett. I have forgotten how it originated, but somehow it was decided that his uncle would put together a basketball team of Everett grade school children and we would create one from Anacortes for a championship game. The parents of the students for both teams were involved. I can’t remember now who was responsible for our team, but an Anacortes high school student, Jack Hoskins, who graduated from Anacortes in 1948, agreed to be our coach. Our team was named the “termites.” Why I don’t recall, but I do recall that parents bought sleeveless underwear shirts for us and attached our name “Termites” to them somehow as our playing shirts.  The game was played, I think,  at the Anacortes gymnasium with parents present. I don’t remember who won the game. I do remember it was a lot of fun.

I turned out for the basketball team in junior high school, but mostly set on the bench. The high school basketball coach was Bill Taylor, to whom I owe an enormous debt for the guidance he gave me in encouraging me to practice more and keep trying. I did make the high school basketball team and was captain of the team my senior year. I’m still in touch with one of the team members, Larry Lunsford, whose nephew is responsible for the Anacortes historical Museum, Bret Lunsford.

Not very headline making information, but it was fun to remember it.

2 thoughts on “CHILDHOOD MEMORIES of ANACORTES”