There are some specific events in my life which have played a significant role in how my life has been lived. In addition to having the extraordinary parents I had and the great variety of things which  I didn’t earn  but were gifts, some events were of particular importance. My high school basketball coach, William Taylor, was a huge influence for teaching me character and moral conduct. The priest at Newman Club at the University of Washington, Fr. William Dooley gave me moral direction. Certainly, my participation at the Spence Trial College and friendship with Gerry Spence was significant in my legal career. However, my involvement in working on salmon purse seine boat had a profound effect on me and growing in maturity. From the time I was in the ninth grade through college I worked each summer on purse seine boats. The usual season involved leaving for Alaska to fish at the end of May and returning in mid June to fish in the Sound until school began in September.

I’ve written on several past occasions about my experience working on salmon purse seine fishing boats. Our family grocery store was  significantly dependent upon the fishing fleet in Anacortes trading at our 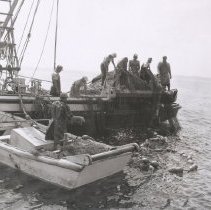 family grocery store. Each summer the fishing fleet in Anacortes would leave for fishing in Alaska. They would buy groceries for the time they were in Alaska. The fleet would return after several weeks of fishing in Alaska to fish in the San Juan Islands. Each week they returned to Anacortes for the weekend and would buy groceries for the following week of fishing. The great majority of the fishing boats traded at our grocery store in Anacortes. See my description of this annual event at: https://paulluverajournalonline.com/weblog/2013/12/luveras-grocery-store-salmon-fishing-in-anacortes

I’ve written about my experience fishing generally See https://paulluverajournalonline.com/weblog/2008/05/purse-seine-fis The benefit from fishing came from the experience and from my relationship with the men on the crew. When I began fishing there were seven or more crew. Usually all of them were older mature men with one or two young crew,  like me, who usually worked on the skiff. These were close quarters for eating and sleeping. You learned to live with older men who worked hard and were experienced in many years of fishing.  While many were from Yugoslavia and lacking in formal education, they had a lot to teach about wisdom, hard work as well as maturity. As a result,  I consider my years on the fishing boats more important than my college education. With regard to learning about relationship with people, there is nothing more significant in my life than living with the crew for many weeks on those boats.

For more information about the experience of working on a salmon purse seine boat I recommend a couple of  books. Gary Keister and I were brought up in Anacortes where we both were involved in salmon purse seine fishing. Gary became a skipper of a purse seine boat at an early age and has written a book about it. See “Along the Cork Line” available from Amazon.  https://paulluverajournalonline.com/weblog/2011/12/purse-seine-fishing-a-book-by-gary-keister

Gary lives in Port Townsend and we have been friends since our Anacortes days. Gary was an outstanding basketball player in high school and college who obtained a JD degree at Gonzaga. He was brought up by his widowed mother. When the two of us were growing up, commercial salmon fishing in Puget Sound was a major industry. Each summer we would commercially fish in Puget Sound and Alaska. His grandfather operated the fishing boat Veribus and Gary began fishing with his grandfather when he was only eight years old. His duties involved washing dishes and cleaning up after the crew. I recommend the book.

In 1958 captain Nick  Barhanovich of Everett  hired Ray Fadich to work as a skiffman on Barhanovich’s purse seiner, The Emancipator. Fadich had never worked on a seine boat and had little clue of what that fishing season would hold for him. As the newest member of the Emancipator s crew Fadich has written that he  had to deal with a steep learning curve, days of backbreaking physical labor, and the practical jokes and daily initiation into the brotherhood of the commercial fisherman that came with the territory. In this memoir of the 1958 sockeye fishing season aboard the fishing boat 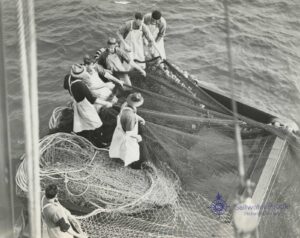 Emancipator, Ray Fadich describes in detail the experience in his book The Big Run, which is available from Amazon. I enjoyed the details he describes about fishing.

Several things Fadich writes about brought back memories of my fishing days. The phrase “Pull hard and it’ll come easy” may not be logical, but it was a common expression on fishing boats. He describes “plunging” – which involves thrusting a long pole with a cupped cap into the water where there is a gap between two nets to produce bubbles that would frighten salmon from tying to escape through the net gap.  The ability to skillfully repair a tear in the net with a “needle” of twine was a job asset as was the ability to know how to “hang” the net to the cork or lead line. I began fishing before Mario Puretic invented the Marco Power Block  – a hydraulic device that pulled net to the deck of the fishing boat. When I began fishing the nets were pulled strictly by manual labor. Even though there was a revolving device on the stern, it was largely ineffective as too low to be of any use especially in rough water where the stern roller would rise and fall with the waves. He writes about the crew in the skiff, like me, who usually had to hand pull the short net or “lead” into the skiff by hand, then return the skiff with  one end of the main net to the fishing boat. I would get out of the skiff  and climb on the  fishing boat where I would hand pull the cork line along one side of the boat which had accumulated as the net was brought together. From there I would go the stern where I would  stand with the other crew to pull the rest of the net onto the boat. That process was repeated each time a “set” was made when the net was released for fishing. I recalled all of this while reading his book and was reminded of what a gift that experience actually had been for me in growing up.

I didn’t know it at the time,  but this experience and hard physical labor was a gift of learning and maturity for which I am grateful.