In an Email to the children, I described the two dance halls in the county that were popular when I was in high school.  I thought later about the street dances in Anacortes. When I was working on the 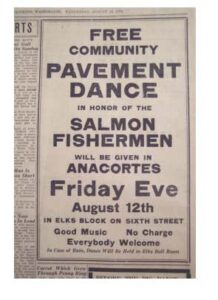 purse seine boats during high school,  Anacortes had fishermen “pavement dances” on the weekends during the fishing season. The dances were on Commercial Avenue. They were popular and crowded with people. The fisherman returned from fishing on the weekend and the population would swell by hundreds of men from the boats. On Friday nights the boats docked, and the men would go to the street dances, fill local bars and generally relax.

Music and dancing were popular before television and social media. All of the high schools had dances after the high school games. Anacortes had the local Elks and Eagles that provided adult music and dances. In addition, there were a lot of local, part time bands that played in bars and elsewhere in town and around the county.

In addition, there were popular weekend dance halls in the county during that period. One was the Seven Cedars  located on Riverside drive in Mount Vernon where the Safeway is now. It was once a dairy barn on farmland, later a roller rink and then a dance hall. Each Friday it featured bands and dancing. Admission was $1 a person. In addition to music and dancing you could buy snacks and mixer, but liquor was bringing your own bottle. Harry Lindbeck was the owner and the official name was Lindbeck’s Seven Cedars Dance Pavilion.

It was Lindbeck, an accordionist, who brought a then-little-known Lawrence Welk and his band to the Northwest in the early 1950s for $750. Louis Armstrong and other legends also performed at Lindbeck’s Seven Cedars Dance Pavilion. It opened in 1944 to an opening-night crowd of 2,000 people. He got people like Lawrence Welk, Louis Armstrong, Roy Acuff and  Guy Lombardo to come there and play.

The security consisted of one-off duty deputy sheriff,  Jess Willard, who was a huge man, and had a visible blackjack he carried. He wasn’t reluctant to use it to break up the fights in the parking lot. Inside, there were booths along the dance floor and  a stage for the band. The place would be packed, but there was as much activity in the parking lot as inside. The Seven Cedars story ended after nearly 20 years, when the hall burned in 1963.

The other dance hall was the Holiday Ballroom located about 4 miles North of Burlington on old Highway 99. It was a more refined place with weekend music and dancing. It was not as popular among high schoolers as the Seven Cedars. It also was destroyed by fire.  Highschool kids hung out at these places.