We are at the One and Only Palmilla resort at Los Cabos, Mexico. Los Cabos, "the capes," refers to the 20 mile long beach from San Jose del Cabo to Cabo San Lucas. This beautiful resort is on the beach about half way between the two locations. The tip of the Baja Peninsula is a point where the Pacific Ocean and the Sea of Cortez meet. The nearby town of San Jose Del Cabo has a very old Catholic Church, where we will go on Sunday, and many  shops where we have bought things for our Arizona house in the past. The 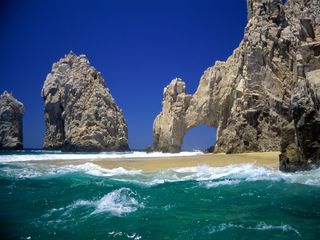 larger town of Cabo is in the opposite direction and too full of tourists for us.

Security clearance was easy because of the lack of passengers. Although, the man who was checking boarding passes before you get to the security machine must have been a former secret service agent because he studied the driver's license under a magnifying eye piece very carefully, then studied the license against our faces for a prolonged time and after that put the license in a device. Only after all of this, done very deliberately, did he reluctantly make a mark on our boarding pass to allow us to pass on to the Xray machine and security device where my artificial joints always set off the alarm. In spite of all of this, the record for Homeland Security has been "many are called, but few chosen." Our flight on Alaska was a 3 hour non stop flight, memorable for what Alaska no longer provides it's customers in the first class section and the adolescent, noisy brat in the seat in front, whose father sat immobile for the entire flight, ignoring the monster's behavior and with both seat backs pushed back against ours.

Our room is close to the water, has its own hot tub and small dip pool. I hesitate to admit that it also comes with its own butler. Jose is very nice young man who offers to help us unpack, leads us to the restaurant with a flashlight at night and otherwise reminds me of Dex in those yellow page ads who is always in the cupboard ready to assist. We unpacked ourselves and headed to the outdoor bar for our required Mexican cocktail, a Margarita. Sitting in the closing light we watched the Pelicans looking for their dinner. They fly slow with wings spread' circling until they see a fish in the water below. Then they fold their wings flat to their body, point their beak down, and drop like a rock. They hit the water with a loud splash. They go below the surface and end up with the fish. Quite a show.

We ate at the Market, the resort's main restaurant. Until two months ago it was Charlie Potter's of Chicago fame. In fact, about a year ago we were staying at the close by Rosewood four star Las Ventanas resort and came here for dinner. The restaurant owner,Charlie Potter, was visiting and sat with us for a considerable time talking. Our connection was that several years before  a very talented wine steward had left the Four Seasons in Seattle to work for him in Chicago. Shortly after he moved to Chicago, Lita and I were in Chicago and ate at his restaurant and talked with him. Now Charlie's is closed and a new restaurant opened in its place. The food was excellent, but they kept the music from the previous operation. It's disco – continuous and loud. Sorry, but when I come to Mexico and eat at a elegant restaurant I sure don't expect nor want disco dance music to accompany my dinner. In fact, I can't think of anywhere where I want loud disco music playing during my dinner.

We awoke this morning to the sounds of waves hitting the shore and a bright red sunrise. There must have been a dozen small open boats all along the edge of the beach. One man in the stern controlling a large outboard. One man in the front, standing, balancing himself against the roll of the boat from the waves and holding a throw net. The boats are maneuvered very close to the beach. The man with the net throws it out in a circle. The round net has weights on the bottom which sink it. There is a line attached to the net which is held until the net has sunk over any fish. Then it is pulled back trapping fish inside and dumped in the bottom of the skiff. The process is repeated while large rollers break on the shore and the skiff tips bow down and then the other way. But, the men with the nets keep their balance and the man running the outboard keeps the wave from driving the skiff unto the beach. All the boats do the same and repeat the process until the sun is up when the convoy of skiffs all leave to move on to other locations.

Our plan for today is to do nothing, relax, swim in the pool and ignore the stock market reports.