In February of 2005 Robert Kearns died at age 77. He was made famous by a movie about his 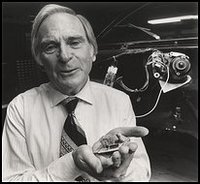 invention of the intermittent windshield wiper and his long legal battle for justice when the automotive industry used it without payment or acknowledgment. According to the 2008 movie Flash of Genius, staring  Greg Kinnear, the story really starts on his honeymoon. While trying to open a bottle of champagne he was struck in the eye by the flying cork and injured it. Years later while driving in the rain the constant movement of the wipers irritated his troubled eye. That caused him to think about the eye lid blinking every few second which led him to work on a windshield wiper that did the same thing. Working in his basement in Detroit he created an electronically driven invention that worked and which the automotive industry needed, but had not been able to develop themselves.

Kearns had been a high school athlete, was a talented violinist and worked in intelligence in the military. He earned engineering degrees from Wayne State and a doctorate from Case Institute of Technology (now Case Western Reserve University) He taught engineering at Wayne State, was married and had six children.

He obtained patents and presented his invention to the Ford Motor Company that had been working on a vacuum type of wiper without success. Ford's engineers studied the invention and exhibited interest, but then ignored him. However, when Ford's newest cars were manufactured they used his invention. Soon, other manufacturers did the same, all without payment or acknowledgment of Kearns. Kearns sued Ford in 1978 and in 1982 sued Chrysler for patent infringement. His stated goal was to recover damages and get an injunction to prevent them using the devices as he wanted to manufacturer them himself.

After twelve years of litigation Ford offered millions to settle, but he refused. His lawyer at the time said he thought Kearns could have settled for $50 million from the car manufacturers. Kearns ended up firing some five law firms and maintaining the lawsuits pro se. In 1990 a jury found that Ford had infringed on the patents, but not intentionally. The jury bought Ford's defense that they thought his invention was invalid and they had made substantial improvements. No damage award was made and Kearns did not get his injunction, but another jury awarded $6.3 Million which the judge reduced to $5.2 Million. However, Ford finally agreed to paid $10.2 Million to settle the case after Kearns appealed. Chrysler was ordered by a jury to pay him $18.7 Million and the U.S. Supreme Court refused to consider a hearing. Kearns ended suing some twenty six car manufacturers including Japanese and German manufacturers.

The real story is how obsessed Kearns became over this lawsuit. He resulted in his wife divorcing him and his having a nervous breakdown. His house was filled with legal papers and all he thought about was his lawsuits.

Kearns died of brain cancer complicated by Alzheimer's disease. In his last years he drove an old 1978 Ford pickup and an older 1965 Chrysler, neither of which had intermittent wipers.