The Associated Press recently carried an article by Jill Lawless about Alan Turing who was the genius who contributed so much to breaking the Nazi Germany’s World War II code. This was no small feat and much has been written about the history of this British project. See, for example, Enigma: The Battle 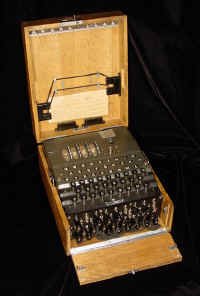 for the Code by Hugh Seabag-Montefiorie. Historically military codes have played an important part of warfare. Armies and ships at sea must be in communication with military centers for orders and current information. Since the airways are open to anyone the communication has to be in code. But, the challenge is each side has experts who are continuously working to break the code and understand the communication.

No matter how sophisticated the code, there are experts who are able to decipher it. The one exception was World War II when Navajo Code Talkers were used in battles against the Japanese. At Guadalcanal, Tarawa, Peleliu and Iwo Jima, native American Navajo’s took part in every assault as members of the Marines. They simply transmitted information in their native language to the total confusion of the Japanese who never were able to understand it. In 2002 a movie about this was released, The Navajo Code Talkers. We broke the Japanese code before the outbreak of World War II which was of enormous benefit to us as we listened to messages without the Japanese knowing we could understand them.

The German code, however, was a totally new and very complicated system. Invented by a German engineer, Arthur Scherbius in 1918, at the end of World War I, it was continuously revised and made more difficult to decipher. There were several initial settings which would change the code each time the machine was used so that the same settings were not used each time making it even more difficult to decipher. There were three wheels selected from a set of five to eight in the machine. The daily 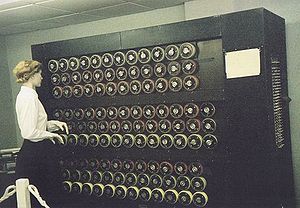 instructions would specify which wheels and the setting of the index ring on each of those. There were ten sets which also Were set up with daily instructions. That created an infinite variety of changing parameters for each day’s use. Not only that, but the German armed forces used a different kind of cipher machine then did the German Navy plus the operating procedures were not the same. The less consistency in use, the more complex finding a solution and the Germans had found a way to create an virtually infinite variety of transmissions. In fact the solution to the code depended in great part to fortuitous chance.

The breaking of the enigma machine secrets began when Poland began studying the machine because of increased German invasion threats. In 1932 a Polish mathematician along with other mathematics graduates began working on the project in the Polish Cipher Bureau. French military intelligence had obtained a couple of pages of daily instructions they shared with the Polish group. With this information

Marian Rejewski made one the most important breakthroughs in cryptologic history by solving the Enigma wiring and rotor settings. In addition, to all of the research by the British, the capture of enigma cipher material in February 1940 was critical to finding the solution. That year, the German sub U-33 was captured by a British ship and the rotors from the machine obtained. Then in May 1941 the Royal Navy captured a German weather ship complete with the Enigma machine, the setting book and even the operating manual. Enigma machines or setting books were captured from a total of seven German subs or ships all of which were invaluable to solving the complex enigma machine code. This captured information along with the British efforts resulted in the allies having access to the German code. A movie was made about the British efforts in cracking the German Enigma machine, Enigma.

One of the key mathematicians involved in the British effort was Alan Turing who is considered the father of modern computers. He worked tireless at Bletchley Park which was the World War II code secret code breaking center in Britain. Turing along with other mathematicians cryptographers and experts spent the time working on breaking the Enigma code. Their efforts marked a turning point in

the war and afterwards Turing and others were hailed for their contributions. However, in 1952 Turing was convicted of gross indecency for having sex with a man. Homosexuality was a crime and considered to be a form of mental illness in Britain until 1967. He was given the option of prison or chemical castration by injecting him with female hormones. He chose the chemical treatment. His security clearance was revoked and he was barred from government work. Two years later, at age 41, Turing committed suicide after eating an apple laced with cyanide although some people thought his death accidental.

On September 10th of this year, British Prime Minister Gordon Brown made an official public apology on behalf o the British government for their treatment of Turing.

An amazing story about a secret code and a man who contributed to saving the allies from defeat in World War II. You might assume that we have progressed from the attitudes about homosexuality of the 1950's, but I’m not so sure there aren’t a substantial number of homophobic and radical evangelical’s in 2009 who would think chemical castration is still an appropriate punishment. It’s frightening to listen to the Fox News and conservative radio commentary about gays and, for that mater, a number of other subjects. So, just far have we progressed in our understanding, compassion and civil discourse?