Sam Kinison was born in Yakima, Washington. His parents were Pentecostal preachers who preached in different churches around the country. Sam followed his dad’s footsteps and became a Pentecostal preacher himself after attending Bible School in New York. His sermons were the old style fire and brimstone approach. However, after he and his wife divorced he gave up the ministry and got involved in comedy starting in small clubs in Texas. His comedy style wasn’t unlike his preaching which featured screams and yelling. His reputation was that of a hard drinking loudmouthed wild man. Kinison’s routines involved screaming about the hypocrisy of television evangelist’s with no subject off limits. After appearances at the 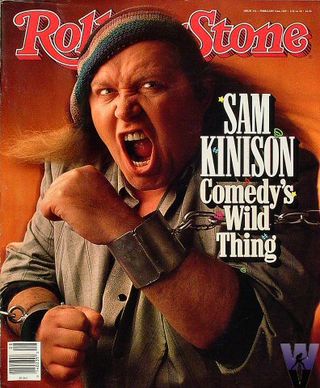 Comedy Store on Sunset Boulevard in Los Angeles, Rodney Dangerfield had him appear on an HBO young comedian special in 1984 which launched his comedy career. He later appeared in a Dangerfield film and made recordings of his comic routine. He made appearances in various television programs as an actor and was on the David Letterman and Johnny Carson programs. Howard Stern had him as a frequent guest as well.

With his successful career Kinison got involved in heavy cocaine use as well as alcohol and other drugs, but before his death had been successful in working to overcome the addictions. In addition, his career took a turn for the better and he was negotiating for a television network show at the time of his death. His personal life also took a turn for the better. A week before he died he married Malika, the woman who had been his constant companion for five years. They spent the last week before his death at the Mauna Kea Beach Hotel in Hawaii on their honeymoon. He was reported as being very happy.

On Friday April 10, 1992 about 7:30 pm, Kinison and his wife were driving in a Pontiac Trans-am from Los Angeles to Laughlin, Nevada where he was going to perform before a sold out audience.  He was sober and drug free. Behind his car was his brother Bill and two other assistants in a van with Kinison’s dog. A couple of teenagers in a 1974 Chev truck were approaching the Trans-am on Highway 95 near the California-Nevada border. They had been drinking and the truck crossed the center line.  Sam saw the truck coming at him and managed to slow his car to 15 miles per hour in an effort to avoid a collision.

In the van behind Kinison’s car his brother Bill saw the truck across the center line and yelled out "Watch out for that guy Sam, That guy’s in your lane" and then he screamed: "Watch him Sam! Watch him!"A tremendous crash followed and Bill skidded the van to a stop. He ran to check on his brother. The teenage driver had moderate injuries but his teenage passenger had only minor cuts and bruises. Sam had not been wearing a seat belt and the crash had thrown hm into the windshield. It knocked out Malika, but Kinison managed to get out of the car with what appeared to be only cuts on his lip and forehead.

His brother and the others begged him to lay down and he did with his best friend, Carl LaBove, who had been in the following van. holding his head in his hands. At first it looked like there were no serious injuries to Kinison, but within minutes he suddenly said to no one in particular "I don’t want to die. I don’t want to die."  LaBove later said "it was as if he was having a conversation, talking to some unseen somebody else" some unseen person. Then there was a pause as if Kinison was listening to the other person speak. Then he asked "But why?" and after another pause LaBove heard him clearly say: "Okay, Okay, Okay.’ LaBove said: "The last ‘Okay’ was so soft and at peace…Whatever voice was talking to him gave him the right answer and he just relaxed with it. He said it so sweet, like he was talking to someone he loved." Kinson then lost consciousness. Efforts to resuscitate him failed. Kinison died at the scene from internal injuries. He was just thirty eight years old.

After his death there was a lot of speculation about Sam Kinison's last conversation with an unseen companion and what was being said to him. I'll let you draw your own conclusions.

35 thoughts on “THE STRANGE DEATH OF SAM KINISON”