Last Sunday Lita and I headed out of Gig Harbor on our boat Lita Theresa. She is a 2006 39' Grand Banks Eastbay style. A very nice size boat with a beam of 13.3 feet that draws only 3' of water. With twin Yanmar disel engines it has a top speed of 30 knots and cruises very comfortably. We were cruising along in warm weather and flat seas thinking what a pleasure it is to be on the salt water. But, when we got to the entrance to 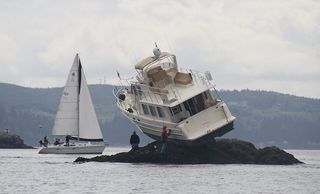 Port Ludlow we saw something white that looked out of place at the far enterance to Mats Mats Bay. As we got closer we were startled to see a large white yacht high and dry on Snake Rock. It was totally out of the water and could be seen for a long distance away.

Later, I saw in the Seattle Times a photo by Marianne Lyle showing the boat on the rock. See attached photo. The paper reported that the boat was the Dream Weaver, a 43 foot 2009 power boat owned by John Weaver, Jr. It said the boat had hit the rocks Sunday, the day we were passing by. It said the boat had "became stranded at high tide." The paper said another boat tried to get it off the rocks unsuccessfully, but the tide was dropping. It reported the boat was re floated around 5:30 pm on Sunday and was being towed to harbor for repairs. I have no other information about the outcome, but it was the first time I had seen such a dramatic image of a boat in trouble.

Getting into the Port Ludlow resort can be challenging due to the rocks in the area depending upon which direction you are entering from Snake rock can be underwater at high tide, but it is clearly marked on the charts, so there has to be an interesting story as to how this grounding happened.

Anyway, we continued on without stopping to take a photo although I was tempted. We went through the Port Tow

nsend Canal at an ebb tide which is always a little intimidating due to the narrow cut and depth. Plus the tide was running strong against us, but we made it through without any problem and continued on to Port Hudson Marina at Port

Townsend. After docking we walked to town and went through shops including a wonderful antique store that's been there forever. We spent the night there and in the morning headed out, around Port Wilson to Haro Straits and on to Roche Harbor. You get to Roche through Mosquito Pass which is a winding kind of route, but well marked. Nevertheless, I always am a little nervous  about staying in the right channel.  Roche was crowded with lots of activity. We spent two nights there and went into Friday Harbor one day. We passed Mona, a camel that has been on farm there for years while riding in a 1954 Mercury as a taxi. It was a fun ride and Friday Harbor is always an enjoyable place to visit. Plus, the weather was perfect. Warm and beautiful.

After our visit at Roche, we returned back the same route on Wednesday to the Port Ludlow Resort, paying special attention to Snake Rock on the way in. On the way, we saw dozens of boats off Cattle Point at San Juan Island. The paper reports one of the biggest Sockeye runs in years going through that very area on their way to Canada. It said in two sets one purse seiner had $100,000 in fish. It made me think back to 1954 when I fished on the seiner Welcome with John Stanich of Gig Harbor. We had a huge year in reds in the same area off San Juan Island. I made well over $5000 which was enough to buy a car, pay for college for a year and have money in the bank. I owe so much to my my years of working on purse seine boats from Puget Sound to the Berring Sea. Working with older men from Croatia, who often had little education and spoke poor English, it turned out to be a better education then I got in college. I was fortunate to have had the experience from the time I was in high school through College. 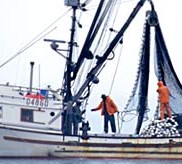 On the way back,  Haro Straits were rough and a little intimidating. The wind was blowing hard and the boat hard to control When we got to Port Ludlow, docking would have been really difficult without assistance from someone on the dock because the wind was blowing away from the slip and I don't have side thrusters on the boat. After 80 degree weather, this day was cold and windy. We spent the night and got a 7:00 am start back home. Fortunately, the wind was gone and the sea flat calm, although overcast and threatening rain. We worked our way through multiple fishing boats and crossing ferries back to Gig Harbor. The depth sounder had quit working for some reason, but we were otherwise in good condition. We were gone only a few days, but it was like camping and it was good to be home. On the other hand, part of my soul is involved with the sea and I need to be involved with it to be a complete person.