On Sunday we visited the Musee Jacquemart-Andre. It was the villa of Edpoard Andre and his wife Nelie Jacxquemart. They were avid art collectors in the new Paris of the 19th century. Their mansion is now a museum and the only one in Paris open seven days a week. It is preserved to show what a mansion of a wealthy family of that time would look like. The art work includes Rembrandt and Botticelli. It was impressive to see.

Most stores are closed on Sunday in Paris which surprised us. We took a long taxi ride to the area where there are shops open on Sunday and Lita walked the streets while I waited and watched people. 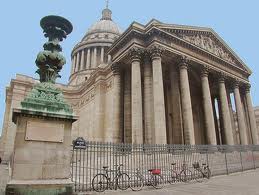 Lots of knee high boots on young women with black stocking up the waist with a mini skirt. It looked both cold and uncomfortable. Men in sport coats and ties. Lots of men and women in tight fitting blue jeans. The men wearing sport coats with jeans. Paris is a place of formal fashion generally.

One unusual feature in Paris are tan colored bikes in racks along the streets. These are Velib – a contraction of “velo” – bike and “liberte.” A European credit card with a chip can be used to remove the bike from the lock up and use it for a few minutes, a day or a week. It can be returned at any similar rack around the city. A deposit for the cost of the bike will be made if not returned. Two hours would cost seven Euros and a week about one hundred fifty Euros. They are being used all over Paris where there is no helmet law. There are some 20,000 bikes for rent around Paris streets. The bike racks are about 300 yards apart.

On Sunday night we went to the location where we are attending the legal seminar.  It was raining.

There were lawyers from around the country and from our state. We met our friends from New Jersey there to go to a bistro for dinner. However, getting a taxi was an ordeal. Awe were standing under cover watching taxi’s go by that were not stopping. A second call was made and finally, after a long wait, our taxi arrived. We were fortunate that we got our table even though we were late. The bistro was packed with tables against tables. However, it was a friendly atmosphere of people drinking wine and having a good time. It was a very nice evening with good friends in a very French place.  A taxi was called and did arrive to take us back to our hotel. We went right up as the seminar started early.

We were up at 6:30 am. My talk was about 10:30 but the seminar started at 8:30 am & I needed to make sure my computer would project my PowerPoint slides. I’m guessing at forty to fifty people in attendance. The session ended at 12:30 and this time we had arranged to have a taxi pick us up. We went back to our hotel which now had policemen around the front. It turns out some African dignitary is staying at our hotel and this security. I’d prefer he or she stayed elsewhere as Paris has been on alert for terrorist problems recently.

Lita went to the hair salon at our hotel. Christophe Robin is the “hair dresser to the stars” here in Paris. It is his salon, but she was to see an employee. When she arrived he was there to the hair of a number of fashion models and dealt with Lita because the employees weren’t there. It turned out that they had made a mistake in making the appoint as the salon wasn’t even supposed to be open that day. He said he would simply fit her in with the models because of mistake. He personally did her hair. While she was there, the actress, Gwyneth Paltrow was having her hair done. A small dog came over to Lita and got in her lap. The dog curled up and went to sleep. It turned out that one of the models was taking care of Paris Hilton’s dog Tinkerbell and this was the dog in Lita’s lap. Quite an unusual day for Lita.

Last night, as we left the hotel for dinner, the front door was crowded with reporters, TV cameras and police. It turns out the dignitary staying here is a Palestinian leader. That’s not a comforting knowledge. I’m glad we are leaving this morning.

We had dinner in a small Italian place last night on the left bank A very good change from the French food we have been eating. Today is our big challenge. Getting our heavy suitcases on the right train for the right destination. I’m forward to this experience.