We ate another unique meal with breakfast. We were given a  wooden, rectangle shaped, tray with six small cups. Inside of each was a different food, like a yogurt, and each was unique tasting and very good. There was a plate with thin ham, small sausage and small cuts of cheese with a small tomato on top. Everything was unusual and an adventure to eat. A very unusual  kitchen and chef.

After breakfast we walked the narrow stone road down and around the corner and down to the lower area below our hotel. We went to the underground pottery museum carved out of the limestone. An 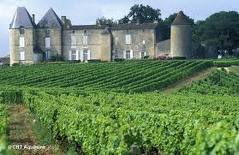 animated French man who sells tickets for admission gave us a history of the area and the museum. He was a wonderful story teller with changing facial expressions and large gestures along with a delightful French accent. He belonged on the stage. The cave is very large and winds into limestone rock a long distance with side caves as well. The ovens and equipment used in past centuries are displayed along the sides as well as a large mixture of pots with pottery. It has also been used for storing wine in the past and that makes a lot of sense because of the cool constant temperature inside.

After that we walked up the rock road back up towards the hotel area. There are a large number of very small shops everywhere in town and here below the main town, but 85% are selling wine things needed with wine. Lots of colorful little shops down winding narrow roads. The town has added a large number of tourists today, but they are all speaking French.  I left Lita and headed back in hopes of sleeping off my excessive wine consumption last night at dinner. To get there I used, with the assistance of a hand rail used to pull me, the narrow rock walk that extends up at a fifty degree angle. It is hard work and I rested half way up.

Back at the room the maid was cleaning so no nap before meeting Lita at the outdoor café in the town square outside our hotel. The sun was up all day and it was a very pleasant place to have a salad (not so great) and a half bottle of wine (very great). Then it was time to join the English speaking tour of the catacombs. A group of about twenty five people were led by a young woman from the tourist office to the bottom area of the church and to get there we used that same steep walk I had come up. The church is unusual because it was carved out of limestone and is very large with high ceilings. Another church was constructed about ground as well. I usually avoid all guided tours and should have this time. Our guide was difficult to understand as she recited her memorized talk like a tape recorder. She was full of information about historical details I would pay not to be told about. There were altars built for saying Mass and places for the burial of  monks and others, but whose remains were long ago removed to other areas. It was a one hour tour I would have made on my own in fifteen minutes, but we couldn’t escape. The door going in was locked with a large key so we were there for whole tour. Once over, we had to go  back up the steep walk way to the upper town level.

Last night, Saturday, we had a drink in the bar where Mr. Redstone and his party were having a drink. We walked a short distance to a very lovely small bistro for dinner. As the sun went down the sky was red and it framed the ornate steeple of the church. It was a very beautiful sight while having a glass of wine in a small French bistro in this attractive part of French.

This morning’s CNN news warns of terrorist activities at major tourist attractions in France and elsewhere. It warns of staying away from “crowded” places. Not very reassuring for us going through the Paris airport Monday.

We went to Mass here. The church has an arched ceiling a hundred feet or more high.
At the altar end there is a huge stained glass wall about 35 feet wide and 70 feet high. This is an “all purpose” church since an image of Our Lady of Guadalupe (Mexico) is one wall, an image of the Shroud

of Turin (Italy) and an altar devoted to one of my favorite saints, the Cure d’ Ars (
France) The priest entered with ten altar servers of all ages dressed in red and white. Everything was sung, which takes a lot of time. When he read the Gospel one of them swung the incense back and forth causing an ever increasing cloud of incense to develop until I was having trouble seeing the priest in the cloud. His sermon, in French of course, lasted over forty five minutes. Any concern over paying for my guilt was taken care of after this ordeal.

We met our driver who drove us to Bordeaux. It was a very good experience. He dropped us off at the outdoor Sunday public market along the river. It was crowded with locals buying bread, food, flowers and many other things. People were buying food from vendors and eating. There was wonderful cheese, fresh fish and everything you would need for dinner being sold. It was a lot fun. There are about 250,000 people in the city proper. It has a large opera house and as cathedral as well as many other beautiful buildings. On Sunday the main part of town is closed to cars so walking is enjoyable. The driver pointed out windows that were bricked shut. He said it was because the tax calculation included windows, but the city buildings were clean impressive. We walked to the Opera House area from where we were dropped off – a mile or more. The French were very helpful in giving us directions. We ate an an outdoor café at the Regent Hotel across from the Opera House. A nice salad with red wine.

From there we drove back to Saint Emilion and stopped at a small winery just a few miles from town. The owner was a friend of the driver and gave us a wonderful tour and lecture in excellent English about the process. We drank some of his wine while he showed us magic tricks he was very proud of – an interesting combination of talents. The vineyards go for acres and acres. There are some 10,000 plus vineyards in the general area and this one is very small by comparison to others.

When we got back to the village Lita went to the store that carried this vineyard’s wine. The owner said he had been out for months and had people who wanted it. He called the owner for her and asked if there was any he could supply.  The store owner laughed and later told Lita that the man at the vineyards  was in love with her and he had agreed to provide wine for our purchase.

Tonight the hotel has no food so we will eat out at one of the cafe’s again. Tomorrow we are up at 5:00 am for our ride to the airport in Bordeaux and from we change planes in Paris for our flight home.

This is my last report and trip has been outstanding. The French have been helpful and friendly. The food outstanding and the wine excellent.