Yesterday was our office Christmas party. Our office claims representative for many years and my childhood friend, Nick Petrish,  has been out of the office undergoing treatment for medical problems, but he made it to this meeting. I showed some photos from our Anacortes high school days together and Rich 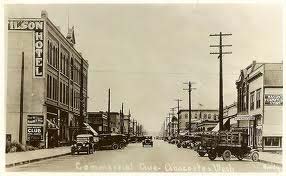 Weyrich, the Skagit County Prosecutor, who is also an Anacortes graduate, sent along an old Anacortes  American of 1954 because it had a picture of Nick on the front page as captain of the football team for the homecoming game against Snohomish High School. The article said Anacortes had last defeated Snohomish in 1941.

I took the time to read over the paper. It had reprints of articles published years before along with the news of 1954. The publishers were Wallie Funk and John G. Webber. The managing editor was Cliff Danielson .  As I read it over, I was struck by the changes in prices and the old articles because of their language in reporting about the Chinese who worked at the fish canneries. Here is what I mean:

In  July 1889 the lead to an article said: "Heavy Sockeye Run Seen. Canneries going at full Blast. Chinese Complain of ‘Too Muchy’ work." The article went on to report:

"The force at the cannery is working to its full capacity for work. Even the meek Chinese are beginning to say, "Gee Chli, too muchy work." …"

Now thats not something you would read or hear in 2010. The other thing of interest was the tremendous changes in prices. Look at these ads.

Butler Appliance was advertising a compact oven for $189.95

Francisco Webber real estate was advertising a "nice nearly new 2 bedroom home, double garage, fireplace $10,700." Utterstrom Reality was advertising that  "we have some excellent buys in older homes and as low as $3,500."

Snyder’s Pharmacy has an ad for "A truly remarkable new medical discovery which offers fast relief from nagging, crippling agony of Arthritics, Rheumatism, Neuritis and neuralgia…."

Snyder’s Pharmacy at 504 Commercial was only a short distance from our family’s grocery store and where we traded. I was very interested in chemistry and had chemistry sets. I conducted experiments in our basement which often sent horrible smells through the house. I bought my supplies from Mr. Snyder, who was a very nice man. One day I found the formula for gun powder and went to the store to buy the necessary ingredients. Mr. Synder, being a pharmacist, recognized the purpose and called my dad. It was hard to get away with anything in a small town.

So, there you have it. A brief glimpse back in time.